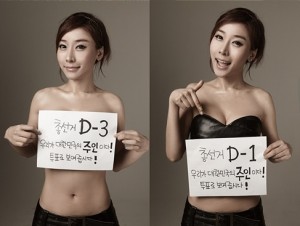 It’s difficult to find a piece of news concerning singer/actress/gagwoman Kwak Hyun-hwa that isn’t controversial in some way, shape, or form.  A simple Google search of her name pulls up not a bunch of immediate references to dramas or industry activities in which she has participated, but a slew of articles condemning her for some envelope-pushing stunt or another as well as a healthy number of images in which she is quite scantily-clad.  And then there’s this incredibly low-budget and supremely tacky music video for her song “Psycho,” which was roundly criticized for its overtly suggesting imagery and inappropriate attire.

Recently, Kwak has (in keeping with her apparent fondness for stirring the pot) made headlines for two instances of shocking behavior.  The first involves her seemingly self-created campaign to increase voter turnout in recent South Korean elections: three days before the elections took place, Kwak uploaded a shirtless photo of herself to her me2day in which her chest is covered by a sign exhorting citizens to exercise their right to vote.  The second involves this photo of her…uh, eating a banana. 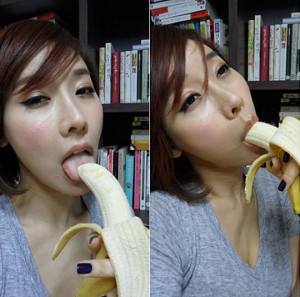 Well.  I mean, what does it look like to you?

When I first saw the photo and read a number of articles criticizing Kwak for her outlandish behavior, I was doing some Olympic-level eye-rolling.  Don’t get me wrong; as I have stated before, I’m all in favor of the injection of some healthy sexuality into the Korean entertainment industry, but Kwak’s photo was just too much and (quite frankly) too utterly stupid.  It accomplishes nothing and indeed probably takes sexuality and women a few steps back.  Additionally, her denial of the photo’s sexual nature was laughable (“What is wrong with this picture?  How can I eat bananas in a way that doesn’t seem dirty?”); there is basically no way that Kwak, with her reputation and experience in the industry, could not have known that a photo of her eating a banana would be taken incorrectly.  How do you eat a banana in a way that doesn’t seem dirty, you ask?  Here’s the answer: don’t take a picture of yourself eating a damn banana and then post it on the internet.  Essentially, Kwak’s excuse-making sounded a lot like the excuses that entertainment companies and idols make when one of their songs or choreography gets banhammered.  “Oh, we never imaaaaaaaagined that people would take the song’s lyrics/see the choreography thaaaaaaaaat way!  We’re just soooooo sorry — here, let us make it up to you.  Despite the fact that we were given less than 30 hours’ notice about the song being banned, we’ve somehow devised and taught the idols entirely new choreography, which they will perform flawlessly on the next music program.  All forgiven, right?”

But then I thought about it a bit more.  And yes, while it certainly seems that nearly everything Kwak does is designed to shock, offend, and basically just garner a lot of attention for herself, it is a bit ridiculous to lambast her every single time she does something that…well, is pretty much exactly the same thing as what nearly everyone else in the industry is doing.  The problem here is that Kwak has earned an unfortunate label for herself as something of a Shameful Harlot, while others whose reputations are far more squeaky clean can more or less act with relative impunity.

For starters, that photo of a shirtless Kwak holding a sign over her chest?  Yeah, someone else did that before.  Can you guess who? 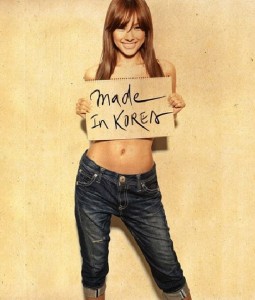 Yes, this photo is taken from the photobook that accompanied Lee Hyori’s third album It’s Hyorish.  You probably don’t remember her encountering any backlash for it, and there’s a reason for that: she didn’t.  If you’re having trouble seeing how this picture is different from Kwak’s, well, join the club.

But what’s worse is that it is apparently all too easy to find images of Korean celebrities eating bananas; in fact, they’re practically a dime a dozen.  Here, my fellow writer Fannie was nice enough to mine some for you: please see this, this, this, this, and this.  As well as this: 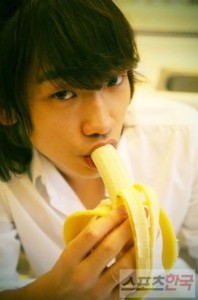 And let’s not forget this GIF from 2PM and 2AM‘s infamous cover of Brown Eyed Girls’ “Abracadabra.”

In case our readers are unaware, here is a fun fact about these photos: they’re all of male celebrities.  Coincidence?  Eh, probably not.  And the sad thing is that this is nothing new.  As Amy pointed out just last week and even last year, female celebrities are held to a bizarrely high and wildly different standard than are male celebrities.  Is there anyone out there who was so genuinely offended by “Dirty Eyed Girls” that they felt the need to take to the internet and leave a comment other than “LOL OPPAS!”?  Did Rain‘s career come tumbling down because he snacked on a banana — and was photographed doing so?  Is Nichkhun no longer permitted to appear on variety programs due to his odd stroking of a banana?

I’m not by any means defending Kwak Hyun-hwa; as I said before, I generally find this and all of her other publicity stunts to be utterly counterproductive and beneficial to no one but herself.  But it is really difficult to see her as a villain in this case when the exact same behavior is either overlooked or outright encouraged when done by either a male celebrity or a female celebrity whose reputation hasn’t been irrevocably tarnished by her involvement in some less-than-clean business.  I’ve been languishing in the K-pop fandom for too long at this point to expect continuity or consistency, but it’s getting a bit ridiculous; I half-expect that Jon Stewart and The Daily Show team will take a crack at it any minute now. 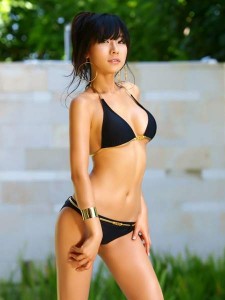 Rather than offering up some pathetic and half thought-out excuse about eating bananas, I wish Kwak had gone this route and hurled back a ton of pictures of male celebrities eating bananas or doing other generally inappropriate things.  We here at Seoulbeats are just a bunch of spectators who spend a lot of words on this sort of stuff, but ultimately have very little power in actually effecting change.  If Kwak could use her relative celebrity to fight against the wave of criticism with a dose of common sense, people might actually pay attention and realize that the world of Korean entertainment is governed by a set of increasingly gross double standards.

What do you think, Seoulmates?  Are you offended by Kwak’s latest stunt?