f(x) Has a Winner with "Electric Shock"

SM, you are on fire this year — oh how long I’ve waited for a mini like this from f(x).

To start off, “Electric Shock” isn’t a wow fantabulous breath-taking mini-album. This is not a mini that’s strong from start to stop; a good half of the songs continue to have the messy, electronic sound that is f(x)’s (and SHINee’s) trademark — a sound that still feels too experimental. They sound different from a lot of the songs in the current scene, but aren’t exactly good. They make you tilt your head and go, “Huh” when you listen to them, but that’s it.

제트별 (Jet) and 지그재그 (Zig Zag) are the two throwaway songs on this mini that sound like unfinished experiments. There’s a lot of the annoying talky-rappy lyrical delivery that we’ve been plagued with since the Nu Abo days, mixed in with oddly placed drumbeats, instrumental sounds, and an overall weird tone. The cringe-worthy English (“Boy we fly high fast-ah, this only gets bett-ah,” “Just like a butterfly!”) and chirpy choruses are just the icing on the cake to make these songs absolute nuisances.

The title track, the namesake Electric Shock feels like a continuation of “Nu Abo.” “Electric Shock” is the faster-paced cousin to “Nu Abo” that rights some of the wrongs that might have detracted from “Nu Abo.” It’s not all gone, but it cuts away a lot of talk-rapping and substitutes it with just good ol’ singing. How novel, right?

“Nu Abo” had the problem of being one huge block of monotone throughout the entire song until it hit the bridge [verse – chorus – verse – chorus – bridge – chorus] — which, to be fair to “Nu Abo,” a lot of songs do, but didn’t mean that it sounded particularly good. 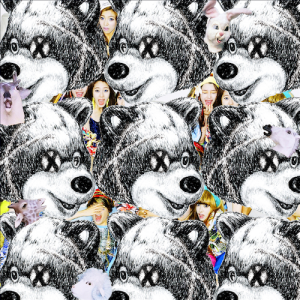 The bridge in this song is the best part because it’s so unlike all those deliberately high-impact bridges in f(x) songs, where Krystal builds-up and then Luna finishes off with a window-shattering high note. Krystal splits the bridge with Amber, whose singing SM has already teased us with bits and pieces before, but are finally properly utilizing for this mini.

“Electric Shock” is not my favorite, but it’s definitely a step up from “Pinocchio” and keeps that f(x) sound while improving on it. It is a grower, though, and I can see it doing well with Korean audiences.

From the previews from the highlight medley released prior, I was afraid I would walk away not liking any track off the mini-album, but barring “Jet” and “Zig Zag,” I really (really, really) love the rest. Love Hate has a deceitfully annoying chorus that belies how lovely the rest of the song sounds. The verses are pretty and the singsong melody is sweet. If you also singsonged “Ali Baba” after Krystal, you get what I mean.

Beautiful Stranger is, yes, extremely derivative of Katy Perry‘s “ET.” But looking past that, how bomb is this song? This is probably the most “mainstream” sounding pop song f(x)’s sung, and probably why the reaction towards this song has been the most positive so far. I can really do without all of Amber’s rapping, but once again, it’s great to hear her sing this song, her range goes perfectly for a song like this.

My favorite track off the mini, by far, is 훌쩍 (Let’s Try). The song starts off sparse but gradually builds and adds layer. I like the call and response in the singing. There’s just something in the vocal and harmonic arrangements that I had a very positive gut reaction to upon first listen. The lyrics are also fitting of the feel of the song:

The reason why I think this mini works for f(x) is that the songs work around the members’ strengths instead of forcing the girls to do things that aren’t their forte, or limiting what they can do to suit songs they’re given. Amber should have never been designated to rap and we should have never had to sit through three mini-albums and one album of her doing feature raps instead of singing. The feeling of the songs all of a sudden got a lot less silly because Amber’s graduated from her stilted rapping.

Sulli’s not a strong singer, but it was highlighted more when she had to sing and talk-sing in registers higher than her natural one. She’s steadily improving with each release, and it really helps when SM is not making her sing like a baby. It goes without saying that Luna’s a great singer, and it’s nice to see SM let her sing a bigger range of things. For a lead vocalist of a group with only five members, Luna gets a shockingly low number of lines. That problem seems to have been happily remedied in this mini.

Overall, I’d give the album a 3.75 out of 5. This mini is solid, but in the context of f(x)’s past work, it’s downright strong. Let’s hope that SM keeps working with the girls’ strengths and giving them heavier material as they continue to grow and mature as artists.