Another week, another rookie group makes its way onto my list. BTOB (Born To Beat) is one of the newest male rookie groups to try their hand on the K-pop scene. Under Cube DC, a division of Cube Entertainment, BTOB made their debut this past March with two title tracks, “Insane” and “Father.” After just two months, they’re making a quick return to the scene with their latest single “Irresistibile Lips,” which tells the story of lost love that is being sought after again. And of course the female focal point of the MV, actress Seo Woo, just happens to have a pair of irresistibly luscious lips which helps to further dramatize the intent of the song.

For a rookie group, this comeback single carries some lightweight intensity and the MV contains a dramatic plot, as well as your standard guyliner, running scenes, and standard K-pop choreography. The song itself is really catchy and the vocal arrangement is well balanced in terms of pitch, though perhaps a little on the higher side. If you want to put BTOB into some perspective, they sound similar to B2ST minus Junhyung’s heavier raps. Let’s see how this rookie group will (or won’t) impress us: cue the review for BTOB’s “Irresistible Lips.” 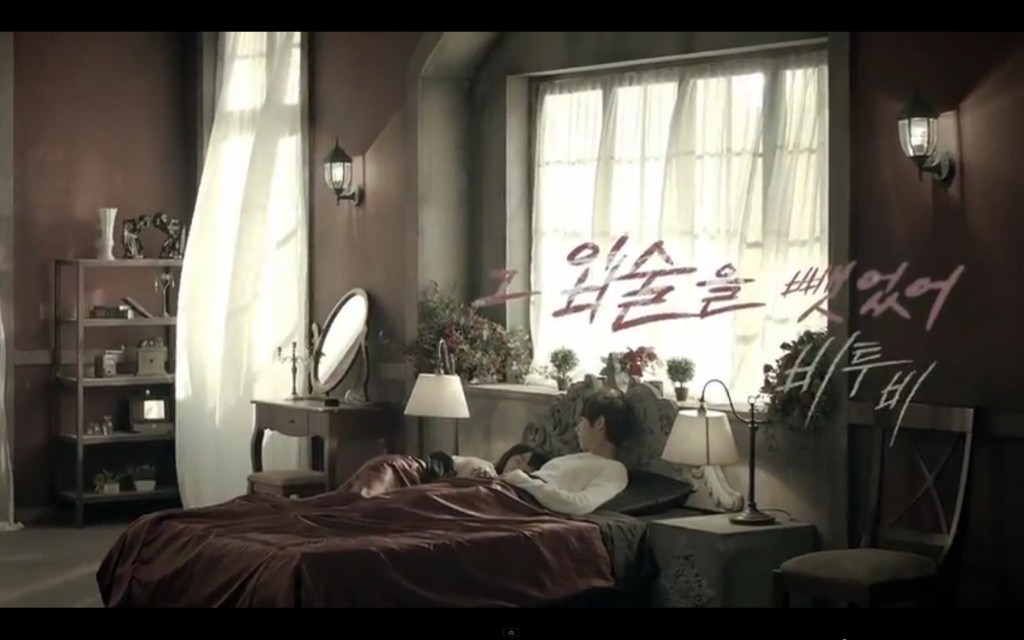 Obviously they went with the prettiest member as the lead role in the drama of the MV, but hey, it’s not like it’s never been done before. The drama goes a little like this: we open on said pretty boy running through what looks like an empty industrial park, then we are shown scenes or “memories” of happier couple days, leading up to our actress walking down the aisle in black dress to a man that is not our pretty boy. Instantly in another flashback, we see the fight that ended all fights between the couple and drove them apart, but the lovely pretty boy BTOB member has come back to claim what is his, and surprisingly, the drama finishes with the couple once again side by side.

You really couldn’t have asked for a more cliché story line, but it was done as tastefully and as theatrically as you can get in an MV. The color palette has a lot of black, grey, nude, and browns, but was contrasted with feminine reds, pinks and even an occasional green–which created a lot of harmony within the drama sets. The same can’t really be said for the dance sets however; the harsher colors and the intense choreography didn’t compliment the story or the passion in the lyrics as much as I had hoped it would. The sequencing of the drama was arranged well, and while typical, it held my curiosity. So, high score because cinematically I was pleased.

Min-hyuk, the member with the lead male role in this MV did a fair job acting, and so did his female counterpart Seo Woo. The energy and drama of the song were present as it seemed appropriate, but I truly cannot get over my dislike for the random choreography. It’s very generic, and seems interchangeable with pretty much any other standard K-pop song of similar tempo. It may be just being nit picky, but it’s hard to get into choreography that has no flow with the song itself. Also, the line distribution seemed a bit off, as I can really only recall three or four distinct voices after watching the MV.

For a rookie group, I’ll give them a pat on the back for spicing up my life with a decent drama-dance plot scenario. But it was still a cliché story line and didn’t offer any thought provoking message nor did it challenge my thinking about the MV as a whole. The only thing about the plot that surprised me was that he got the girl back at the end. Normally these things end with crying in the rain or fading CGI pictures…

Overall, I’m impressed with the talent in BTOB and with how much I actually liked ”Irresistible Lips.”  Be sure to keep an eye out for BTOB and their work in the future–they seem promising!