K-pop Diets and the Logical Disconnect 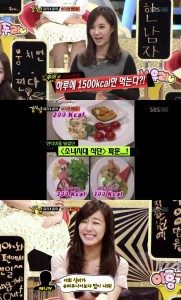 After twenty-something years on this earth, I’d like to think that I have a fair sense of how to maintain a balanced diet and healthy body.  Vegetables are always good to include where and when possible (though I still refuse to touch broccoli or cauliflower), fruits make an excellent and nutritious snack, protein is a daily must, and maybe try not to eat a pint of Ben & Jerry’s every day; additionally, stairs > elevator, gym = good, and 15-minute workout videos are your friend.  Of course, that’s just me — and it’s not always possible (or even a good idea) to stick to such a plan all day every day.  Sometimes, you just need to eat a pint of Ben & Jerry’s, and that’s perfectly fine.  But in general, if one doesn’t deviate too far from their comfortable diet and exercise plan too often, one should feel happy, healthy, and proud of their body, no matter the shape or size.

Then again, I guess it’s a good thing that I take my diet and exercise cues from common sense and not from K-pop, the land of completely schizophrenic diet plans and celebrities who all but lie through their teeth about what they are eating.

Admittedly, this is a hyperbolic statement.  However, it’s impossible not to notice that there are two distinct trends that emerge in the world of Korean entertainment when it comes to dieting and working out — and interestingly, they contradict each other completely. 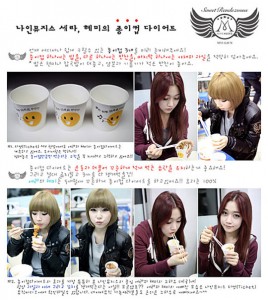 The first would be the Absolutely Ridiculous and Completely Impractical Diet Plan, of which K-pop has seen a good deal.  These range in severity (and hilarity) from Park Bom‘s lettuce and corn diets to Nine Muses’ “paper cup diet,” in which three paper cups are filled with fruit, rice, and side dishes — and only what fits into the paper cups may be consumed.  Also falling into this category are bizarre and worrisome admissions of obvious malnourishment; in early 2011, Secret confessed to Sports Chosun that they normally are only allowed to eat egg whites or soy milk on days when they perform on music programs (salads, they said, were a rare luxury, and the dressings with which they could eat them were limited).  Brown Eyed Girls‘ Ga-in also claimed to drink coffee to satisfy her stomach in lieu of eating.  These “diets” (if one could call them that) are not only blatantly unhealthy, they’re also completely contrary to what somebody expending a significant amount of calories on performing (or, in many cases, simply just being awake) should be eating.  At best, they make no logical sense; at worst, they encourage young people (largely women) to shortchange their body and make unreasonable sacrifices at the expense of a skeletal figure.

Then there is the “I Don’t Diet or Exercise, I Just Look Like This” cop-out, of which a number of celebrities are guilty.  Whenever this excuse is proffered, it is often accompanied by a picture of the celebrity in question sitting in front of either a giant and lavish meal or junk food — proof, of course, that they are not lying!  The most recent culprits would be SNSD, who once claimed that they eat 3000 calories per meal and don’t undergo any special diet or exercise in order to maintain their figures, and Sunny Hill‘s Joo-bi, who apparently dines on samgyupsal, a fatty bacon-esque cut of pork, whenever she feels like it and still looks awesome.  Goo Hara once said she eats whatever she wants and stays slim by virtue of her “fast metabolism.”  Other examples would be anyone who ever tried to act as though they weren’t at a dangerously 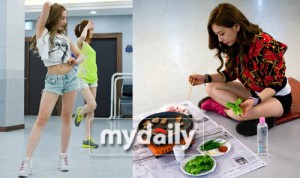 unhealthy weight or that they were “fat”; on last week’s episode of Happy Together 3, Tiffany said that even though her profile lists her as weighing 45 kilos (99 pounds), it’s really more like 46 or 47, and SISTAR recently claimed that they aren’t “sknny like other girl groups.”  I mean…am I supposed to be convinced of something here?  On what planet is an admission of weighing 46 or 47 kilos (at 5’3”) a dramatic revelation of how sooo not skinny someone is?  Again, at best, these sorts of excuses make no logical sense, and at worst, they advocate unhealthy lifestyles while promising unrealistic or impossible outcomes.

The problem here is that very few people in Korean entertainment are willing to engage in an honest dialogue about diet and exercise.  It simply cannot be healthy to consume only as much food as you can fit into three paper cups, but nor can it be healthy to eat fried chicken and the aforementioned pint of Ben & Jerry’s every night.  Korean entertainment seems to oscillate between these two extremes, neither of which really presents a completely realistic or completely practical image of maintaining one’s figure.  Idols themselves seemed to be locked in a lose-lose situation; admission of how little they truly eat earns criticism, yet exaggeration of one’s diet to ridiculous extremes earns scorn.  Similarly, they must try to be as skinny as possible without being seen as trying to be as skinny as possible.  When SISTAR tried to say that they were “fat” as compared with other girl groups, they were (I assume) trying to be more realistic and relatable, but their actual appearances (perhaps minus Hyorin, whose curves are amazing) are almost nowhere near realistic or relatable to the average female.

South Korea’s entertainment industry doesn’t exactly have a stellar track record when it comes to openly discussing controversial issues, but nobody’s buying the current dialogue about diet and exercise within the idol world — and it would be great if people would start saying so.  It’s 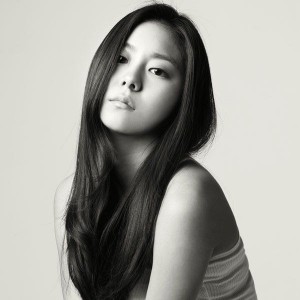 about time that somebody expressed something other than envy when a Korean singer posts about his or her impossibly paltry or impossibly large diet, and it would be great if more celebrities who diet like normal, healthy people — by exercising moderately and eating well-balanced meals — would speak up.  After School‘s UEE won praise for emphasizing that starving oneself is not the right way to go about dieting, but so far, she’s just about the only one who has ever (a) challenged preconceived notions about losing weight in the idol world, and (b) done so realistically by providing an accounting of how she eats to avoid falling into an unhealthy trap.

It would be absolutely wonderful to hear a new tune about dieting and exercise in Korean idoldom, given that so much of the current dialogue is utterly counterproductive.  What do you think, Seoulmates?