Idols on Broadway, and Why it's Sort of Okay 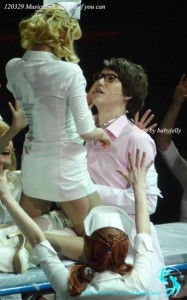 Idols. They’re entertainers, personalities, jack-of-all-trades, MCs, RJs, and somewhere down the line, maybe even actual singers. Idols are notorious for occupying every nook and cranny available in the entertainment industry – they’re up in your favourite variety shows, trolling your drama castings, and serenading you from the radio. And the most recent route taken by idols? Musicals.

“Fame” and “Catch Me If You Can” are recent musical productions that have caught the eye of many international fans due to their notoriously idol saturated casts. However, just like with any case of idols wriggling out of their preconceived niches, the presence of them in musicals bring along quite a few negatives. For one, obviously the casting of young idol stars mean more experienced and able musical actors are put on hold or are forced into double roles with younger and greener idols. More than that though, the constant casting of idols also means that fresh and budding musical actors are going to have a long race ahead of them before they can finally make the big leagues, what with all the eye-candy taking their roles.

However, the venture that idols take into musicals is one worth supporting.

One of the harshest and most excruciating realities of being an idol is the training life. Some start as young as eleven, and it can take almost eight years for them to debut. Others are luckier and debut within months. However, for those without the blessing of an early debut, life is hard. Training is an extremely heavy-duty commitment; it can consume an idol’s life almost completely during their adolescence–years when most others their age would be gaining an education in school, vying for an attainable and stable future. During this time, what do these future-idols do? Wrack their bodies with enervation, with the notion of simply lasting five years in the entertainment industry as the light at the end of the tunnel.

That being said, it isn’t surprising that idols are branching out into different fields. Lacking a sufficient foundation for education, many foregoing college altogether, and having spent what was meant to be their time to ‘grow’ practicing hours on end, entertainment is truly the only career path that would be worth the fruit of their labours. However, a solo venture isn’t an opportunity open for everyone. Being a successful solo act is difficult; in fact, how many solo acts have fallen into the shadows of idol groups? AB, NS Yoonji, G.na, R-UN, ZIA, Joo… goldmines such as IU are rare and few. And it isn’t simply a matter of talent – G.na, R-UN, Zia, and Joo are all plenty talented people, definitely more talented than other successful acts such as Hyori and Hyuna. However, they simply lack the boost, inherent star power, and good fortune that’d allow them that successful solo venture. Let’s face it, to be a good solo act you have to be either a complete bombshell of a singer so that you stick out amongst the industry, or you need to have an inherent star quality in you.

So what about those idols singers who, although perfectly talented in their own right, don’t have the staying power to reach for a solo venture beyond their group do?

They try out for musicals.

Super Junior’s Sungmin once sat down for an interview with Seoul Newspaper about his stint in the musical ‘Jack the Ripper’. One answer particularly was particularly eye-catching:

Sungmin: I’m not doing this as a short stint. Except for Super Junior activity, all my individual time is spent on doing the musicals. Musicals are big part of my life.

This quote by Sungmin is exactly why idols that put their effort into musical ventures should be supported. 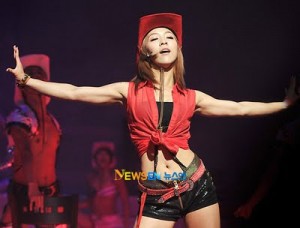 Musicals are a way for idols that want to keep on singing to obtain a future where they can do just that. Not every idol, talented or not, is guaranteed success after their shelf life is reached. Musicals are an avenue available to them where they can put the years of training into use and perform on stage, without any reservations of how many fans they have. With a few exceptions, most idols cast in musicals thus far all have a semblance of vocal talent and a definite potential to improve — unlike dramas, where the sheer amount of incompetent idol actors is enough to give any avid drama watcher an aneurism. Also very conveniently, musicals are the perfect way for people who overact to come across as average-decent.

With the exception of “Fame” and “Catch Me If You Can,” both of which were heavily backed by SM Entertainment, most musicals require idols to go through an audition process. Of course the star power of the idols are taken into account, but you can be assured that if the idol is an actual travesty, the production team isn’t going to cast them. When musicals are run for the second and third round especially, it’s more likely the idols who are cast are genuinely cast for their ability to fit the role, the idea of star power, although still prevalent, is less of a priority since the musical is already in demand.

Rest assured that in the world of musical theatre, unlike dramas, if a better more able actor auditions for the same role, at the most the idol will get to share the role. In this sense, no one who’s more able actually misses out on performing, due to double, triple, and even quadruple castings being quite common. Which is why everyone was scratching their heads when it was revealed it wasn’t Jungmo and Tiffany sharing a kiss on-stage for their musical “Fame”, but in fact Jungmo and another actresses who was sharing the role along with Tiffany.

Musicals can also benefit the idol’s skills and groups as a whole. They require a lot of time to practice, and the skills idols gain from attempting musicals are bound to benefit them when it comes to their performance outside of the musical. Even amazing singers can get better through the advice and criticism they receive from musical critics and audiences. Super Junior’s Kyuhyun, an amazing and very potent singer, was also interviewed for his musical debut with ‘The Three Musketeers”, and said himself:

Kyuhyun: Of course I get hurt sometimes. But I know they are a big help to me. There are a lot of people who leave malicious comments about me. Those who leave malicious comments and attack some other aspects about me regardless of whether I sing, act or appear on variety shows. But the audiences who write musical reviews give me advice after watching my musical performances. They are not people who just hate me. They talk about things that they didn’t like after seeing my performance. I like them because I can learn about things I need to fix.

Idols aren’t put on a pedestal simply because they are idols, and rest assured there won’t be comments about how cute and passionate an idol’s expressions or kiss scene in a musical is. If even idols such as Kyuhyun, one of the best singers in the industry, are susceptible to criticism, then there’s room for everyone to improve. And of course, if any idol does attempt to half-ass their effort in the musical industry, they will be torn into. Not simply by malicious netizens, but by actual critics.

Most of all though, it does mean that the idols who do try, and who do put in the effort can finally have a medium in which to express their passion for singing. It’s not just about idols finding another part of the entertainment industry to pollute – but about idols who want to live their lives musically, to achieve that dream. For people like Dana and Lina of CSJH, Jay from the TRAX, or even kids like Onew, Luna, and Yesung, who have the popularity but not significant relevancy (or vice versa), musicals are a way for them to find a place on stage simply by hard work and talent, and not by all the other baggage idols are required to carry in order to have a successful solo career.