Blades of Blood: Revenge and Aspiration

Set back in the Joseon era, Blades of Blood is a tale of greed at its finest. The Japanese are about to invade Korea, but internal turmoil between the East and West have the country’s people questioning the reliability of the Kingdom. As a result, a rogue group of soldiers, the “Grand Alliance,” has taken it upon themselves to step up to the plate. However in doing so, they find themselves facing the empire as well. Unknown to some, their leader (Lee Mong-hwak) is power hungry and determined to take the throne. Slashing his way to the top, he crosses paths with Kyeon-ja, an illegitimate son with little prospects. Kyeon-ja becomes determined to get revenge and sets off to find Mong-hwak, travelling with a blind swordsman (Hwang Jeong-hak) who has business with him as well. All the while, the eve of invasion approaches. 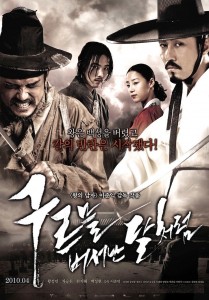 Acting:
To be honest, although I knew that Cha Seung-Won (The Greatest Love, Athena)  was headlining the drama I had my eye on Baek Sung-Hyun (Big). He has got the misfit underdog role nailed down. As expected, Cha Seung-Won gave an excellent performance.  One thing that did surprise me though, was the slight mention of a love triangle that included the two and Han Ji-Hye (The Duo, East of Eden). It just seemed so awkward, no matter which way I looked at it. The last of the trio, Hwa Jung-Min, completely immersed himself in his role and made a blind swordsman about as believable as one could be.

Story:
The movie starts assuming that you somehow already know what’s going on, forcing you to make the extra effort to figure things out. It took me at least fifteen or so minutes, and even then I was boggled at who the bad guys were; the East, West, Grand Alliance, Emperor, who? I am not saying I wanted a distinct line between good and bad, I just would have preferred that some more information be given for me to choose on my own.  With that, it takes a bit to get things rolling.

The film is an adaption of the Korean graphic novel Like the Moon Escaping from the Clouds, and in result things are bit comic book like; which is both a negative and positive. For instance Kyeon-ja is an enduring character and in some ways he is like the Joseon era Batman. But then we get to Jeong-hak, the blind swordsman, and things start getting slightly cheesy and cliché. What bothered me the most was the conclusion, it seemed more fitting to an epic graphic novel rather than a near two-hour movie. 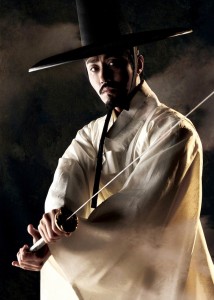 Impact:
Like many action movies things are pretty forgettable with more visuals than substance; which is okay, because we all occasionally want to feel like a badass swordsman. However, for some reason I couldn’t shake off the likelihood of any of it actually happening. I know, I know, not everything has to be realistic; but it’s like taking Kung Fu Panda and making it a live action. Yes, it’s a horrible simile, but the point is that it wouldn’t make sense. You’d be questioning the logic behind animals in shorts or how a praying mantis can fight on par with a 300 pound panda; and you’d lose yourself in thought. In this case, I was willing to go along with the fight sequences, but when it came to the story I was gone. So when things ended, all I remember thinking was, “that’s it?”

That being said, the good that comes from this film is Kyeon-ja. All his life he has been branded illegitimate; a huge deal at the time. And for anyone who has been called something by others there are only three things that can be done; accept, ignore, or refute it. Kyeon-ja has chosen to let the word define him and is forced to learn that he is his own person as he goes deeper into his journey. In essence, the whole situation kind of teaches the viewers an important lesson. We shouldn’t forget that we, individually, are the ones who determine what type of person we are; not others.

Production:
With an A-List actor like Cha Seung-Won it was to be expected that he would be the face of the movie. However, with his image on almost half of the posters it was almost shocking to learn that movie encompasses the journey of three men rather than one; so more viewers for the price of leaving them in the dark.  And of course with big names there’s a big budget. In effect, things looked crisp, and the sword fighting was well above loud clanking and impossible stunts.

Call me a girl, but periodic sword fighting with a mediocre plot just doesn’t do it for me.