After months of tedious waiting, overly drawn out promotions, twenty-three-too-many teasers, two prologues, and two showcases, Exo Planet landed on earth and made its long-awaited debut. Now originally, I didn’t give a jot about Exo. They were the least of my priorities, the last of my concerns, and entirely unsignificant to me. But then, somehow along the way, I fell in love with them. I don’t remember why and how exactly, though I’m sure it had something to do with Lu Han’s pretty face and the amazing-sounding songs they kept teasing us with.

So I, along with a few other members on the team, became a full-fledged EXOtic. I eagerly awaited whatever they did, watched countless fancams of their showcases, and had high hopes for their debut. When I saw the music video teaser of “MAMA,” I was overjoyed. It looked fantastic. In my head, I prepared myself for the epicness to come. I imagined what the MV would look like, what I was to expect, and greatly anticipated writing this article so I could express my fangirl feelings for the whole world to see. So perhaps it’s my fault that I’m so disappointed by this debut, because I set my hopes too high.

Both versions of the music video begin with Exo’s backstory, a strange tale ripped out of the pages of science-fiction and narrated by what sounds like Albus Dumbledore. The English is ridiculous and actually, this whole thing is ridiculous. People often accuse YG of being try-hards but Exo’s concept is the most try-hard thing I’ve seen in K-pop. It’s so overdone. They’re from outer space, they have this backstory about a tree, they have super powers, they’re monks, and let’s just forget about how incredibly over-dramatic “MAMA” is. All this wasn’t a suddely epiphany I had when watching the MVs — it’s been clear from the start that SM is trying really, really hard with Exo. And this honestly never bothered me too much, and I loved the nerdiness of it all when I watched the MV teaser. But now… I’m disappointed. 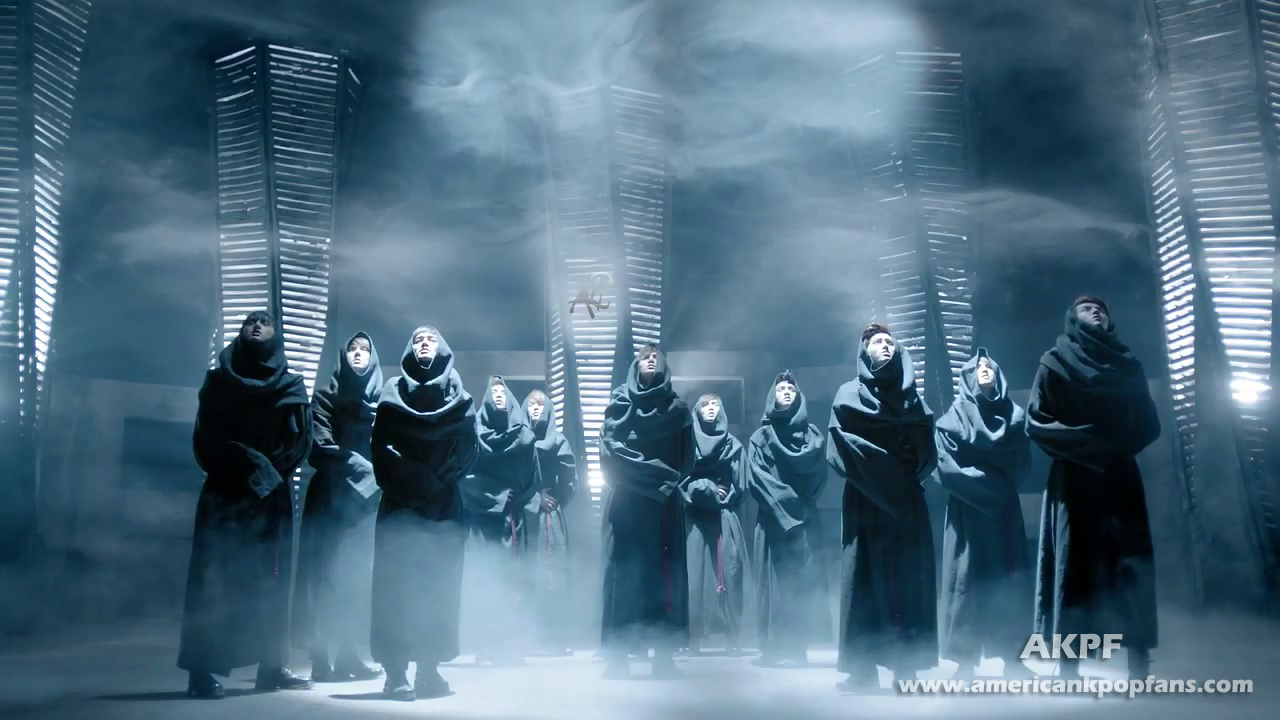 After the story is over (which I advise you skip because it’s boring and tedious to watch), Exo appears… wearing robes. They’re monks, apparently. I’m getting flashbacks to a variety of movies already. Fitting their monk image, they start chanting. The chanting scares me. It’s Gregorian in origin and quite intense: “CARELESS, CARELESS. SHOOT ANONYMOUS, ANONYMOUS. HEARTLESS, MINDLESS. NO ONE, WHO CARE ABOUT ME?”  Then most of the rest of the video happens like this: close-ups, dancing, and random super power scenes. It’s all quite confusing, nothing really correlating with each other. We see Kai zipping around everywhere with his teleportation powers and the others looking sullen as they demonstrate what they can do. Why is he zipping around? What are they all doing? What happened to them being monks? How does this video make sense in any way? 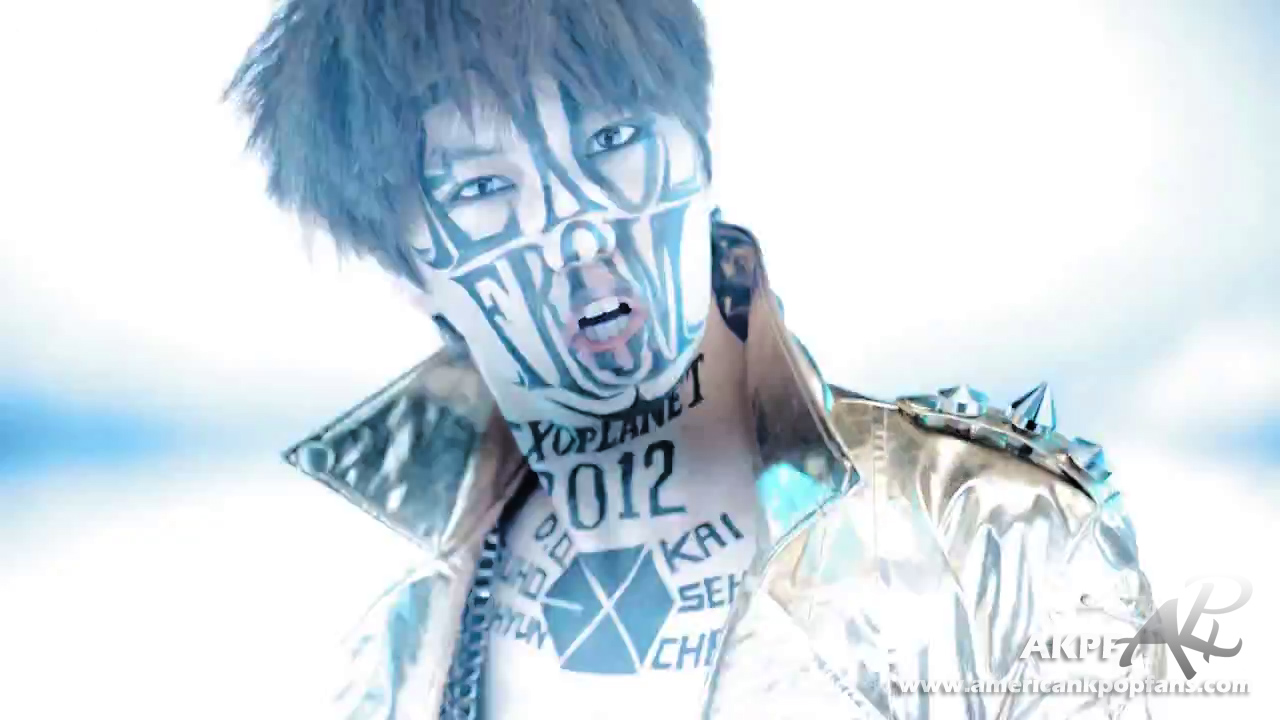 But it gets worse. Overlooking the uncohesive storyline, there are other things that bother me. Such as the unequal line distribution and screen time. You know who stands out to me in this video? Kai. He’s always front and center and he even pops into the others’ scenes. I see a good amount of Suho and Baekhyun but Chanyeol, D.O., and especially Sehun, are sadly neglected. When it comes to lines, Baekhyun, Suho, and D.O. provide most of the vocals while Kai raps more than Chanyeol, the designated rapper. As someone that’s Chanyeol-biased, I’m irritated over this injustice. And then after a quick dance break — lead by Kai, of course — there’s some screamo to enjoy. And by “enjoy,” I mean cringe over. The screamo is so random and off-putting and Kai is frightening as he does it. He has the stupidest tattoos all over his face and chest, “EXO FROM EXO PLANET 2012,” and these horrifyingly hilarious facial expressions. Exo-M make small cameos at the end of the mv.

Exo-M’s version isn’t very different from K’s at all. It has the same basic structure: begins with the backstory, has close-ups, dancing, and super power scenes. But I have just as many, if not more, peeved with Exo-M’s version. First off, why all the Kai? Kai takes up most of the spotlight in K’s version and now M’s version as well? Secondly, Exo-M’s versions suffers the same problems as Exo-K’s: unequal line distribution and screen time. I see lots of Chen and Kris but not nearly enough Lu Han, Lay, and Tao. Heck, Kai appeared more often in this MV than Tao did! Tao got about one or two screen shots of his face and his martial arts scenes and that’s it. And he got very little lines as well. The others also had to deal with an unfair amount of screentime and lines but not so much as Tao. As a weird contrast to K’s version, both Xiu Min and Kris handled the screamo. Kris looked hot as a David Bowie-lookalike with his spidery face-paint but I’m dying inside over what they did to my adorable Xiu Min. 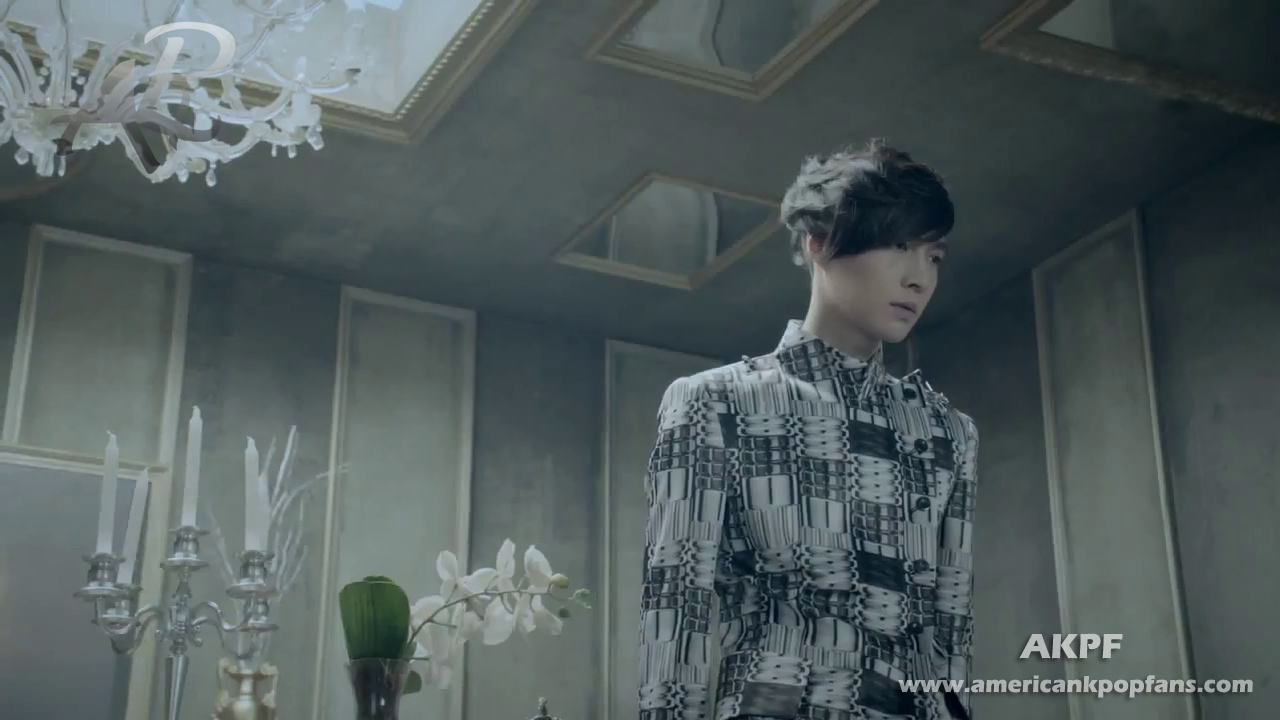 Despite my whining, the MVs weren’t all bad. To be fair, they were beautifully shot. The scenes were all very pretty, my favorites being all those with Chanyeol, Tao, Lay, and Lu Han. Anything with Lay or Lu Han is automatically beautiful by association.Tao’s scenes were extremely pretty, in my opinion. I loved the falling white petals, black background, and vivid red shirt. The super power scenes were also neat but I preferred the face-shots in M’s version to K’s. The styling is as awful as ever, but luckily we get to mostly focus on their faces. I’m not pleased with the arrangement of the scenes — it was all too random for me. Dancing and close-ups I can deal with, but the sudden and unexplained shifts to the boys using their super powers threw me off a bit and made the overall MV inconsistent. One moment the boys are making expressive faces at the camera and the next they’re peacefully, emotionlessly doing magic. 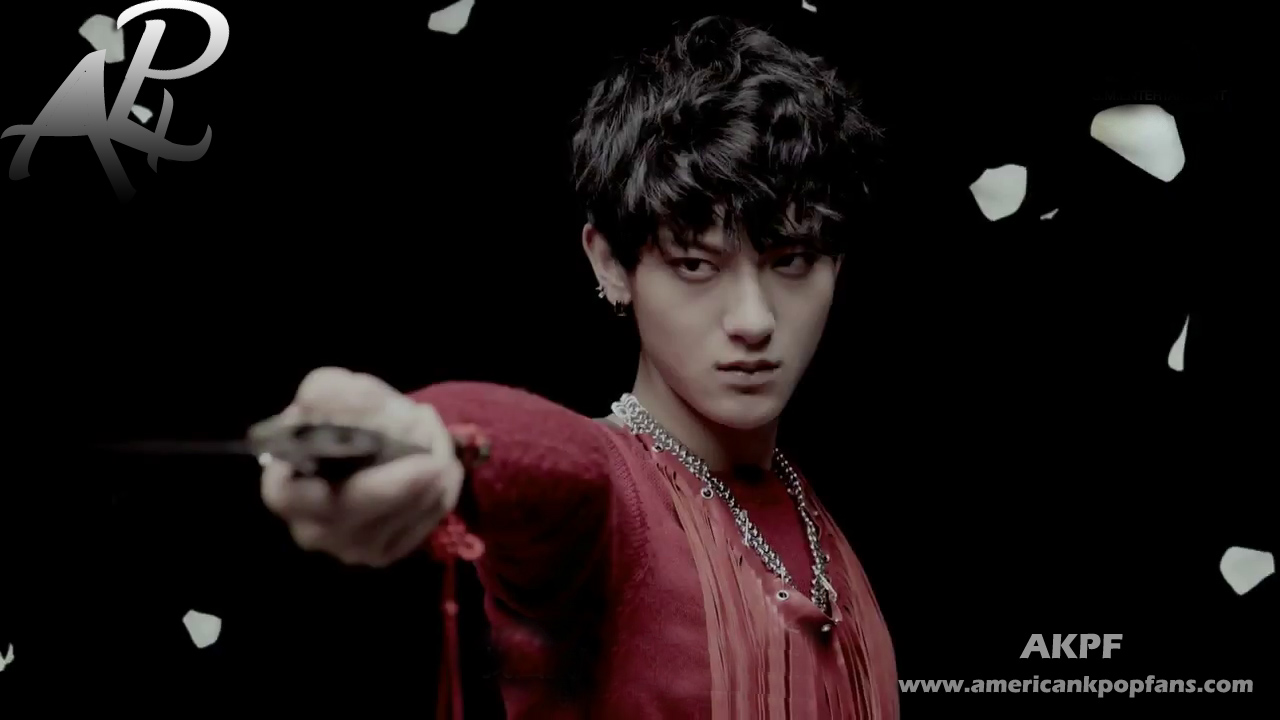 As for the performance aspect of this song — I personally believe that Exo-M delivered it better. Exo-K is fabulous but they lack the fierceness and seriousness Exo-M has. But aside from this, both groups did very well in embodying this song. The emotion was there. It’s a little unfortunate that Chen, the only real powerhouse in Exo-M, has to take care of all the high notes and belting, while in Exo-K, the lines are at least divided between D.O. and Baekhyun. Kris’s rap scene outdid Kai’s greatly, might I add.

For me, these music videos were a disappointment, but I know plenty of others that love them. Who knows — perhaps they’ll grow on me in the same way “Fantastic Baby” did. I do have a list of requests for SM, though:

And then I will be a happy EXOtic.