Welcome to the finale of our Best Stage Outfits series. SHINee’s “Sherlock” outfits is the fourth and last pick for Best Stage Outfits. SHINee? They of the pastel skinny jeans? Yes, SHINee. Because recently, I love how they’ve been looking for “Sherlock.” 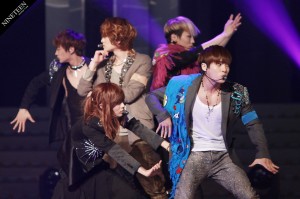 I can’t exactly specify why I like SHINee’s “Sherlock” outfits. They’ve been just as crazy as their old outfits, if not  more so. It might be because they look so good in them. At first I didn’t like the Victorian-60s mashup for “Sherlock,” but soon apprehension grew into appreciation of the interesting combination. SHINee always looks fun and eye-catching onstage, even when they’re wearing ripped pants or atrocious jackets.

SHINee’s stylists love to switch up their look every few performances, but they mainly stick to denim, bedazzled blazers and tight-fitting jeans. By wearing sparkling blazers over destroyed denim jeans, SHINee mixes casual with class, balancing out the weird concept they have for “Sherlock.” For “Sherlock,” SM decided that they’d mix Victorian with a 60s’ hippie look, resulting in SHINee wearing moccasins and fringe in one MV scene and top hats in the next. I like how SM took two wildly different eras and mashed them together, resulting in something that doesn’t really look Victorian or hippie. Some performance outfits were clearly Victorian-inspired, coming in black and grey with buttons on structured jackets. Most were flower-child-urban, as I like to call them, and had slashed denim paired with graphic shirts. But SHINee wouldn’t be SHINee without something weird. Taemin wears half a skirt for one performance and as you can see above, Onew is wearing harem pants…

SHINee is heavy on accessories this time around. They always wear jewelry, typically necklaces, and occasionally they throw scarves over their shoulders. Like that looks good. But I do like the necklaces, which draw wonderful attention to SHINee’s finer features. Taemin nearly always looks precious, especially when his weave is pulled back into a loose ponytail. Key and Jonghyun are generally the ones burdened with the more questionable outfits, but maybe that’s a good thing. Not every man could pull off star-printed denim shorts. 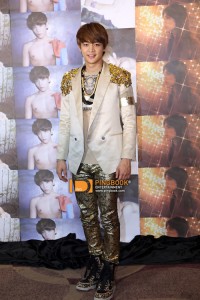 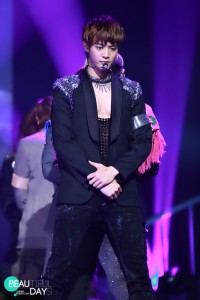 Considering my love for SNSD’s stage performance outfits as well, I must have a thing for embellishments. Love the bedazzled blazers SHINee has been wearing off-and-on. They give the boys a stronger, more mature look than the colorful skinnies they used to don. The metallic pants also don’t phase me–they look great with the rest of the outfit.

That’s the conclusion of my Best Stage Outfits series. Tell me readers, am I insane or are you loving SHINee’s “Sherlock” look, too?

(We Are Shining, Tumblr)