"The Host": A Change of Heart 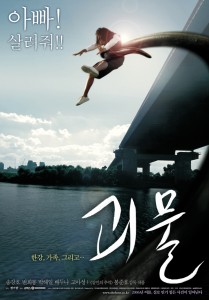 The Host was released in 2006 by acclaimed Korean director Bong Joon-Ho. It’s been highly rated and reviewed, and is the highest grossing Korean movie ever, but I have to say, when I first watched it, I was disappointed.

I’ll completely admit that I got sucked into the hype surrounding the film. I’ve been a fan of Bong Joon-Ho’s other films, especially Memories of Murder, so the fact that he was now making a big budget monster movie caught my interest.

Reviews came through from the Cannes Film Festival (where the movie premiered) and they were all positive. Once the Korean DVD went up for pre-order I was first in line to get my order in, I even sprung for the deluxe 4 disc special edition that came with books and a special case. In my hopes the movie just had to be amazing, nothing could go wrong. I watched the movie when I first got the DVD, and I came away let down. I think the fact is that I went in expecting a “scary” movie, but the movie ended up being too “goofy” in parts, and it didn’t provide many scares at all.

I didn’t hate the movie by any stretch, I didn’t really know what to think about it, so I put the box up on my shelf, and really haven’t touched it since, except to dust it off. I wanted to make it a mission to watch the movie again. A few years have gone by, I now had a better idea of what I was going to be getting into, and also my opinion on cinema itself has evolved in the years. Would I walk away with a stronger opinion of it? Which way would I sway?

I am happy to report that after seeing the movie for the second time, I walked away with a much deeper appreciation for this fun and very deep story.

The Host tells the story of a multi-generational Korean family who run a small convenience on the beach along the Han River. The grandfather, Hee-bong, is a hard worker who runs the shop with his son, Gang-Doo (played by Song Kang-ho) who is basically an unmotivated person, and largely a screw-up. Gang-Doo’s daughter, Hyun-seo, is a bright and caring character, and it appears that this is no thanks to her father’s upbringing. Gang-Doo loves his daughter, but it’s clear he’s out of his element trying to raise her. Hee-bong also has another son, Nam-il (played by Park Hae-il), and a daughter, Nam-joo (played by Bae Doona), who end up getting involved in the story later.

One day a monster ends up coming out of the river, and goes on a rampage,  attacking the beach visitors. In the chaos Gang-Doo’s daughter ends up being taken by the monster and dragged away. Gang-Doo and the rest of the family make it their mission to get Hyun-seo back, but also have to deal with the fear of the potential outbreak of a disease that the monster may be carrying and have infected Gang-Doo with. 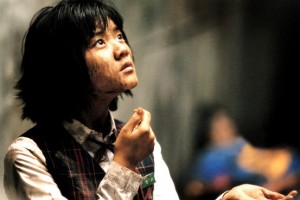 As with any true “classic” monster movie the actual monster and the surrounding events are  usually a metaphor for something deeper, and perhaps something scarier.

In the movie we are presented with an extreme and satirical representation of the relationship between America and South Korea. During the course of the movie, we are introduced to three American characters with substantial roles. The first we are introduced to in the first minutes of the movie as an American doctor instructs his Korean assistant to poor poisonous chemicals down the drain. The Korean assistant objects at first, but then is instructed by the American doctor that he needs to think “wide.”

The Korean assistant then proceeds to pour dozens upon dozens of bottles of this poison down the drain, which in turn end up bringing about the creation of the monster. The next American we meet on the beach during the first attack. The American (who we learn is a soldier) rushes into the midst of trouble without giving much thought, and then drags Gang-Doo along with him (and we see Gang-Doo try to emulate how tough the American is, but doesn’t seem as self assured). The third American is a doctor involved with discussions surrounding the disease that it’s believed that Gang-Doo may be carrying.

I will be honest in stating that I only have a basic understanding of Korean and American relations, and the perception that Koreans have of Americans. For the most part many Americans don’t think much of South Korea, the Korean War is all but forgotten for the most part, and also many don’t even realize that there are still American troops stationed in South Korea, and America has had troops there for many decades now. I also can’t help but remember that in 2006 America was putting pressure on South Korea to reduce the screen quota of Korean films almost by half, which I believe has had an impact on Korean films ever since by reducing some companies to be adventurous with movie funding decisions, and even, for a time, caused Cho Min-Sik (Oldboy) to leave cinema completely.

Was Bong using this film to discuss overall Korean/American relations? Was he using this movie to discuss the screen quota that was going on around this time? What does the monster represent exactly? I’m sure the monster could end up representing a variety of different things. Perhaps it’s the westernization of Korean culture which America forced upon Korea, and even though the people of South Korea tried voicing some disapproval they ended up succumbing in the end. I’m sure you can view it many different ways, and many of them would be correct.

As far as viewing it strictly as a “monster movie”, it works well on that level as well. The movie wastes no time showing us the monster in action, and it looks very creepy. The CGI of the monster was pretty well done considering the budget of a Korean film is much less than an American made blockbuster, however it needs to be noted that the CGI is far from perfect, and ends up looking too “shiny” a lot of the time. I find it easy to overlook something small like some mid-level quality CGI, given the circumstances. The acting is all well done: I can’t think of a single bad performance among the cast.

As should be expected the movie is very well directed and presented. This isn’t Bong’s best work, but it’s extremely well done, and shows that he is a master and clearly capable of stepping outside his usual movie style. The story is very well done, and multi-layered. I feel it’s a movie that could be discussed at length, given the right crowd. At times some horrible things are happening and we may feel like the movie should be taking itself seriously, but then something silly will happen to break the ice, this is something that actually turned me off the last time I watched the movie, but reviewing it again I feel relieving some of tension works to the film’s benefit.

I guess the moral of my whole story is that just because a movie doesn’t strike you at first glance doesn’t always mean that there isn’t more that you can get out of it. With movies like The Host, sometimes it takes a little extra work to dig below the surface and find the real story that the writer and director are trying to convey. I won’t say that The Host is my favorite Korean film, or even in my top 10, but it is a very solid, and very clever film. It’s well worth checking out once, and maybe twice if it didn’t click the first time.