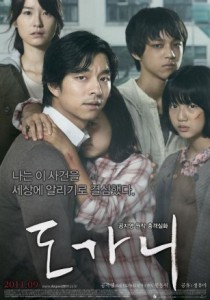 The fabric of our society depends on the bad people being punished and the good rewarded, without which chaos ensues. In 2005 a case involving a large scale system of sexual abuse was discovered at Gwangju Inhwa School, a school for the hearing impaired.  To the surprise of many the perpetrators received a slap on the wrist ruling, ranging from probation to two years of jail time. Proving that things can’t always be swept under the rug the 2011 movie, based on the novel highlighting the crimes that took place, Silenced (or The Crucible) was produced.  In the film a man, Kang In-ho (Gong Yoo), takes up a position as an art teacher and discovers that the students are being bullied and raped on a consistent basis. Seeking assistance, he teams up with a human rights secretary, Seo Ye-jin (Jung Yu-mi), to shed light on the situation.

Acting:
Ever since the days of Coffee Prince I have followed and enjoyed seeing Gong Yoo’s acting progress. For the most part, actors tend to stay in the same genre or character throughout their career. However he has chosen parts of a wide variety, from the smoking hot bachelor to the adorable geek to a man pursuing what he believes is right; setting himself up for a long career. Jung Yu-mi is also someone that I take particular interest in and it stems from my love of the drama Que Sera Sera.  Naturally, these two actors were a huge deciding factor for this movie. If they were in then so was I. To no surprise they delivered (and then some). But it wasn’t just them, in fact the kids’ acting is what really hit home, it was just too believable and at one point I was put to tears by a scream; no images or setup, just one bone chilling scream. With that and the effort of the remaining cast I was able to feel like I was actually peering in on the chain of events and in some ways the screen became reality.

Story:
In most “true story” movies, things are tweaked here and there in order to make it appeal to a wider audience, and if done too much the essence of what really happened is lost. Thankfully this was not the case with Silenced. The internal struggle that Kang In-ho faced brought some depth to the situation. He wasn’t a man relentlessly seeking justice, giving it his all, and never looking back. In truth he had to give things up and although sticking with the children was an obvious choice, it was far from a cakewalk. This personal sacrifice made it difficult for the viewers to go on without wondering if they would do the same.  In addition sufficient detail and characterization of the children was given. Eventually raising the question; how in the hell did (could) these people get away with it? With this the movie went above and beyond in fulfilling its purpose; to educate South Korean citizens of an atrocious crime while sparking an incentive to take action.

Impact:
I have seen many movies and television shows that depict the horror of child abuse, but not once has it riled me up to this extent. I mean, I want to go do something–anything–to help kids in this situation. It makes me want to be a better person, and I am confident that it is the same for the entire audience as well. Leading into one of the more standout things that I loved; while the movie did generate animosity towards the vicious criminals, it gave its viewers empathy and self-awareness rather than a loaded gun of blame. After all, when it came down to it, the criminals got away with it by the fault of the system and lack of support from the people. Thus everyone can be seen as partly responsible, because had the movie not been made the need for change wouldn’t have arisen.

Production:
I am pretty sure that anything with Gong Yoo is guaranteed to be a hit at the box office, but the success of this movie is not dependent on him. It lies within the amazing storytelling, and what better story than the truth. The movie stuck to it and spared no detail (both visually and verbally) with the children’s accounts of what was done to them, making knots in the viewer’s stomach. A risky but necessary move, considering no one wants to be given such explicit imagery. Although I am not really an expert on cinematography in terms of techniques and technical aspects, it was hard not to notice the atmosphere that the lighting and sharpness of the film created, which enhanced the feel and resonance. Quality was obviously taken in high regard and a sense of respect towards the children was apparent.

Silenced had been on my list ever since I heard of it and I was not disappointed, in fact I was blown away. The thing about it is that it goes above entertainment by making a statement that teaches everyone (South Korean or not) that some people need a voice and people to be there for them. Otherwise what happened can occur again. So, if you haven’t seen this I strongly encourage that you do; and if you have go ahead and spread the word, because society needs movies like this to help up us advance as human beings.