Pixie Lott to Collaborate with GD&TOP 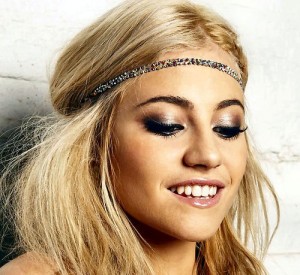 You may have never heard of Pixie Lott — that’s okay, I’ll give you the lowdown. She’s a young British singer, who rose to fame with soulful pop and upbeat dance tracks such as “Mama Do” and “Boys and Girls” from her hugely successful 2009 Turn It Up album, which went double-platinum in the UK.

However her second album Young Foolish Happy has failed to match the critical and commercial success of the former — but she did manage a Number 1 single with “What Do You Take Me For?” Personally I found the song utterly lacking in the charming personality and retro jazz of “Mama Do,” but that’s just me.

Now, Pixie (real name Victoria) has set her sights on Japan, but instead of collaborating with Japanese artists, the singer recently released a statement saying she will be featuring Big Bang’s rappers G-Dragon and TOP on the track “Dancing on My Own.” It was Pixie herself who saw a video of theirs and asked YG if they could collaborate. YG saw this as an opening opportunity to work with an international artist, saying:

“This is only the beginning, from now on, YG artists will continue to work with international artists.”

She wrote on her Facebook that we can hear the track on the 21st of March, and that she is “so so excited for Japan and the rest of Asia to hear it!” It’s great to see such enthusiasm for K-pop from such an unexpected source, and will only propel Big Bang further into the Western market. Pixie has a fair sized following in the UK, even if her place of pop siren has been usurped lately by the likes of Jessie J, Florence and the Machine and Adele. Her voice, which has real vocal strength mixed with a soulful silkiness that works perfectly with big, catchy hooks and belting choruses — if nothing else the distinctive rapping styles of GD and TOP will sound interesting. Pixie has been rather guilty of indulgence without caution on this new album; her duet with Stevie Wonder is best described by Duncan Gillespie of NME:

“… horrible, but still not horrible enough. Rather than righteous ire, you’re left with only a sense of moral and cultural confusion, rather as if you’d caught yourself lusting after an ironing board.”

Is this the same thing? I’m hoping the boys will pull it off, after all the sounds we heard in “Don’t Go Home” could work well with Pixie’s smoky voice.

Of course, it depends of the song, and “Dancing on My Own” is… predictable but not without potential. It’s closer to “Cry Me Out” than “Boys and Girls,” but both TOP and GD can do angst and they can do it well. I didn’t listen and think that it was completely the wrong track, nor could I instantly see why it was picked. I find it rather like the rest of Young Foolish Happy, something without charm or presence but still perfectly easy to listen to providing you’re doing something else at the same time.

The real pity is that, well to put it bluntly, Pixie Lott is almost old news. Ask any one of the 12 to 18 year olds in my school if she is worth much and the majority answer will probably be “Who? Oh yeah, err no. LOL. I haven’t listened to actual lyrics in months, put the dubstep back on.” Her fans aren’t the kind of fans that would usually listen to Big Bang material — I should know, I used to be one of them. As for how VIPs will react to Pixie, I don’t know, but apart from ear-worm choruses there isn’t much in common between Pixie and GD&TOP. Of course, this could simply mean both parties will gain a new fanbase, or it will mean we’ll get lots of comments saying “LOVED GD&TOP, but that stupid girl ruined the song!!” and “Why did Pixie let those Asians mess up her song?” only I doubt the spelling and grammar will be quite as good. 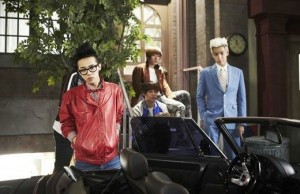 But “What Do You Take Me For” did do very well, and judging by YouTube and similar comments, there is a lot of hype building around the track. After the borderline ridiculous, all-kill takeover of Alive, not to mention the earlier success of the GD&TOP album (which I happily partook in) picking them may have been a smarter choice than I gave Pixie credit for earlier. In fact it’s a win-win situation; Pixie uses the two of them to boost her career while they use her Brit-pop credentials to keep overseas interest piqued.

Being British, I am pretty psyched that any connection is being made between K-pop and the UK, even if it is one forged in Japan. I’ve got a lot of questions about it: Will they rap in English, Korean or Japanese? Will they write their own raps? If it’s popular will there be a PV? Will GD&TOP come to England? Will they come to my house? Will TOP marry me? Y’know, those kinds of questions.

In all seriousness, I am looking forward to the 21st, and I hope Pixie and YG will produce something wonderful. What are your views?