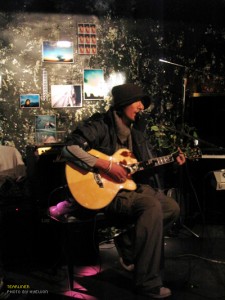 If you’re not into K-indie music you may have never heard of Tearliner, but if you’re a K-drama fan–chances are you’ve heard his music.  Tearliner actually started out as a six member band in January of 2004, but before the release of its first album, the group turned into a duo and then a one man band.  Tearliner, who also just goes by Liner, born Park Sung-hoon, was never classically trained and doesn’t even read sheet music.  His music is influenced by everything he has experienced in life and is classified by some as “Dream Pop,” because his music has a dream-like quality to it.

Tearliner was first signed to Pastel Music which was founded in 2003 and was, at the time, Korea’s leading music house of K-indie artists such as Humming Urban Stereo, Misty Blue, and Casker.  Currently, Liner is signed under Happy Robot records. Tearliner has an immense and impressive discography which you can check out here.   Here’s one of Tearliner’s early hits, “Novaless.”

My first exposure to Tearliner, that I knew of, happened right here on Seoulbeats through an article that I wrote.  The article from back in September of 2010 was about the SungKyunKwan Scandal OST and included my lament over it not containing my favorite bit of background music from one of my favorite scenes.

One of our awesome SB readers, left a comment letting me know that the music was from a song called “Nabillera” by a musician named Tearliner and that he was the Musical Director of the highly popular 2007 K-drama, The 1st Shop of the Coffee Prince. Of course I had to find out more about Tearliner and learned that he had first worked with the Coffee Prince PD Lee Yoon-jung on the k-drama Taerung National Village which led to him being the Musical Director of the Coffee Prince.  Many consider the OST from the Coffee Prince to be the best K-drama OST ever made.  The music from the drama was so popular that in addition to the original OST release that included 16 tracks, a second OST was released that consisted of 2 CDs and 33 completely different songs.  Here’s one of Tearliner’s own songs on the OST “Ocean Travel.”

Other than his own works, Tearliner included the music of several other K-indie bands on the Coffee Prince OST like Humming Urban Stereo. The Melody, Casker, Misty Blue, Belle Epoque, and Donawhale.  Due to his skillful use of music within the drama, fans of the drama also fell in love with its music.  There was a noticeable surge in interest and popularity of K-indie music after the run of the Coffee Prince which many attribute to Tearliner.  He has also worked on the music for the K-dramas Romantic Island and Triple.

Here’s a couple of my favorites of Tearliner’s works.

Tearliner also performs in the duo Low-End Project with former Tearliner lead guitarist Kang Ji-hoon and in the trio Heroin Underground, again with Kang Ji-hoon and The Hi-lights’ bassist Jaguar.  When asked to describe his music, Tearliner has said,

Music is like an oil painting on a canvas. Rhythm is the sea with smooth waves, instruments fill the air with a softening atmosphere, and melody is a ballerina dancing beautifully on the sea.

Hope you’ve enjoyed being introduced to Tearliner and his music.