Is Height An Important Factor in K-pop?

While doing a quick search of the big K-pop stories of the last 48 hours, I kept coming across titles like “True Girl Group Height Revealed”, “SNSD and KARA Super Short!” “Girl Group Height Ranking, Shocking Results!” I couldn’t help but think these results are unlikely to be that shocking; we are being constantly told who has the longest legs and best bodies, so height didn’t seem like a big issue.

However, the saying does go curiosity got the cat an article (or something) so I had a quick look, and I was rather surprised by the results. Idols’ height have been a running joke since I first started watching interviews and variety programmes, but I never really listened to who was shorter than who. The most “popular” and celebrated groups seemed grouped together at the Very Short and Short end of the chart, while perhaps less successful idols have been blessed with the  gift of vertical superiority. 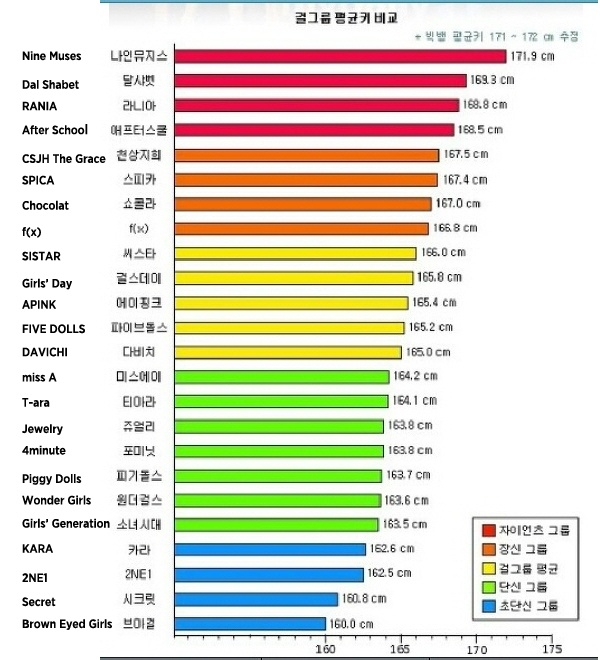 As you can see, Wonder Girls, 2NE1, KARA and the like are rather short, although considering in 2010 the average 19 year old South Korean girl measured about 161cm, most groups are just tall.

This surprised me, mainly because Korean fashion dictates beauty is tall and willowy. And it’s not just Korea; all over the world height is extremely important if you want to be considered truly beautiful. Nine Muses don’t even make the minimum height requirement for the British Association of Model Agents (173cm). I was surprised because in my opinion Brown Eyed Girls and Secret are nothing but beauties, and therefore must be tall. Seems it’s not the case — it’s more like pint-sized perfection.

But Antonia, you say, don’t forget that the average Korean height is short when you take the rest of the world into consideration, so comparing them to British models doesn’t work. Well hypothetical reader, that’s a valid point as always, but what I’m trying to say is that maybe talent plays a bigger role then we realise. While idols like Sunny, Kikwang, Jonghyun and JeA might be small compared to their bandmates, nobody can say they aren’t pretty talented in their respective areas. (Actually, Yoseob, Jonghyun, Taeyang, Ryeowook…I sense a pattern.) Anti-fans will call 4Minute and SNSD little better than glorified models with autotune. But perhaps this new information will quiet those voices.

Or perhaps not. After all, let us not forget 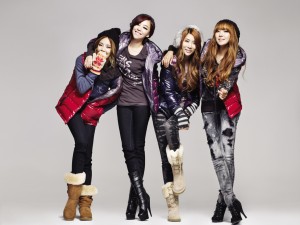 that most useful yet dishonest technique – Photoshop. With a few clicks the diminutive members of Brown Eyed Girls will take on the stature of Rania. In fact a few well-placed props and some clever lighting means they will look tall anyway.

And what does it matter in the end? I could take this as a sign that opinions are changing, and fans are realising their idols’ otherworldly beauty isn’t as unattainable as they might think. But really I doubt it will make much difference. Some have been calling it another step in bringing these girls quite literally closer to earth; however, that feels like wishful thinking.

Maybe my interest comes from growing up in a society that favours height; shorter girls have to be breathtakingly stunning if they want to be any more then “pretty”, while taller girls only need don a little lipstick and a body-con skirt to be labelled sexy. But I’m willing to conclude this is little more than a fun factsheet for fans.

However, the amount of buzz it’s generated could mean I’m alone in thinking that, so what are your views? Do you feel better knowing your idols aren’t as perfect as you thought, or is this all just pointless?