k out the Sherlock tag on Tumblr, the usual romantic Sherlock/John gifsets have been buried under shirtless Taemins and excessive capslock abuse.

But, be it brave or foolish, BtoB dropped their first trailer on the 14th and have since released another one on the 19th. The second teaser also gave us a brief glimpse of their debut song “Insane” and revealed the members faces to us. And, oh, they are a good-looking bunch aren’t they? Staking my claim on Minhyuk, Ilhoon and possibly Peniel D, whose name I won’t make fun of. I can’t say I was too impressed by the 2nd teaser, the outstretched hands, the lighting, the pianos – they all reminded me of Beast’s “Fiction” so much that when the MV came out I was barely excited. “Fiction” is one of the most emotive and complicated songs from Cube, if not from Kpop recently, but if I want to listen to “Fiction” then I’ll listen to “Fiction”, not a rookie rehash.

Still, they deserved a fair chance; and so I watched Insane with an open mind, fingers crossed BtoB would deliver.

The MV starts, as so many, many MVs seem to do, with lingering shots of inanimate objects–this time some beautifully distressed pianos–and a

beautiful girl looking.  The girl in question is A Pink’s Chorong, who looked very pretty and completely nondescript–no points for fashion originality there, Cube. I hope someone filled out a risk assessment form for that roof she was standing on. We got a quick flash of the boys sitting in a disused ballroom, the word insane, and then the strings and piano gave way to the song.

Sadly, the old dancing-in-a-box cliché is seen here, even if Cube has tried to disguise it by filling the box with lots of smaller boxes. However, the lighting was still prett

y good, and the boys didn’t spend all their time there, so it’s okay. I cannot decide if I like their blue and black outfits, they are reminiscent of straitjackets which worked well with the theme, but I preferred the combat style clothes they wore throughout the rest of the MV. There were several shots of the individuals in front of old books, burning pianos and static TV, interspersed with Chorong looking lifeless. I know what might sound cruel, but compared to the intensity of Minhyuk’s and Ilhoon’s acting she just didn’t emote at all. Especially when she picked up that piano key; I mean, clearly this was important in the fairy-tale Room of Requirement world she lives in, but no facial expression change at all.

Things picked up when he threw a chair at a mirror and Eunkwang hit his high notes, the boy has some serious potential. He also looks a lot

like the love child of MBLAQ’s Joon and Sunny Hill’s Kota, which was confusing but no necessarily a bad thing.  She slotted the key back into its rightful place, the camera panned in on her face and one perfect tear, then Minhyuk’s anguish. I think it was showing how their relationship is unfixable, or her way of saying goodbye. The last image we see of her is on a roof, but I don’t think she is going to jump, more that she is unattainable.

Having watched the whole thing several times I still feel a sense of disappointment. Neither the song nor the video has moved me particularly, and they certainly aren’t giving us anything new. But at the same time I feel this is a group that will only go from strength to strength. 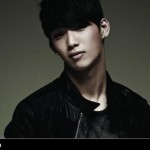 As I said, the lighting was very good, it didn’t wash the boys out and fitted with the mood of the song. The shots were mainly clean and I liked a lot of the framing, particularly the shots of Chorong and Ilhoon on the roof through the door and the mirror parts.. I could have done with less in and out of focus parts and quite frankly there is only so long I can take of lovingly shot pianos and words and chairs.

It would have taken a lot to beat the first teaser’s dancing, but they did well anyway. It was slick and professional, working well with the timing of the song. However I felt it lacked a hook or a climax, something to make it truly memorable. All the sitting around in the ballroom just felt like a waste of time to be honest, I would rather they were a little more proactive.

I have already expressed my dislike of Chorong’s acting, but I don’t want her to bring down the boys’ performances. All of them managed 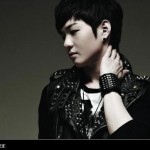 sincere looking expressions without becoming over-angsty. There wasn’t much of a storyline, and I think that’s a pity because Cube is good at storylines. See “Beautiful” for an example – I think the concept of being driven to insanity by love could have been interesting. Of course if they pushed it too far they would be in danger of being insensitive, but if they really wanted to change the world of K-pop it would have been a better start. Still, it was an enjoyable MV with some interesting moments, and I can only hope Cube becomes more confident in their concepts.

Overall, it wasn’t a disaster or a triumph. I was pleased with it, the song gets catchier everything I hear it, and a few of those faces are already messing up my bias list. I hope “Imagine” will show us another level of the boys skills, what are your thoughts?