Hit Me with Your Best Shot

As we all know, K-pop is very trendy. It’ll grab onto something, beat it to death, and repeat the process with something else. Worse, many groups tend to do this at the same time. Like the current, absurd popularity of teasers and overabundant promotions. Just in case you didn’t catch it the first twenty or so times, Exo Planet’s Kai can dance. If you weren’t already aware, Big Bang is back, and they’ll remind you of this over and over again with multiple interviews, music videos, and photo shoots — and they haven’t even begun promoting yet. True, not every group is promotion-happy but it’s happening often enough that it’s noticeable. Extremely noticeable. You know what else is noticeable? The recent usage of martial arts in concepts. 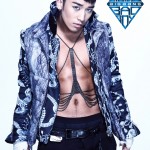 Using martial arts or anything martial arts-related as a theme is not incredibly original at all, especially in Asia, where martial arts — be it taekwondo or karate or kung fu — is part of the culture. You’ll see it again and again, in movies, TV shows, anime and video games. It’s probably been used before in K-pop past. But in recent months, martial arts has been appearing again and again in concepts and choreography. As someone that loves watching people perform a strategic series of moves with grace, dexterity, and lethality, I can only say that this pleases me.

Rapper queen Tasha released a music video for her song “Get It In” last year, in which she swings around a sword like a badass samurai. Tasha’s fierceness has already been discussed before and we’re all already aware that she’s an absolute queen and her marriage with Tiger JK is one of the cutest I’ve ever seen, so enough of that. When this music video came out in late October 2011, it stood alone, by itself, as a martial arts-themed music video. Nothing conspicuous as of yet, just Tasha looking like a BAMF. There was nothing hinting as to a trend being started.

But along came Exo. Let me get this out of the way: I love Tao. Yes, I know Exo hasn’t debuted they, and that they’ve only managed to vomit a disgusting amount of teasers (90% of which feature the one and only Kai), some “prologues,” and viciously tease us with amazing-sounding songs. When I first heard about Tao, I was highly skeptical. What was SM doing hiring a martial artist? Because Tao is a legitimate martial artist. He’s trained in wushu and has allegedly  placed 3rd in an international competition and 1st in a different competition. He’s apparently won other awards for rapping and dancing as well. But SM has only really been promoting him as a martial artist, not as a dancer, singer, or even his assigned role as rapper. Leading us all to wonder why a martial artist would belong in an idol group. We can only conclude that it’s because wushu is cool and Tao is hot and those factors combined make him interesting and even more hot while also making Exo look cutting-edge.

Exo hasn’t been the only group using martial arts to their advantage. Not too long ago, MBLAQ released a practice video for “Run.” Obviously ninja-inspired, the choreography reaches a whole new level of awesome as the boys glide, flip, and twist across the floor. Everything is very detailed and strategic, from the fight with sticks to the background dancers being used to create shadow clones during the chorus. I love this choreography and I’ve literally watched this video more times than I remember.

The most recent example would be NU’EST’s second teaser, featuring Baekho wearing clothing that looks far more Japanese than Korean and movements that remind me of samurais and kendo more than anything else. Not that any of this matters, it’s just that NU’EST has been continuously reminding me of a J-pop group more than a K-pop group. It’s something about their look. But I digress. To be honest, I’m not really excited for NU’EST’s debut. This teaser was pretty cool, having him swing a sword to dubstep. Like Tao’s teasers, it doesn’t do anything to show his skills as a dancer, singer, or rapper, but we at least got a taste of what his group will sound like.

Whether or not martial arts will continue to be a consistent theme in K-pop is anyone’s guess. With Tao around, it very well may. Until it becomes overused and abused, I don’t see why it should disappear. Martial arts add a cool, badass factor to concepts and choreography while also adding a little cultural intrigue. I’ve yet to see a martial arts-influenced concept or choreography that isn’t entertaining in some way. As long as this trend stays limited to a few groups and teasers, I’m fine with it.

What do you think of martial arts being used in concepts? Who would win in a fight: Tasha, Tao, MBLAQ, or Baek-ho?