There are many things I love about K-pop, but the number one thing would have to be the dances. As  a person who tends to recall things through visial cues, and someone who loves to dance (albeit very badly), choreography speaks to me in a way that is unique and not unlike the way music speaks to other people. In fact, the power of dance is seen very clearly in the international K-pop community—it’s hard to sing along to a song in a language you only vaguely understand, but you can always do a dance cover for that song; no Korean skills needed for that. 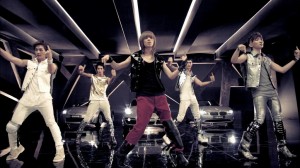 I’m sure everyone’s attempted at least one dance: for me, it was SHINee‘s “Lucifer“– definitely NOT a good routine to pick on your first try at this. But I had it bad for this dance; utterly enthralled by all the tutting, hip-thrusting, handcuff-imitating, and just general aggresiveness of this routine. I immediately looked up various dance cover videos in an attempt to teach myself the dance, and even found this awesome one of four guys and a girl (who was wearing the most psychedelic striped top I have ever seen recorded) dance so well, even though the girl seemed to make a couple of mistakes. But she was so charismatic and your eyes were just pulled to her, this girl in the middle. And then I found out that that girl was Taemin. Look, I had only been in the K-pop fandom for less than a week, OK?

Throughout my journey in K-pop, some dances have stuck with me more than others, and I would like to share some of them with you. Please note that this list is entirely my own, is in no particular order, and is 100% subjective. It is also a list of my favourite dances, not necessarily the best. So, shall we dance?

“Somebody to Love” – Big Bang

This isn’t so much a proper dance, but I love the human mic stands (as I’ve mentioned before), and I really do enjoy choreography that puts the song and vocals first. Watching this almost make me want to start taking singing (and Korean) lessons just so I could cover this. You think Taeyang could teach me?

This is the first ever dance I managed to completely master, and I still enjoy dancing to it. This is a fun lighthearted–oh who am I kidding, it’s completely ridiculous–dance along the lines of “Gee,” but it’s not too girly (especially if you learn the guys’ part–I stuck with the ladies), a lot more fun than their debut track “Too Late,” and I think it’s a fairly good choice for beginners who want a bit of a challenge. I hope they make a comeback, soon. I kinda miss them together.

This is where I learned how to dougie. It’s also one of the handful of songs to which I know the full routine. A lot of the appeal of this dance for me are the moves which I haven’t really seen other girl groups do in an accessible manner. With 2NE1, getting down on the floor, bending over backwards and fanning myself vigourously with my hands doesn’t feel (too) odd.

This is by far the best dance from SuJu, hands down. They make good use of their many members here to form segments of people performing different moves to the same music. It’s quite a nice effect, and I love that scooby stack move they do at the beginning behind Hangeng. Also, Eunhyuk‘s chest-pops. That is all.

While I love “Breathe” and “Bad Girl, Good  Girl,” this has got to be my favourite; this is the dance that got me into miss A, after all. It was classier than their previous dances, but still retained that fierceness that makes miss A, miss A. But considering that there is no chance in hell of me being able to successfully pull off some of those moves, I’m just content to watch them. Maybe if I watch enough times, I’ll end up absorbing everything and thus become able to ace the choreography, right?

This dance is actually very easy to do: just fashion your hands into a gun, point it at random things, shoot; lather, rinse, repeat. And if you can find some minions, you can go all Pupeteer-Zelo too. But there really are some great moves in this MV, like when they pose on one leg before dropping to the ground, and the overall effect of the dance isn’t so much as to impress us with complex choreography as it is to embody and enhance the overall aggressive and intense tone of the song, and it’s executed well, too.

This here be the guilty pleasure entry to this list.  This entry was meant to be for “Keep Your Head Down”, but as cringeworthy it is to watch Yunho and Changmin grab their crotches repeatedly, the dance is now so ubiquituous that the move has taken on a lol-tastic quality, providing hours of unintentional enjoyment for everyone. Other than that though, the dance is pretty good if you focus on all the different little moves the backup dancers do while the duo are singing. But as far as dance covers go, I think I’ll sit this one out.

“Into The New World” – SNSD

There was this massive showdown going on inside my head over this and “Genie.” While I still hate the high-kick-to-camera-while-wearing-miniskirts move, what ultimately settled the matter was the fact that Hyoyeon actually had a proper dance break compared to the travesty in”Genie” (though that was better than the” Mr. Taxi” one). And the girls look much more lively here too–I wish they’d kept some of that energy; they do tend to look a bit robotic on stage nowadays.

I love a good shuffle, and this, is a good shuffle. It was unexpected to set this type of dance to this type of music (the shuffle has tradionally been rave-fare, and more associated with techno than pop), but it worked out well for T-ara.  They look like they’re having fun, which is only natural because this choreography is fun too, if a bit demanding on the legs. While there wasn’t much variation in the dance moves, I feel like the fewer number of moves actually worked in T-ara’s favour, seeing as the actual steps themselves may take some effort to master; having complicated choreography on top of that would have been overkill. And I love that the members are wearing much more comfortable footwear than they usually do for performances–in fact, wasn’t “Into The New World” performed in sneakers, too? Hmm…

I’ve already waxed lyrical about this dance, but there is no way I can overlook it here. Neither can my family, because I’ve been running around the house like SHINee all week, singing about how curious I am. I love Rino, I do, but this choreography is just really awesome. It’s the perfect mix of cool, intricate and silly–just the way I like my dances. Now all I have to do is get through the whole thing without getting too dizzy. I don’t know how Taemin does it…

And that’s my list. I have more favourite dances, but I can still feel that there are so many dances out there that I haven’t yet experienced, and I honestly can’t wait to find them. And so, I ask you, Seoulbeats’ readers: what are your favourite dances? What qualities in a dance make you favour them over others? Leave your comments below!