Being a Warrior (I still refuse to accept Baby as the fanclub name), I’m delighted by the apparent growing popularity and prominence of B.A.P. It feels like I’m seeing them everywhere and I love it. My bias rookie group is having new interviews and photo shoots practically every week. Their latest photo shoot and interview was with Elle Girl. The concept of their photo shoot has been described as being like “European princes,” which, as you can see, isn’t very accurate. The boys, as lovely as they are, do not look “European” or “princely” in anyway, but let’s enjoy the eye-candy anyway. 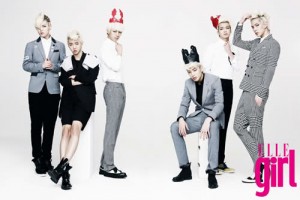 So. Much. Flawless. I can’t even… ok, not entirely. The boys look absolutely smashing in suits — as shown during their “Secret Love” promotions, but the odd choice of accessories is detracting from their godliness. Jong-up, Dae-hyun, and Young-jae all wear these strange headpieces that look like lobster claws. If the rest of the picture didn’t look so serious, the crowns would’ve been a fun touch, but against the grey, they’re quite distracting. Another bizarre thing is Yong-guk’s incredibly skinny calves, revealed by his shorts. Of all the members, Yong-guk is the last I’d expect to see having Yoona-sized hairless legs and wearing shorts. He looks much younger in this photo, and I’m curious to know what those white things are on his shoulders. 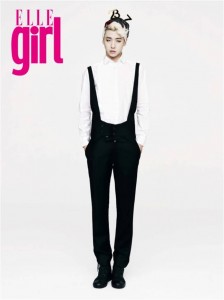 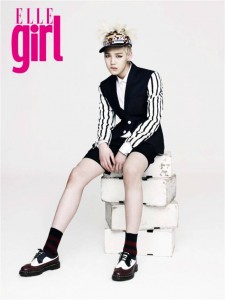 Luckily, Yong-guk’s solo picture somewhat makes up for his dreadful styling in the group pic. Dressed in black pants, suspenders, and a crisp white shirt,  Yong-guk looks classy, manly, and basically what every girl dreams about (imagine his voice reciting this article in your head.) But then, there’s his headwear, reading “B 7.” Pretend it’s not there. Focus on everything below the bleach-blond coif. In the picture next to Bang is the always adorable Zelo, who also wears a strange hat. Are those bits of fur his hair or part of the hat? His outfit, I’m sad to say, makes him look like an oversized child. 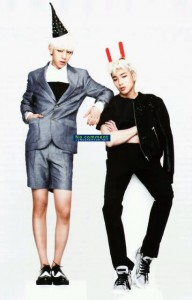 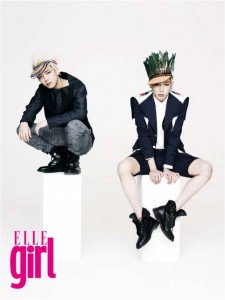 Dae-hyun also wears shorts in his and Jong-up’s picture. He, like Zelo and Yong-guk, has long, hairless, smooth, slender legs that make you pause to wonder if it’s fair for a boy to have legs like that. His outfit is a little strange and the fit of his clothing is a little strange as well. Perhaps it’s because of  how he’s positioned, but that blazer is oddly stretched across his body. Underneath the steal-grey satiny blazer is a regular-looking T-shirt and on top his head is a studded black party hat. Dae-hyun also looks a bit like an overgrown child to me. Next to him is Jong-up, whose otherwise manly and intimidating pose is thrown off by the comical red rods protruding from his head. Jong-up is dressed very casually in all black, wearing sneakers instead of brogues, and his torso looks oddly misshapen in a way that hints at Photoshop. Young-jae and Himchan’s outfits in the last picture aren’t much better. The boys look hot — definitely born to model — and feral as they stare us down. Their smoldering almost makes you forget the odd things they’re wearing. Himchan is also dressed in an undersized suit with shorts, revealing long milky legs, undone boots, and a feathered hat. Definitely not the most conventional look by any means. As for Young-jae, aside from his fried hair and questionable headband, he doesn’t look too bad at all. His black boots, skinny jeans, and shirt go together much better than the other outfits.

This photo shoot and interview did two things for me: it rejuvenated my love for B.A.P. (I’ve been spending too much time with Exo-M lately) and it also revived my desire for new haircuts for B.A.P. The boys, as flawless as they are, are killing their hair with all that bleach and it’s starting to show. I hope they’re doing regular deep conditioning treatments and using shampoo for colored hair, otherwise they’ll have to resort to cutting it all off pretty soon. I do not want buzz-cut B.A.P. I want brunette B.A.P., and for Yong-guk to go back to having red hair. Yum. If you’re interested, you can read their interview with Elle Girl here!

What do you think of this photo shoot? Do you like B.A.P as “European princes?”