When it Comes to Cover Girls, Three's Company

To celebrate their 1oth Anniversary in the month of March, Vogue Girl chose three lovely ladies to each have their own cover shoot for the special issue. This occasion also marks the first time a Korean celebrity has graced the cover of the and the stars chosen for this honor were actresses Shin Se Kyung and Lee Yeon Hee, as well as SNSD member Yoona. Each cover girl’s pictorial had a different feel from the others and the young beauties were styled in some of the latest Spring fashions from designers brands Prada, Miu Miu, Fendi and Burberry Prorsum. Let’s take a look at Vogue Girl’s leading ladies! 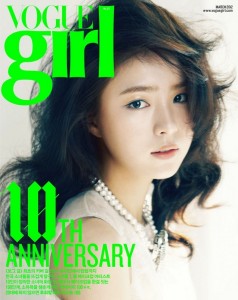 Shin Se Kyung is currently filming for the upcoming drama Fashion King, so it seems fitting for her to be involved in a high-fashion spread for the teen market’s version of the fashion glossy. The actress is always versatile when it comes to modeling, and this time she takes a more sophisticated turn in organza, lace and pearls. The cover shot (as well as the above photo) features a cellophane organza dress from Marc Jacobs and a double-strand pearl necklace with Swarovski-encrusted bow from Miu Miu. Another shot shows her in a look straight from the Prada runway, all the way down to the resin rose and crystal drop earrings.  The earrings as well as the silk top and leather skirt are from the fashion house’s 2012 S/S collection.  The look is a little bit of pleat overkill and the hairstyle is something of a housewife’s take on the Snooki bump which doesn’t make for a good combination.  Miu Miu and Prada are paired up for the next two shots; the nude lace jacket, floral crop top and lace skirt are all from former while the latter’s rose resin and crystal jewelry can be seen in the form of earrings, a necklace and bracelet. 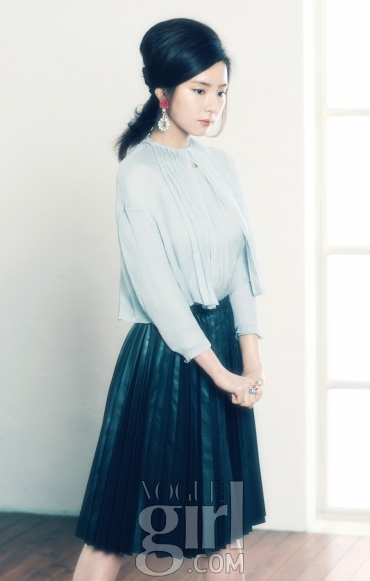 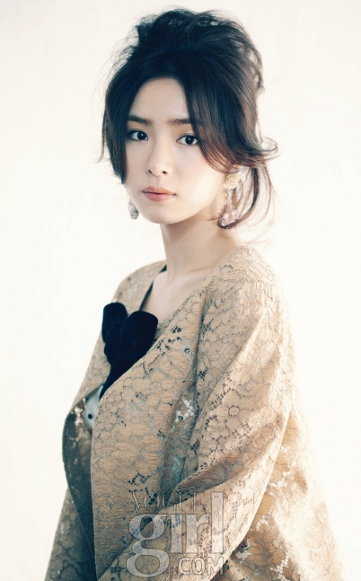 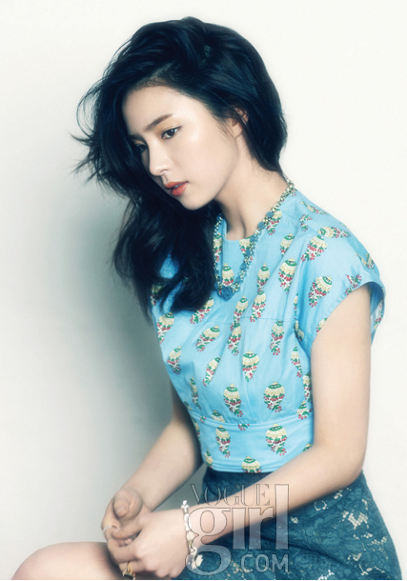 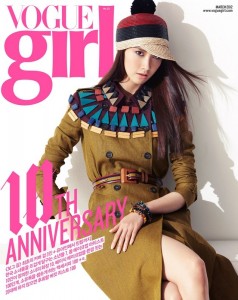 The second cover girl, Yoona, is also preparing for her acting return in Love Rain, a drama that has already received praise for it’s vintage fashion for the cross-generational story line.  The singer can be seen in another classic form of fashion for this shoot, Burberry Prorsum. Since she recently wowed fans while attending the London Fashion Week show for this label’s 2012 F/W collection with group mates Seohyun and Tiffany, it is nice to see her in more of their pieces. Wooden beading and rafia were huge elements of the 2012 S/S collection and Yoona’s cover shot showcases both. The green trench with geometric beading is accessorized with a striped rafia pom-pom hat, belt and a variety of beaded bracelets.  Another shot shows her in an olive green parka with natural rafia-trimmed hood and woven striped skirt; the same belt and bracelets are seen once again. A much simpler look for Yoona was the cropped linen jacket and pleat front skirt in deep jewel tones that was combined with a perfectly matched pair of rafia wedges and the ever-present pom-pom hat. Of course a Burberry spread would not be complete without a take on the iconic tan trench.  Yoona looks like a modern–and female–Sherlock Holmes in hers. The woven belt and open-toed wedges are perfect companion pieces for this look, and we’ll just pretend that her hat doesn’t have a pom-pom this time; please pay no attention to the shadow. 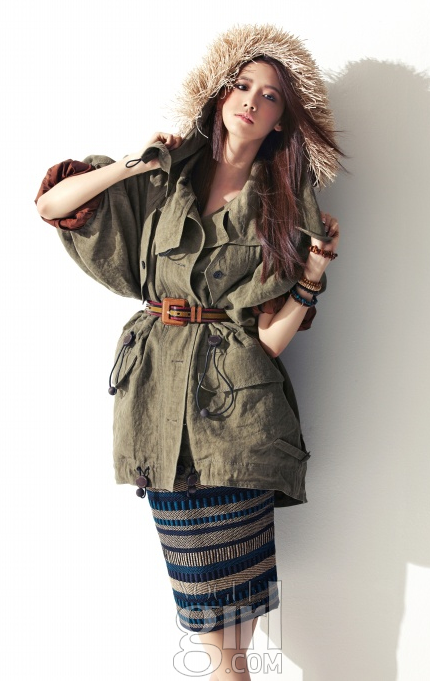 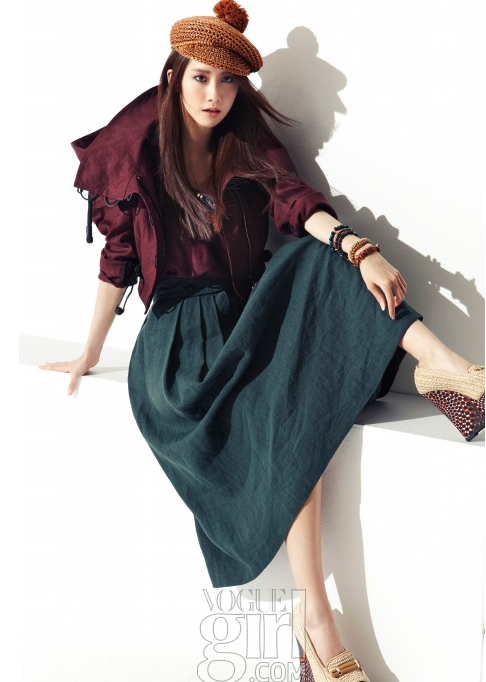 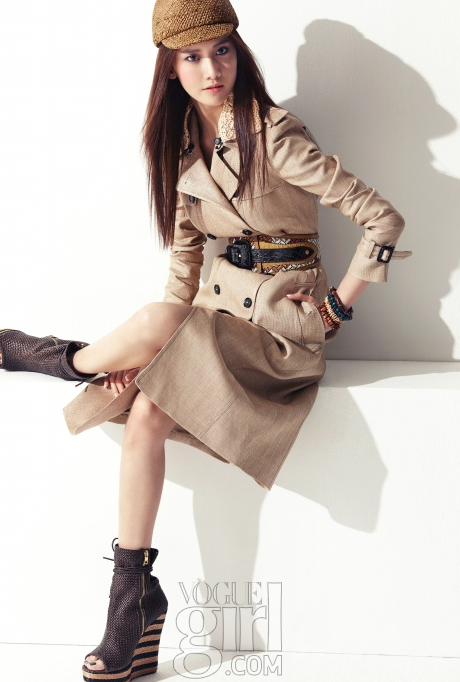 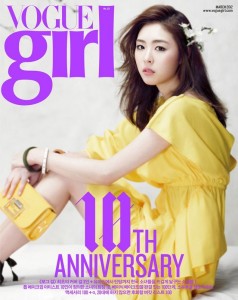 Rounding out the trio is Lee Yeon Hee, and while the SM actress doesn’t have a project in the works that we know about, she has been popping up a lot lately. Her shoot is chock full of items from Fendi, and often times puts a special focus on the handbags she holds.  The cover shot shows Lee Yeon Hee in a sunny yellow asymmetrical dress from the 2012 Resort collection, as well as an impeccably matched logo clutch. The next shot features another Resort dress, this time a white lattice dress, as well as another clutch–in pink. One of the most interesting looks from her pictorial was a vertical striped dress from the S/S collection that was shown with a wedged pair of espadrilles and mosaic bag. More lattice detailing can be seen in her next look, but this time she carries a white shopper tote.  The enamel bangles seen throughout are also from Fendi. While the ensembles were nicely styled, the deceptively bright lead-in from the cover led to rather boring spread with an overall lack of color that was the least appealing of the bunch. 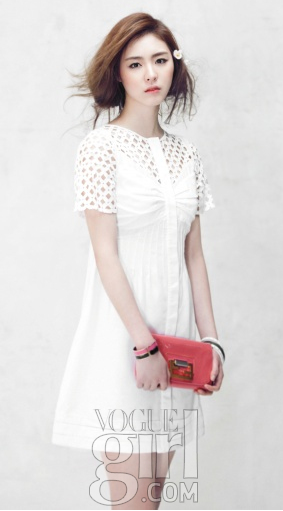 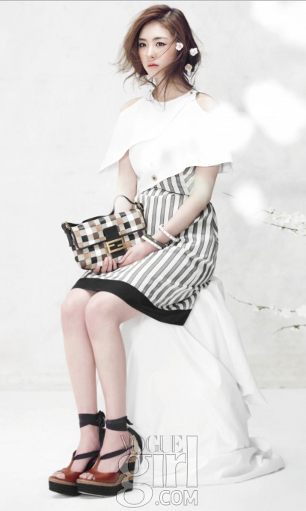 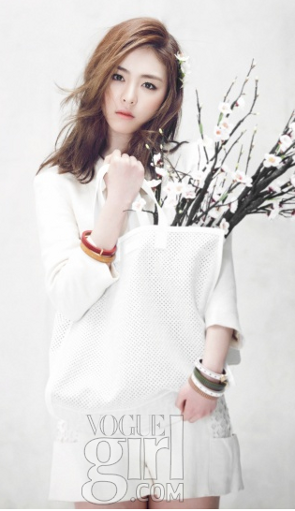 In your opinion, who takes the birthday cake for this month’s group of Vogue Girl cover models?