On the Front Line of the Forgotten War 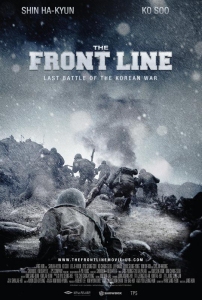 In America, we’re not all that used to films about the Korean War. There were some films in the 50s and 60s, like The Bridges at Toko-ri and The Steel Helmet, and of course M*A*S*H as both a film and a long-running television show in the 70s and 80s, but for some reason it never hooked on with the Hollywood machine in the same way that World War II or Vietnam did. For some families, like mine, the Korean War is the only war that was fought in by relatives, so a gap exists between the horror stories you got to hear after a few too many sips of Jameson, and the movies you got to watch late at night with the sound down low.

Naturally, what we lack in focus on the Korean War is more than made up for by South Korea’s own film industry, and these films seem more relevant than ever because of the tensions since Kim Jong-il’s death. Though the recent shoving match seems to be over Yeonpyeong Island, towards the end of the Korean War, it was all about hills and borders: who got what and where when the cease fire was signed. As we see in director Jang Hoon’s new film The Front Line, everything seems to ride on the claim of a small, strategic hill on the front called Aerok Hill, one that changes hands between North and South so frequently that the generals at the negotiation table can’t even keep track of it.

When mail from a North Korean soldier to his family in the South is found, Kang (Shin Ha-kyun), a counterintelligence officer in trouble for badmouthing Japanese loyalists in the South’s high command, is sent to the front undercover to discover if there is a mole in the unit or not. What he finds is a unit in disarray, one being led by junior officers (like his friend Soo-hyeok (Ko Soo)) because of the high kill rate in the dangerous region, filled with the usual war film suspects that cover all of the emotional bases who have bonded tightly over the course of the war, sharing stories and songs and life and death moments. The problem is that there isn’t anything terribly original here. It’s a complaint that isn’t specific to this film, and of course it’s a story that’s 60 years old now, but The Front Line suffers some because of it. 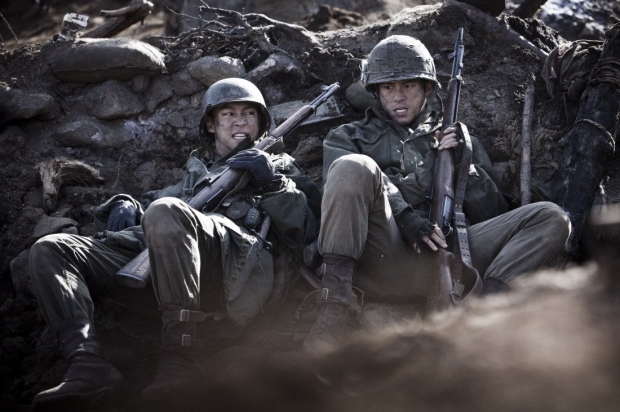 Maybe that’s because there isn’t anything original left in war to cover. No matter the war, it’s all the same themes, the same actions, the same conclusions. It’s the nature of life. Go there, do this, he’s gonna die, so is he, so are you. Maybe there have just been too many war films in general, especially by those who have never experienced war (which I also have not). But The Front Line seems to be assembled almost entirely from bits and pieces of other war movies: a little bit of Saving Private Ryan, some Full Metal Jacket, a dash of Jouex Noel, a pinch of Taegukgi. They’re all in there, and even a dollop of Braveheart, in the way the two sides meet on the battlefield, shooting and hacking away at each other until the camera lens is streaked with spilled blood. In Pork Chop Hill, too, there is a hill that needs to be captured and defended, though it is a real hill, based on a real battle, while in The Front Line, it is a fictional, symbolic hill called Aerok being battled over as the cease fire is being negotiated. Look at “Aerok” in a mirror and you’ll see its “Korea” being fought over in a backwards way, a rather blunt little easter egg that one would hope has lost some of its subtlety in translation.

Still, it gets you. Or it got me anyway, with its brotherhood, its jokes, its desperation, its juxtaposition of humanity with inhumanity and sparing dips into melodrama. Even if it is something of a rehash, it all still works because of the load carried by the actors in smaller roles who pepper the film with a measure of believability. Lee Je-hoon, for instance, who played Il-young, the stoic young commanding officer with a morphine addiction to numb the pain, and Ko Chang-seok who played Yang, the seasoned veteran who fought against the Japanese and lived to tell (and tell and tell and tell). It’s the quiet moments spent inside tents and spider holes sipping rice wine and hazing the rookie they’ve taken under their wing (Lee Da-Wit) that give the film its meaning and ultimately its heart.

The Front Line is playing in select theaters in North America. You can find the list on the official site by clicking here. It’s also available to import on DVD and Bluray.