I Know You'll be My K-Pop Star

I openly admit that I do not like Korean shows that much because I feel that a lot of the humor and drama is repetitive. I mean, look at all of the variety shows and dramas and tell me that they don’t share similar if not the same punchlines as other shows! Having said this, for some reason I see myself attached to K-pop Star similarly to how Gil is attached to Shut Up! Flower Boy Band. Maybe it’s because of the fact that the Big 3 (BoA representing SM, Park Jin-young, and Yang Hyun-suk) are the judges, or maybe it’s because I was really bored and wanted to procrastinate. Regardless, the show is entertaining to watch. After a marathon of the episodes, I have grown attached to some of the contestants, but on the flip slide, there are some who I just don’t understand why they’re still on the show.

In the past episode we are left with ten contestants, and to make matters more interesting, the competition has been moved to live footage. Everything we get from the contestants is not edited (or at least, edited minimally), and we get to see who shines without any production bias. For those that haven’t seen the show, I am about to spill a spoiler on who the final 10 contestants are, so go catch up on the show then come back to this article. 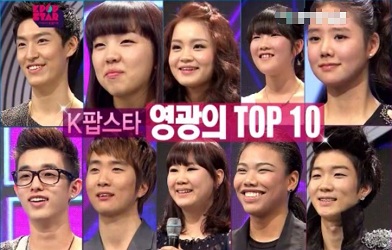 Are you guys surprised? I’m actually not surprised at all, with the exception of Sung-hoon, but that’s because I thought this was a singing competition and he definitely does not sing as well as the other nine. Here are some opinions I have on some of the contestants. 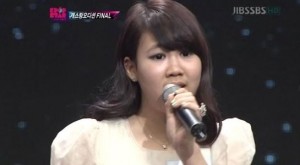 If you watch K-pop Star, you’ll know that she is the one the most popular contestants, and the number of viewers that watch her performances on YouTube prove her popularity. Her “Rolling in the Deep” cover has over 2 million views, and still counting. I think she’ll end up in the top 3 because she is indiscriminately good at singing and has the most recognition out of the contestants in the show. If you haven’t seen Ji-min’s “Rolling in the Deep” cover, go and check it out.

It also didn’t help the other contestants that Ji-min and Michelle along with Lee Seung-ju and Lee Jung-mi formed 秀Pearls. When they were in a group, they were the center of praises. The judges could not stop saying how much they loved this group, and some viewers wanted 秀Pearls to just debut. The praises from the judges are justified not only because the group had four power houses, but also because the group had a superior teamwork. They knew each others’ strengths and built upon those strengths. There wasn’t any weak singer among the four, and everyone held their own, but Ji-min got the most publicity from this group along with Michelle Lee trailing close behind.  Take a look as to why this group made everyone else look bad with their remake of SNSD‘s “The Boys.”

Jeong-mi seems to be the underdog of this competition because she seems to be overshadowed the majority of the show even when she was in the mega group 秀Pearls. Throughout the majority of the survival audition, the judges had indifferent feelings about her. It was when Jeong-mi singing her heart out to get the chance to take the last casting card when everyone else gave up, and the judges started to recognize her talent. In the next elimination round she beat out Jae-hyung and Sung-hoon for first place in their division because of her passion and sincerity for singing. I agree that she has the passion for singing, and I hope she continues to show her passion through out the competition. Here was the turning point performance for Jeong-mi singing Lim Jeong-hee’s “I’m Going Back.” 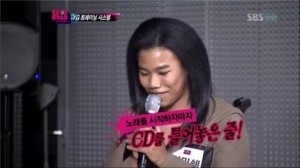 I knew from the first episode that she would get far in the competition, and everyone — even Park Bom — is amazed by her talent. Everyone knows that she can sing, but apart from that, what people talk about just as much is her unique background.  She is half Asian and half African American. Her father was a soldier and met her mother in Korea, but left shortly afterward so that her mother had to raise Michelle on her own. Because she is mixed, it has brought a lot of attention, good and bad. I can only hope that Korea will learn to be more accepting of different racial appearances (after all, she is ethnically Korean since she was born and raised in Korea), because it is sad when people are unable to fully embrace integration and change. This will only continue to be an issue unless we decide to change the ways in which we think. Regardless of her race, Michelle is still undoubtedly a strong contender. In this last performance, Lee redeems herself  from a previous sub-par performance with Lim Jeong-hee’s “The Tears I Didn’t Shed.” 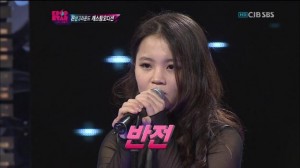 I have this thing with soulful singing, and Ha-yi posses this type of style. It’s weird because Ha-yi is a reserved looking 96-er, but when she starts to sing on stage, she transforms into this confident women that sings by the likes of Amy Winehouse. Just like Winehouse, Ha-yi grabs my attention from the first note. I do think that she still could use some improvement in putting more “umph” into songs, but I know that she is also continuously improving each elimination round, and in this latest elimination round she manages to beat Ji-min in their division for 1st place. Here is the performance of “Mercy” that beat Ji-min. 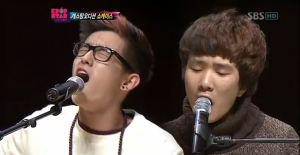 This is my favorite pair of the show because I sense their raw talent. They did not get as much recognition as 秀Pearls, but they performed just as well. They don’t have any gimmicks or any glamour shots, but instead are quite simple. In my opinion, their “It Hurts” performance  is one of the most emotional performance out of the whole show because of its sheer simplicity. I have a firm believer that less is more, and with this cover I felt they were spot on . 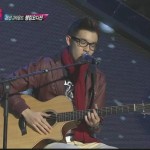 Separately, Jae-hyung and Hyun-sang are the opposites from each other. Jae-hyung is this pretty-boy that seems to fit the idol look and overall image. He already has a following of legions of fan girls. From day one, Jae-hyung won BoA’s heart and other thousands of fangirls with his singing and looks and I can see why these girls fall for him, because most of the songs that he sings are romantic songs that girls love to gush over about. The problem with Jae-hyung is his condition. It seems that in these past few elimination rounds, his throat has been affecting his performance. If this continues on, this can hurt the chances of him winning. If he does win, I would not surprised if he goes with SM because he has the face and clean image that SM loves to harvest. 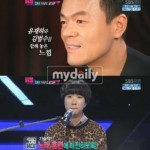 Hyun-sang on the other hand is vastly different from Jae-hyung. Instead of being a pretty-boy, Hyun-sang seems to be almost like an anti-idol. He does not have the “idol looks.” In fact, in his first appearance on the show he looked like a fashion terrorist; he wore a cheetah sweater while rocking the bowl cut. This combination is something that a guy should never have. The other anti-idol characteristic is that he doesn’t have the idol personality. Most idols are friendly and somewhat talkative, but Hyun-sang seems to be very shy and not so outgoing. However, even though Hyun-sang doesn’t seem to have the idol image, what he does have is raw talent. Taking the first appearance he made on the show as an example, even though he looked like a mess, his singing performance was a work of art. Not only did he perform a flawless cover of a song, but he also displayed his composition and lyrical skills when he performed a second song that he made up completely by himself. I think he will go far because his talent can’t be left ignored, but I do not know which company he would go to if he won because he honestly doesn’t fit any of the Big 3 companies that well. 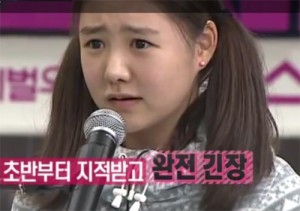 It’s amazing how much hate this girl gets out of all the contestants. It seems that everyone wants to join in on the “I can’t stand Na-yoon” bandwagon, and there are two main reasons why she is getting so much hate. The first widely-used reason is that she is not the best singer. I agree in that her singing sounds awkward at times, but I also think she has her moments. In this last elimination, she tremendously improved with “Hit the Road Jack.” However, prior to this elimination round, her past performances have been sub-par and I even questioned to why she was in the competition, so I can see where people base their opinion that she cannot sing.

The second main reason is because people think she is a fake “slut” for under-age clubbing and kissing an older guy. Oh, this fires me up because first of all who are you to call other people a slut? Do you know what her sexual activities are? Do you follow this person around everyday? If you do then you’re just a creep or someone she knows very well, but if you do not then you have no merit in what you are saying. It’s funny because the people who are hating on her are the people that don’t even know her in real life. And even if she is a slut — which I highly doubt — why do you have the need to hate on her? She isn’t all over your oppa or whoever you man is, so why are you hating? If she is all over your man, then by all means go on hating, but in general people just need to leave her alone. I’m not even a fan of hers, but it just annoys me when immature people have the need to hate on people they don’t even know.

These are some of my thoughts on this show, what do you guys think?  Who do you think is going to win this competition?

Got any biases or people you don’t understand why they are still on the show? Feel free to comment below to let us know.