The DJ Is Underwhelming

The Wonder Girls tore through their Korean promotions — dropping a sizzling album, and performing the heck out of their lead single on music shows. All doubts were set aside as both Wonderfuls and non-Wonderfuls alike banded together to cheer them on during their return. With such success in Korea, and JYP himself admitting in a round-about way that sending the Wonder Girls to the US was a mistake, we all blinked in surprise when JYP announced that the girls would be once again heading back to the US for promotions. Because — why would this man snatch the Wonder Girls’ from their home turf, where they’ve regained the title of superstars, and once again let them suffer in irrelevancy at the US?

Nonetheless, it happened. And the Wonder Girls’ released their new US single ‘The DJ is Mine’ ft School Gyrls:

First let me establish something — I want the Wonder Girls to succeed in the US. I want them to do better than any other K-Pop band that tries their luck on the market. Partly because I believe they have a likability and friendliness that can appeal to a large audience given the right circumstances, and partly because they worked hard for it. I say what I say not out of malice, but concern for the girls.

The video is horrible. I understand that this video and single was released in conjunction with their movie, which is a Nickelodeon production. So I’m not expecting a masterpiece with Oscar-worthy cinematography. But this video looks like it was shot and then imported into Sony Vegas, where they let a twelve year old play around with the contrast and glow effects. Honestly, I have seen AMVs better edited than this Music Video. Even for a Nickelodeon production this Music Video is near the bottom of the barrel. I’m beginning to think the Wonder Girls’ should have gone with the Disney route instead, at least Disney can help make decent music videos. 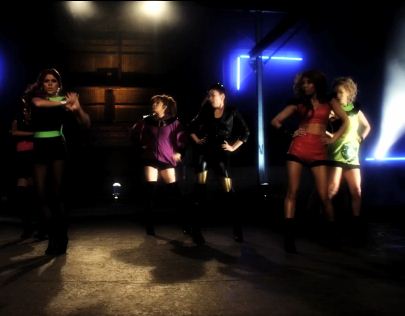 I somewhat understand the look JYP was trying to go for, but it completely backfired. The video was an eyesore, the slight blur was majorly unnecessary. And the lighting was poorly done. Usually with lighting like the one incorporated into this video, the area illuminated should be well… illuminated. Instead the lighting is half-assed and any salient image we’re meant to see melds into the background. I can not believe I’m saying this, but for a good example of how lighting like this is meant to be done, I direct you to Super Junior‘s ‘Bonamana‘. Cheap, but sexy and aesthetically appealing. For ‘The DJ is Mine’, half the music video was shrouded in darkness, and there was little aesthetic appeal to make up for… anything. It was as if I was watching this dark blur for three minutes.

Also, I’m in the minority who finds JYP’s constant self-promotion and troll-like ways super endearing, but that tacky JYP logo in the corner of the screen needs to go.

The song isn’t bad. The song isn’t remotely bad. In fact, considering Nickelodeon’s past endeavors it’s pretty good. I don’t want to tear into it too much, because there honestly isn’t much to tear into. But there isn’t much to hold in high esteem either. The lyrics are a less sassier version of ‘The Boy is Mine’, but that’s okay I guess. Because I can’t think of too many mainstream songs these days with profound lyrics. I do have one recommendation though, that they change the line ‘he only rocks to my music’ to ‘he only rocks to my rhythm’. Just putting that out there. 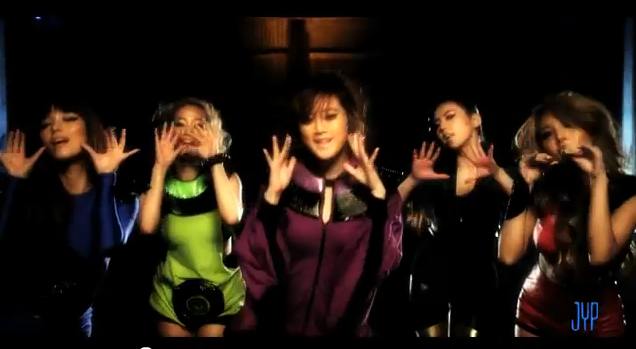 And now, the elephant in the room. Yes, The School Gyrls did do a better job with this song. I’m going to cut the Wonder Girls some slack, because they aren’t native English speakers, and The School Gyrls are — but I’d be lying if I said they weren’t outperformed. In particular, the girls who did Sohee and Lim‘s segments during the song were obviously better singers than the latter. It shows. Sohee sounds so weak, flimsy, and soft compared to the second verse, and Lim just comes off as really unsassy and plain. On a positive note however, Yubin’s rap break was pretty good all things considered, so I’ll give her props for that.

Whilst ‘The DJ Is Mine’ isn’t an atrocity, it is underwhelming. And I can only hope JYP wasn’t really planning on this single launching the Wonder Girls’ career anywhere. In a music industry as large as the North America’s, the most important part of success is to stand out — and apart from being Asian, the Wonder Girls don’t stand out at all. But what’s the point of being a negative nancy? I just hope their movie will be well-received by their demographic and that the Wonder Girls find a niche fan-base that do like them. To be honest, I’m thinking the Wonder Girls would have a better chance of success if they moved their promotional activities to another Western country. Like Britain, where girl groups aren’t completely outdated. But then again, I don’t want to give JYP anymore ideas.