On behalf of my inner nerd, I owe whoever was smoking a joint and watching old Michael Jackson videos up at Core Contents Media’s creative department a kiss and a hug. This is the same nerd who insisted on staying at home Halloween night to watch Night of the Living Dead instead of going out to steal candy from children, and the same nerd that obsessively followed The Walking Dead, schoolwork and exams be damned. Because really, whoever expected anyone in K-pop to come up with something so deliciously absurd? Convoluted drama storyline MVs? Done and been done. But zombies chewing up a nightclub, including the lovely ladies of T-ara? Not so done.
[youtube http://www.youtube.com/watch?v=CJ0djllyqwY]

As you might have guessed, the concept and the plotline of the MV isn’t exactly a complicated one. There’s a nifty cameo by actress Im Soo-hyang tying together the beginning and the end of the video, but other than that, things are straightfoward. Zombies invade a nice little dance club where T-ara is performing  and start munching until nobody but T-ara themselves is left, with only a little metal grating and a wimpy security guard between them and the undead. Of course, the little metal gates fail and the members of T-ara end up becoming zombies themselves. The show must go on, though, and apparently even zombies are capable of pulling off a neat shuffle. 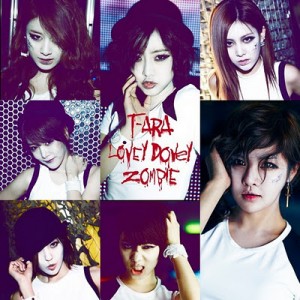 Sadly, though, the little dance moves may be the most glaring flaw in this cute MV. The problem with the dance? There’s far too much of it! When you’ve got a fantastic, hilarious concept and you sprung some cash dolling up all the backup dancers with fake wounds, why would you waste so much of your time on shots that look like they could have come out of any formulaic dance shot-close up-party scene MV? The zombie concept is what sells this thing, and for the concept to be properly pulled off, the creative team really needed to go for broke. For heaven’s sake, it’s a zombie invasion set to a cute little chirpy soundtrack. If that didn’t call for the proper B-movie treatment, I don’t know what does.

As far as the zombie aspect of the video goes, it was definitely toned down. Of course, no one would expect them to go all blood and guts in a video meant to air on music television and not late night sci-fi specials, but it was so tame I was almost shocked. The zombie make up itself was disappointingly cheap looking as well. Honestly, it may as well have come off of the shelf, from those Party City Halloween costume kits, because it wasn’t particularly convincing-looking. Again, nobody was really looking for top of the line make up effects, and the people who did the styling were probably operating under tight time constraints, but it’s hard to really bask in the cheesiness of the thing when the zombies don’t always look like zombies. And speaking of zombies not looking like zombies, the transformation of the T-ara girls into zombies was definitely a let-down. They had nowhere near the amount of fake blood that the backup dancers had. In fact, they looked mostly the same, just a tad paler and with a scratch or two.

That’s not to say that this video is a complete failure as a horror special. The bit with the metal grate was effective, if not original. Perhaps the lack of the originality was what made it so effective: it called on all those familiar movie tropes, and added to that B-movie tribute atmosphere. I’m especially impressed that a girl group, and not another “beastly” boy group took on the challenge of a zombie music video. Pleas for more originality in K-pop have been more and more urgent as of late, and T-ara, interestingly enough, is the group that seems to be taking it upon themselves lately to shake up the status quo. Even if they’ve had a few missteps along the way, they’re proving to be one of the most interesting groups to emerge out of the current glut of idol groups. T-ara and Core Contents Media, I salute you for tickling the fancy of my inner zombie fan and look forward to your next adventure in filmmaking for “Lovey Dovey”.