DJ, Put it Back On: A K-pop Field Test

Last night, a friend of mine had a Bring-Your-Own-Music-Friday party, which is essentially a chance to dance, drink, and listen to music you wouldn’t usually listen to. We were each given a slot in which we could present our playlist, and if it went well, we earned the right to do it again. This was my first time in the spotlight, and I was keen to make an impression — something that K-pop never fails to do. There was a 15 song limit, and the playlist was as follows:

There are lots of other songs that I would have liked to use, and I had to include some upbeat dance numbers that don’t always showcase the idols best vocal talent. Nevertheless, I was confident with my choices. My crowd? About thirty people between the ages of 16 and 21, all ready to walk out it the music wasn’t to their liking. Come on, K-pop, I thought, don’t let me down now.

Luckily, the “DJ” before me had made the fatal decision to play about 10 Kate Bush ballads, and was by consequence booed off. The crowd was eager to get moving, so I said a quick prayer, put on 2NE1, and sat back to enjoy the show.

As soon as the beat kicked in, everyone took notice, but the Korean threw them off a bit. However the genius of the “bamratatata, tatatata ta!” meant you didn’t need to understand the language in order to enjoy it, and the girls killed it. It was brilliant, and I was sure now the crowd was over the language barrier it would only get better. It did — “Ring Ding Dong” (and its iconic pelvic thrusting) rounded up whatever stragglers there were and the single English meant it was easy to sing along.

“Shock” received a less enthusiastic reception; Yoseob’s opening lost a few people back to the side of the room, and the song probably requires more choreography them “I Am The Best” to really enjoy dancing to it. Still, quite a few commented on the vocal quality, so not all was lost.

After that, it continued to go well — with “High High” becoming the song of the night — until we got to “Run Devil Run”. It may hav 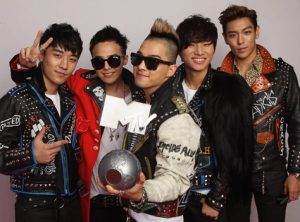 e been poor song choice on my part, but the dance floor pretty much emptied. Maybe next time I’ll try “The Boys” and see what the reaction is. But “Neverland” reclaimed the attention, while “Muzik” and “Hands Up” kept it. “Dang Dang Dang” actually got some serious dancers freestyling and “Abracadabra” inspired the dirtiest dancing I’ve seen in a long time. To round it off, lots of people recognised “Tonight” from the EMAs. And with that, my playlist finished with a bang (if you’ll pardon the pun).

The verdict? Overall, the K-pop had a far better reception then I expected, but it was the right atmosphere, the crowd wanted something different, and were used to foreign languages in music. I doubt K-pop would fare so well in a normal club or at a party. Still, it was heartening to know that K-pop had been accepted in a corner of the West, and I have been invited to do another stint at some point. So, dear readers, any songs you think would go down well?