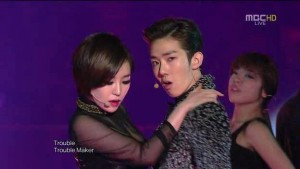 The last week of the year is always a good one in K-pop as Gayos and Award shows abound.  What were my top 5 Things I LOVED in K-pop in the last week of 2011?  Keep reading to find out what I thought was a bit more special than the rest.

I thought this collab of rookie groups that MBC thinks will be big in 2012 was a nice showcase for the newbie groups of B1A4, A Pink, Teen Top, Dal Shabet, Girl’s Day, and Boyfriend (although I almost didn’t include this because Girl’s Day’s costumes almost killed me).

Lee Jang-woo was supposed to be MCing with virtual wife Eun-jung at the MBC Gayos (sorry, but the MBC Gayos had the best stages even with the problems), but he missed the earlier part of the show because he was at another channel’s drama awards.  Luckily he came in time to join the “Roly Poly” jam. It was so cute.

The last episode of Running Man was their “Idol Special” with Siwon from Super Junior, SHINee‘s Minho, Sulli of f(x), Sistar‘s Hyorin, and the Wonder Girls‘ Sohee.  The pairs of Running Man cast regulars thought they hit the jackpot when they each got assigned a girl group member, but Song Ji-hyo was the real winner with two boy band members on her team. There was this great game that involved post-its that I gotta try with my friends, but the moment of the episode is when the young bucks take down Spartakooks.

Love, love, love this collab between a few of the members of  T-ara and Davichi.  The song “We Were In Love” wasn’t going to be promoted or performed, but the fans demanded it and I’m grateful for that.  The song was also used in the MV for “Lovey Dovey” which was released on January 2nd- more on that next week.

I didn’t realize how much I’ve missed JoKwon and Ga-in on We Got Married until seeing them together on this awesome live performance of “Troublemaker” on the MBC Gayo.

Those were the 5 Things I LOVED in K-pop This Week, were they yours?