It’s that time of year again, where the award shows air left and right and stars from all aspects of Korean entertainment put on their best and strut the red carpet.  The 2011 KBS Drama Awards were held on December 31 this year, and all the big stars of the major network’s dramas came out in force.  This network is home to some of the year’s most watched dramas, including ‘Smile, Donghae,’ ‘Princess’ Man’ and ‘Ojakgyu Brothers,‘ as well as the idol-filled ‘Dream High.’  With such popular shows in their line-up, it is fair to say that this awards program would be highly anticipated, and the stars certainly dressed to meet this expectation. 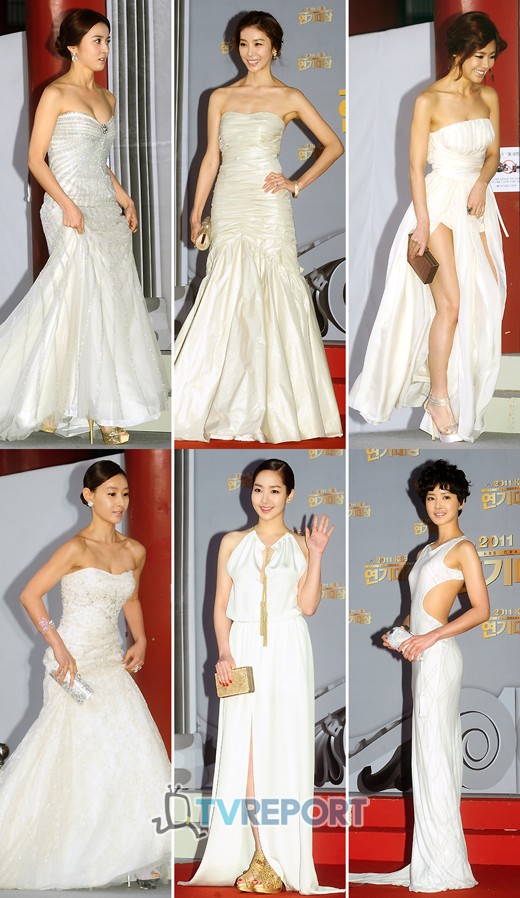 White was the biggest trend on the red carpet for this show with a number of stars choosing gowns in the neutral shade. Han Hye-jin, Han Eunjung and Do Ji-won wore similar dresses with sweetheart necklines and mermaid-style flares.  Lee Yoon-ji’s dress was a different take on the strapless style, featuring a dangerously high slit on each side.  The dress appeared to have built in “wardrobe-malfunction” protection, but it left the daring actress looking like she just may be wearing a diaper under her dress.   Park Min-young looked like a Grecian goddess in her draping white number.  The gold strappy sandals matched perfectly with the chain accents of the dress.  Lee Si-young’s bold backless dress was completely overshadowed by her horrid ahjumma perm.

Many actresses also chose darker hues for the event, with black, navy and charcoal gray all makings appearances.  Jang Nara’s dress was very flattering, with the jeweled accent that wrapped from on shoulder around to drape down her hip.  Hwang Woo Seul Hye’s plain black frock seemed boring in comparison.  Moon Chae-won’s drama ‘Princess’ Man’ was a big winner that evening, but her dark blue dress full of pleats and oddly placed white accents was not one of the best looks.  Eugene looked lovely in a seemingly elegant navy number, but when the actress turned around she revealed a completely open back.  Since she wore her hair down, in loose waves, the effect was much more subtle than Lee Si-young’s. 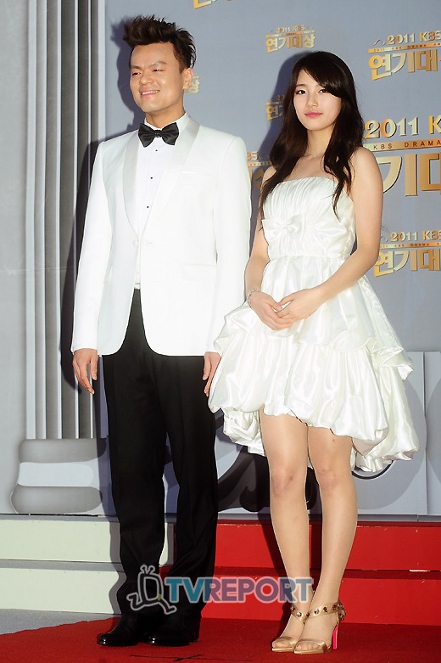 Former Jewelry member Park Jung-ah wore a flirty little black dress that drops just below the knee and had an intricately detailed sheer panel.  Her equally detailed heels made for a winning combination.  Lee Jang Woo took a departure from the normal tuxedo look of these events, but his navy double-breasted coat with black cuffs and pocket flaps looks a lot more suffocating than suave.  Though speaking of suave, JYP looked like James Bond in his white jacket.  He accompanied Suzy, who was sweetly age-appropriate in another one of the night’s whites.  Finally, Uee knocked it out of the park in her short dress with layers of pink ruffles and the jeweled neckline.  Her open-toed pumps feature the same pale color and crystal edging.

Who do you think had the best look of the evening?  Stay tuned for more Drama Awards red carpet coverage!