Oh, SHINee. Every time it gets to the point that I’m good and ready to storm SM Entertainment’s offices, on behalf of the injustices that they’ve inflicted on you boys, they and their affiliates go and give you a solid album like this. Talk about throwing a bone to the fans. Even if the marketing effort is still clearly half-hearted, it’s hard to argue that they’re not at least trying with the tracks presented in “THE FIRST”, SHINee’s first Japanese album.

1.”‘LUCIFER” (Japanese Ver.) – Whose brilliant idea was it to open up the album with SHINee’s weakest Japanese song to date? My thoughts on this song have already been made abundantly clear, but I’ll repeat it again, just for posterity: this song is an atrocity. It was not made to be sung in Japanese, and halfway through attempting to translate it, the production house should have realized that. SHINee’s Japanese pronunciation is actually pretty decent, but you wouldn’t know it from the mangled gibberish that resulted from attempting to cram too many syllables into a single verse. In the first place, “LUCIFER” wasn’t all that inspiring of a song, just a generic dance track made really awesome by SHINee’s spirited performances. Why on earth they chose to remake it and open up the album with it, I’ll never know. 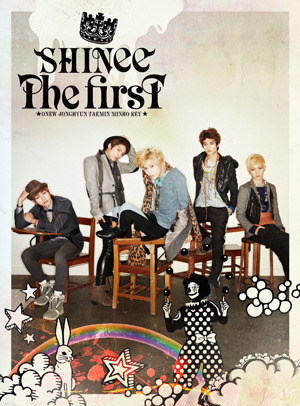 2. “AMIGO” (Japanese Ver.) – And… another remake. This one works in ways that that “LUCIFER” didn’t, though. For starters, it doesn’t sound half as strangled and rushed. It also has the advantage of being a cleaner song in Korean as well as Japanese, doing a decent job of melding a crunchy dance beat and, for once, an effective rap. There’s some Jonghyun vocal gymnastics going on, but in the context of the song, they work just fine. There’s also the distinctive lack of over-the-top vocoder effects that overwhelmed “LUCIFER” making it nearly unbearable. All in all, it’s still a tad lazy, but a visibly stronger effort.

3. “JULIETTE” (Japanese Ver.) – This track is more effective as a remake than “LUCIFER,” but less effective than “AMIGO”. This has more to do with, once again, the original Korean track that they had to work with it. It’s a cheesy song, no doubt about it. Minho’s rap is awkwardly misplaced. It also lacks that distinctively J-pop feel that other parts of the album managed to capture. There’s nothing inherently offensive about it, though. As filler tracks go, it works.

4. “BETTER” – THIS IS IT. This is precisely what I’ve been longing for SHINee’s producers to give them: a @#!*% song written for the Japanese language. See how much better it sounds than the half baked Korean translations? It’s immediately memorable without being overtly catchy. There’s some fantastic emotion in SHINee’s vocals going on here, and Minho’s rap doesn’t stick out like a sore thumb, because it’s taking second place to the vocals in the mix. The piano backing works beautifully, and comes through without overwhelming the song. It’s the kind of song I want to blast in the car while sitting alone in a rainy parking lot after a break up, pounding the steering wheel and trying to hit the high notes. Speaking of the high notes, the song does a lovely job of showcasing how Taemin, usually one of the weaker singers of the bunch, has improved. He’s no Onew, but he’s adding to the song in ways that he couldn’t before.

5. “To Your Heart” – It would have been so easy to drop the ball, following up a solid song like “Better”. Thank God, then, that somebody had the sense to follow up with “To Your Heart”, another fantastically catchy song written for their Japanese album rather than just remade. “To Your Heart” is adorable without being precious, and has a hook without trying too hard to be earworm-y. Onew’s voice is the one shining the most in this track, working fairly well with the mid-tempo pop beat. Am I the only one getting a distinctly DBSK “The Secret Code” kind of vibe out of this? That’s a good thing. SHINee is getting to switch up their sound a bit, and it works. Minho’s rap is as unnecessary as ever, but I can forgive that for a change.

6. “Always Love” – There’s a funky kind of synth line going on here that‘s pleasant on the ears. This song isn’t as commanding as the previous two tracks, but that’s okay.  It’s slowing down the tempo that the album has thus far been holding. The overall feel of this song is more in the J-pop style than SHINee’s previous efforts. Perhaps the executives are realizing the market that they’ve got to be gunning for? Anyhow, Key sounds nice here, and Jonghyun’s vocals aren’t toeing the line into the squealing zone as much as usual, so the vocal performance is much appreciated. See the miracles that happen when they do original Japanese songs?

7. “Replay (君は僕のeverything)” – It’s hard not to love this song. Something about it is just kind of effortless as compared to other boy band offerings in recent times. The pace isn’t frantic. The vocals are slick, but not robotic. It breaks from typical dance-pop into R&B. The line distribution swap may have hurt the opening of the song slightly, but aside from that, the song is just as strong in Japanese as it was in Korean. Thankfully, the lyrical content was changed a bit, as SHINee aren’t fetuses anymore, and it isn’t so easy for them to directly call out the noonas. All in all, it’s a pleasant listen. 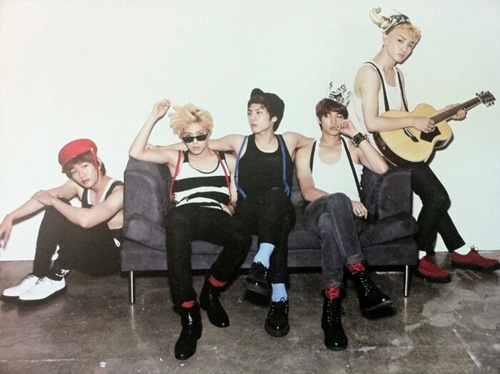 8. “START” – I suppose the new-found maturity really couldn’t last forever. “START” is twee, squeaky, and quite frankly, irritating. If it counts at all, you can’t accuse the song of being filler. “START” definitely established its own identity. And hey, Minho gets to sing a little bit. They overindulged on the vocal effects, though. All of that tweaking of the high notes, particularly Jongyun’s, was unnecessary and ugly sounding.

9. “Love Like Oxygen” (Japanese Ver.) – This one is a little awkward and unwieldy in sound, like the backing track for an aerobics video. The vocal performance isn’t as over-the-top as it was in the original, which actually disappoints me. An over-the-top performance would have added a bit of fun that the song lacks. As it stands, it’s clearly a bit of filler. Nice filler, surely, but filler all the same.

10. “Hello” (Japanese Ver.) – “Hello” is another one making concessions to the twee sound that made SHINee famous. I’m not digging how chipmunk-y some of them are getting. It’s not a bad listen, though. It’s like the more dance pop counterpart of “Replay”: laid-back yet catchy.

11. “The SHINee World” (Japanese Ver.) – Well, here’s one that I wasn’t expecting them to have the gall to remake. It’s delightfully cheesy and self-congratulatory. The lyrics aren’t a work of art, sure. “My name is Minho,” anyone? But it’s fun, it’s a good listen, and who asks for more? I can understand what they’re saying most of the time, even if sometimes the verses sound a little hurried, which is definitely a good sign. They’re not jacking up their vocals into the little-girl range, instead remaining in a comfortable octave. Taemin sounds — dare I say it? — Kind of sexy.

12. “Seesaw” – Oh, this is pretty hot. I’m getting serious DBSK vibes all over again, and I promise, that’s a good thing. They finally get to be all grown up! Their voices suit this, seriously. The deep bass and that harp that’s going on about halfway through are massively enjoyable. They should have kicked “START” to the curb entirely, because “Seesaw” is quality enough to stand for two songs. Remember, sometimes quality goes over quantity. I can take one or two songs less on an album if the ones left in their place are along the lines of “Seesaw”.

13. “Stranger” (Bonus track) – It’s like a J-pop redux of “Love Still Goes On”. Again, that’s a pretty good thing. It makes a competent track without resorting to throwing everything and the kitchen sink at the listener. Key is the standout this time around, as he usually tends to be with this kind of funky track. There’s not much to criticize, but it’s not immediately groundbreaking either.

All in all, “THE FIRST” was a highly enjoyable album. Production stepped up their game for the original Japanese tracks, and it shows. In fact, “Better” and “Seesaw” are probably the best things I’ve heard from SHINee in a very long time. Here’s to hoping this quality will pay off in a bit of monetary success, and perhaps follow them back home when they set about recording their next Korean release.

What did you think of “THE FIRST”? Do you think that it stands a chance at commercial success?