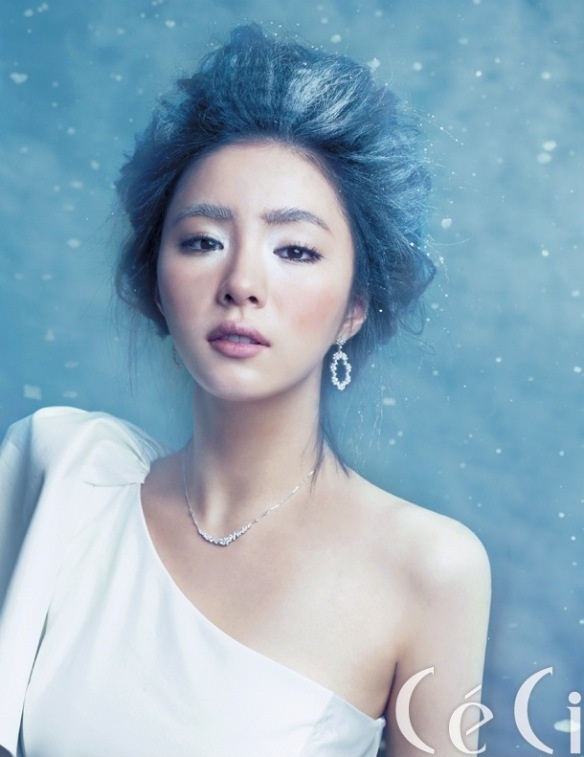 In this month’s edition of Ceci magazine, Shin Se-kyung dresses as a snow queen in a blue-and-white world of frost and bunny rabbits. For those who don’t know Ms. Shin, she is the former flame of SHINee’s Jonghyun and an actress that has stared in Cinderella and most recently a remake of Red Scarf, opposite of Rain.

In this photo shoot, she wears pale clothing that looks as light as snow, her cheeks rouged into apple-red, her hair blue with frost, and her skin glistens with ice. The lady looks gorgeous and ethereal as she poses around a fluffy white set. Maybe she wears a little bit too much blush, but I find her bright red cheeks to be endearing. There’s something adorable about rosy cheeks, especially when it’s freezing outside. The shimmer on her face reflects light and has the effect of giving her face luminescence. Adding shimmer to the apples of your cheeks is a easy way to make them stand out as well as bring out your eyes.

During the winter months, this Winter Wonderland theme is often used. It brings to mind images of storytelling, Christmas carols, Santa Claus, and magic. Worlds blanketed in white snow are oddly enchanting and a bit nostalgic, for all those that grew up watching Christmas programs. For this photo shoot, I loved the whimsical feel of it but disapprove of the cheap-looking set. The clothing she wears isn’t winter appropriate and seeing her lay in that field of fluff while wearing that little white dress makes me feel cold. 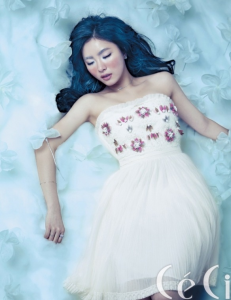 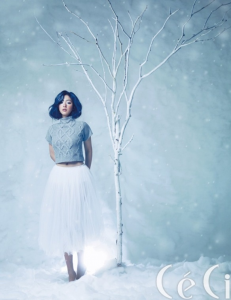 Beginning with my favorite picture in the photo shoot, Se-kyung wears a strapless white dress with flower embellishments on the bodice. She appears to be slumbering on a bed of white silk. She looks like Snow White in this photo, waiting for her prince to kiss her awake. In the second photo, Se-kyung stands by a thin white tree, barefoot, wearing a white tulle skirt and short grey sweater. The small amount of skimpiness the sweater has throws off the look a tiny bit, but I do like her skirt. Her hair is shorter in the second photo, making her look a little older. 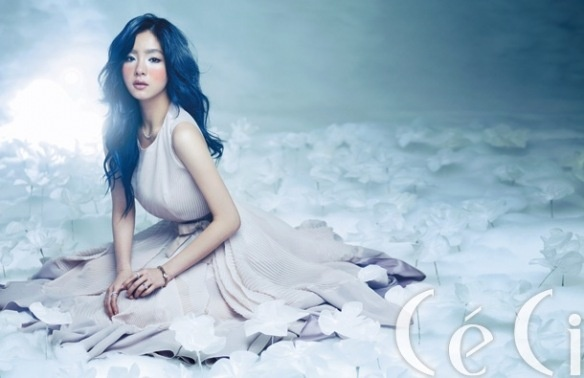 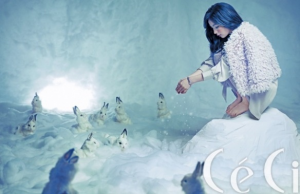 Se-kyung wears a floor-length nude dress as she sits in a field of white flowers. This time, her blue-black hair is long and wavy. The set is a little cheap-looking in the last two pictures but Se-kyung’s prettiness makes up for that. Her outfit is difficult to make out in the fourth photo but by the looks of it, she’s wearing a towel over her shoulders. I think I also spy a white sweater. Poor Se-kyung looks lost and lonely in this pic, despite being surrounded by cute bunny rabbits.

This photo shoot is one of my favorites for this month. Because Shin Se-kyung isn’t a Hallyu Star, I’ve never been a fan of hers nor have I ever followed  her career. I mostly know her for once dating Jonghyun, which caused her to go on hiatus for awhile because of upset fans. I find this deplorable and wish her relationship with Jonghyun had been received more warmly.  The two had separated, reportedly because of their conflicting schedules. Although not a Hallyu star, Se-kyung is reportedly a household name in South Korea and you never know – maybe us international fans will hear more about her in the future.

What do you think of this photo shoot? Do you like Shin Se-kyung? 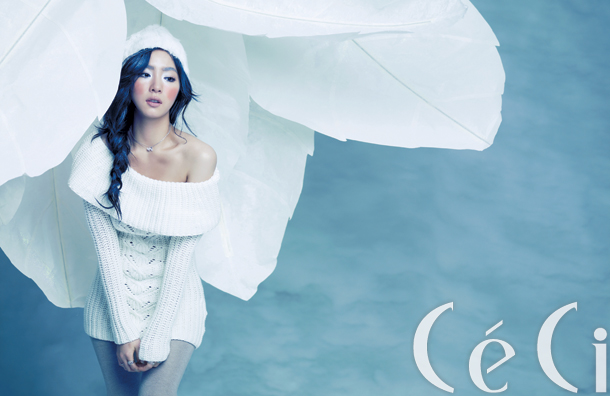