"Letters From Angels": A Matter of Korean Pride and Prejudice 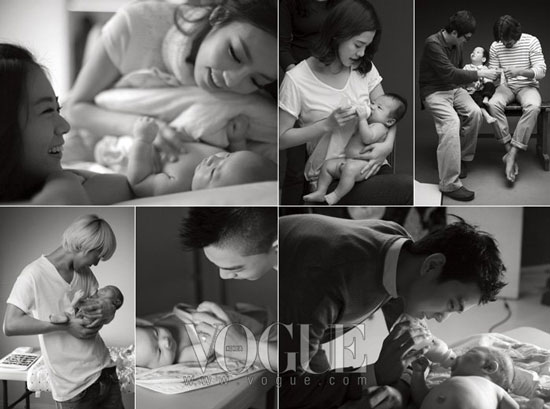 “This year, these days, a lot of stars and angels have played in front of my camera.” Commenting on his annual Letters from Angels exhibit via Twitter, photographer Cho Sei Hyun (@4portrait) shared this message with his followers along with behind-the-scenes photos of the ninth installment to his exhibit, this year themed “gaze”.

From KARA to Big Bang’s G-Dragon and Taeyang, to actress Kim Hye Soo and, former Mayor of Seoul, Se-hoon Oh, Cho has photographed a list of celebrities, as well as important government officials, posing them with orphans whom he’s christened as “angels”. His idea for a campaign, whose purpose would be to raise awareness and promote domestic adoption in South Korea, kindled after being approached by a social worker, and asked to photograph a 100-day-old baby who was up for adoption. Known for having the longest running international adoption program and having sent over 150,000 babies overseas since the end of the Korean War, the South Korean government, has been encouraging domestic adoption since the late 1970’s with moderate success. Raising the question: How can K-pop idols and celebrities end the long running struggle with this issue? 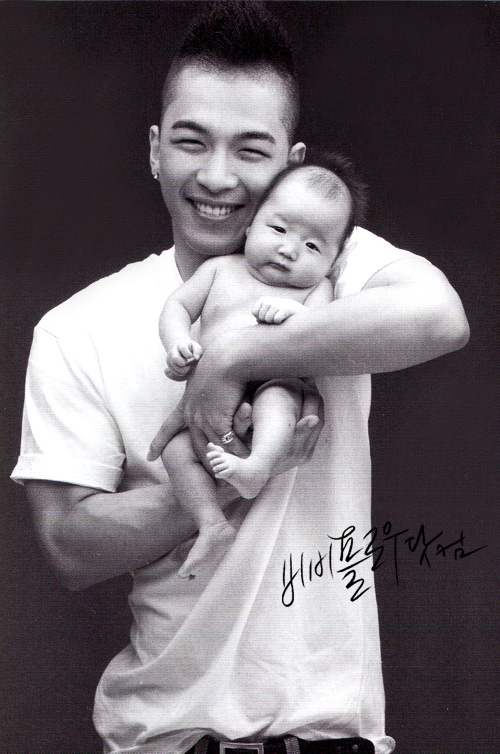 Initially, international adoption prompted as a response to the biracial children or “G.I. babies” (born from Korean women and foreign military personal, mainly Americans) who could not find adoptive parents in Korea. Yet, today, 90% of the adoptees belong to unwed mothers who cannot care for them independently and so are forced to give them up (Dawn. “South Korean Adoptions: Canary in the International Adoption Mine?” Creating a Family. 13 Sept. 2011. Creating a Family. Web. 11 December 2011).

The importance of bloodlines as well as Korea’s Confucian based society, in which there is a strong emphasis on patrilineal lines, has not only lead to mothers abandoning their children but also reluctance to adopt even ‘pure’ Korean children creating only two options: being raised in orphanages or international adoption. In 1990, South Korea became the primary country from which US citizens adopted (making up to 30% of US international adoptions) only dropping by 10%, in the early 2000’s, after a revision of the international and domestic adoption laws, and initiation of foster care programs that encouraged grandparents and other relations to become the child’s caregivers (“International Adoptions Facts.” 2002. The Evan B. Donaldson Adoption Institute. 11 December 2011 <http://www.adoption institute.org/ FactOverview/international.html>).

Now, this brief history, and these statistics provided by the Korean Ministry of Health and Welfare neither convince nor disprove. They have only been included in this article in order for the reader to make their own assessments of the issue at hand, and answer whether K-pop idols’ influence and popularity has enough clout to aid in phasing out international adoption by 2015.

After being recognized as an advanced nation and becoming a member of the Organization for Economic Cooperation and Development (OECD) in 1996, South Korea has argued that it has enough economic wealth to care for their own. Overseer of adoptions at the Ministry of Health, Kim Dong-won, was quoted in the New York Times stating that, “South Korea is the 12th largest economy and…an advanced country, so we would like to rid ourselves of the international stigma or disgrace of being a baby exporting country. It’s embarrassing.”(Onishi, Norimitsu. “Korea Aims to End Stigma of Adoption and Stop ‘Exporting’ Babies”. The New York Times. 2008. The New York Times. 11 December 2011 <http://www.nytimes.com/2008/10/09/world/asia/09adopt. htmlpagewa nted= 1&_ r = 2&em >). Whether it is a matter of pride in taking care of one’s own or lowering numbers in order to save face, there exists social prejudice and the stigma against adopting a child without knowledge of its bloodline. 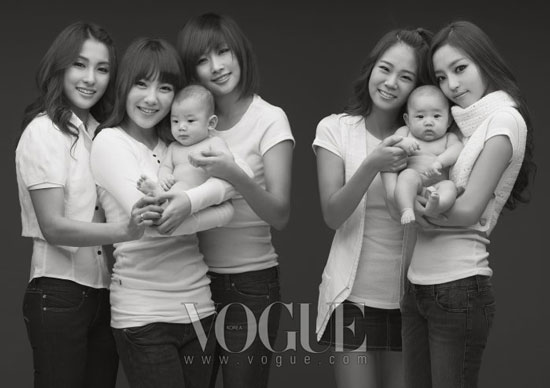 Now, Cho also stated via Twitter that the first “angel” has already turned nine years old. Clearly, this campaign is working but to what extent? Some may argue an “angel” that’s been photographed and held by an idol would have more likelihood of being adopted than a orphan that hasn’t. They may also argue that the fact that celebrities and trendsetters were encouraged to go public about their own adoptions has helped in increasing and leading it to outnumber overseas adoption, for the first time, in 2007 when the Wonder Girls, couple Hong Eun-Hye and Yoo Joon-Sang, model/actor Joo Ji-Hoon, and, drama actress, Kim Jung-eun participated in Cho’s campaign (“Domestic Adoption.” korea4expats. 2011. K4E Consulting. 11 December 2011<http://www.korea4expats. com/article-Adoptions-by-Koreans.html>).  Is this another way for celebrities to seek publicity? It is just another advertisement fueling off an idol’s popularity in order to raise statistics and save face? And, has domestic adoption been disguised as a trend? 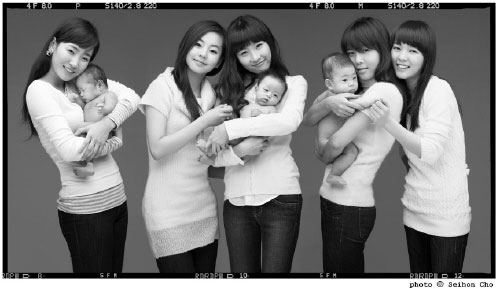 No, a child is not a pair of headphones, a skincare line or a water purifier and Cho’s campaign is a charity exhibition with a forOne license as a social enterprise. The increase was mainly due to the adoption quota system introduced in 2007, which was created to boost domestic adoptions while limiting foreign. Although overseas adoptions did drop tremendously from 3,000 in 1990 to 1,000 in 2010 and children placed in foster care increased, domestic adoption remains on average at 1,400 per year and children placed in institutional care has returned to 4,000 per year while international adoption has continued to hover close to 2,000 in the past decade (“South Korea Seeking to Increase Domestic Adoptions.” 27 November 2011. The Asahi Shimbun. 11 December 2011 <http://ajw.asahi.com /article/globe/feature/adoption_opt ion/AJ20111 127190025a>).

Yet, this isn’t a matter of numbers but perception and, in a conservative society emphasizing on conformity, K-pop has the ability to address and get away with certain social taboos, from bi-racial girl group Chocolat to Heechul and Siwon’s onstage kiss, with entertainment as a guise. K-pop may play with an idea, market it as a group’s image concept and allow its audience to, at least, consider it before being severely criticized then changed or dismissed. For example, the recent choreography alteration to HyunA and Hyunseung’s “Troublemaker” after many fans “expressed their discomfort” when viewing the dance’s excessive physical contact. 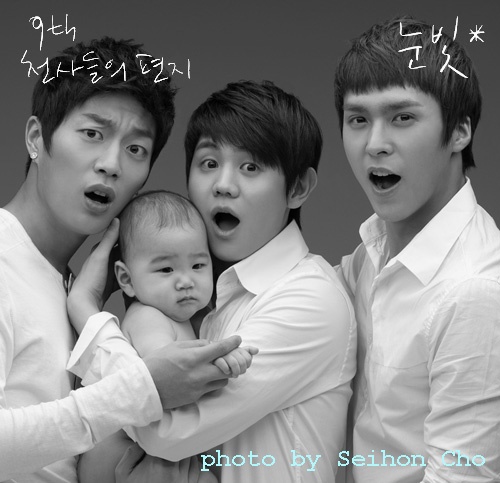 South Korea is an advanced country, whose citizens have taken great pride in becoming one of the world’s largest economies. Yet, their social development has yet to match their economic. Although social taboos may be addressed on-stage, it is still an act and K-pop can only push the envelope not completely change the perceptions of an entire society in which unwed mothers don’t exist because their families and the government provide menial support, and in which adoption is shunned because of a social system centered on blood relations. Yet, not all is lost. In the US, it took 20 years and a social women’s rights movement but single mothers, in general, have gained social tolerance and acceptance. 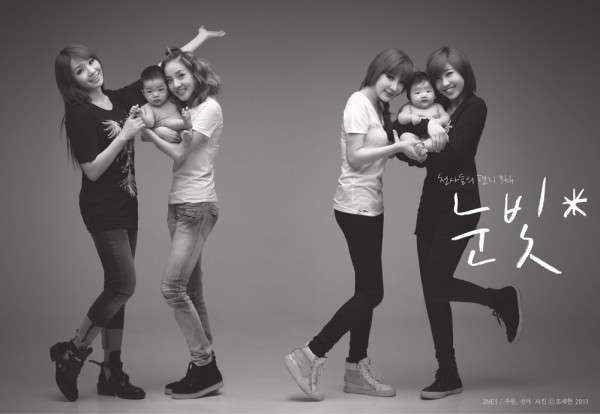 In response to his survey on Koreans’ reasons for not adopting, Kim Yu-Kyung stated, “Attitudes towards adopted children are themselves becoming more positive, but in order to translate them into concrete action, we have to further consolidate activities promoting greater awareness and after care.”(“South Korea Seeking to Increase Domestic Adoptions.” 27 November 2011. The Asahi Shimbun. 11 December 2011<http://ajw.asahi.com/article/globe/feature/adoption_opt ion/AJ20111 127190025a>). Prejudices cannot be completely abolished because they are founded on a human emotion: fear. Fear of the unknown or that which is unfamiliar but, through an exhibit that captures a tender moment between a child and an idol, the sense of compassion, humanity and progression can be instilled without words or statistics. 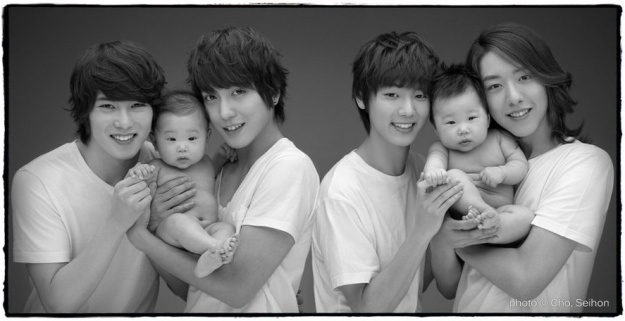 Participating in this year’s exhibit, which is set to run from December 14th- 19th in Seoul, are 2NE1, CN BLUE, BEAST, SNSD’s Tiffany, Nichkhun and, for the third year, Kim Hye Soo.