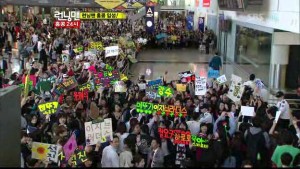 This week in K-pop a couple of Trouble Makers were a bit too hot for TV, Boyfriend released their newest single “I’ll Be There,”  MBLAQ promised to be “White Forever,” Super Junior held a special stage on M! Countdown, Se7en announced his comeback for 2012,VOGUE released a behind the scenes video of Minho and Taemin‘s robot shoot,  INFINITE tells us what’s up “Lately,” and Running Man visits Hong Kong.  What were my top 5 Things that happened in K-pop this week?  Keep reading to find out.

If only I could do this to my house, although I probably wouldn’t be able to afford the electricity bill.  For some strange reason, I feel a part three coming on for next week.

4.  INFINITE gets no respect

from their puppies.  The boys are taking care of three puppies for the variety show Birth of a Family and look what they come home to…  no, not our CD!  At least they didn’t end up with the ponies.

For Gummy‘s latest performance on the reality show I Am Singer, she brought along a dongsaeng for moral support.  The fact that her dongsaeng was Big Bang‘s T.O.P. definitely paid off during the performance.  I can’t get over how all the sunbaes were such T.O.P. fan girls/boys all wanting his autograph.

2.  Running Man gets lots of love in Hong Kong

The cast  of Running Man visited Hong Kong and the fans there showed them lots of love– from the airport to their final destination of the night where an estimated 5,000 fans gathered.  With guests actress Lee Min-jung and C.N. Blue‘s Jung Yong-hwa (who I think is the guest with the most appearances at five) and a special appearance by Jackie Chan as their task master around Hong Kong.  Here’s one of my fave clips from the show where Song Ji-hyo doesn’t mess around with guessing–she just asks the fans for help.  What’s Running Man without some cheating?

1. Whenever You Play That Song

I get goosebumps.  Huh Gak released his latest MV for “Whenever You Play That Song” featuring up and coming girl rapper LE.  The MV stars actor Yoo Seung-ho in a sad love song produced by Shinsadong Tiger.

Those were the 5 Things I LOVED in K-pop This week, were they yours?