The concept is an integral part of promotions in the Korean music industry. It is the first thing fans see leading up to comebacks and debuts; the stuff that hype is made of. Some concepts are amazing, fitting seamlessly with the music they are paired with, while others leave us scratching our heads and wondering what we just saw. The Best of 2011: Concept poll that was featured here on Seoulbeats showed that you readers were really loving the the disco-infused “Roly Poly” from T-ara, Sunny Hill’s darkly imaginative Midnight Circus and the “We’re not going Retro” retro concept from the Wonder Girls, but the hands-down winner was the Brown Eyed Girls. Their political theme caught the attention of the readers and writers of this site. Let’s take a deeper look at what made that concept so amazing, as well as few of the other concepts we loved and hated here at Seoulbeats this year! 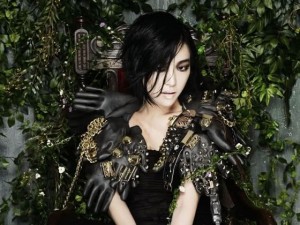 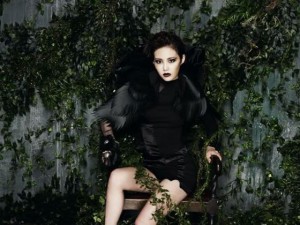 Natalie: I want to begin with my favorite concept for this year, Brown Eyed Girls’ “Sixth Sense.” What I loved about this concept was how strong it was and how it made a statement using symbolism. Normally, K-pop concepts are all surface and no substance. They’re pretty and fun to look at but rarely have any underlying meaning. Brown Eyed Girls, however, dodged the usual gimmicks seen in K-pop and instead created a more original, girl-powerful concept about politics and feminism. In the music video, the girls are rebels against a totalitarian government as well as symbols of oppression. Ga-In, drenched, is confined to a chair and Jea lies in a large wooden wreath in a lake. Narsha looks like a sexy cat as she rolls around in the sand and Miryo, chained, aggressively attacks some microphones. Their concept can be taken in several different ways but I took it as rebelling against conformity and control. Because of the cleverness of the concept, the powerful theme, and the age-appropriate sexiness, “Sixth Sense” is the best concept of the year to me. 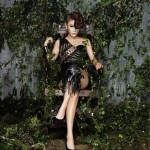 Maddie: Brown Eyed Girls’ fourth album was described as, “Resistance for freedom of expression through music via sixth sense.” and both the album and their promotional song conveyed just that. Breaking away from synth-based and electronic/dance pop music, “Sixth Sense” was a fusion of soulful vocals and classical arrangements inspired by Shostakovich’s Leningard Symphony No. 7. From dark eye make-up to vampy military inspired outfits, their reputed fierce and provocative image was without fault. From the strong cello to the three-part high note towards end of the song, they left audiences not only impressed but with a nice reminder of their undisputed level of talent which can’t be “tamed” nor imitated. Their concept and album were both expressive and liberating and that was exactly what these ladies sought to do. 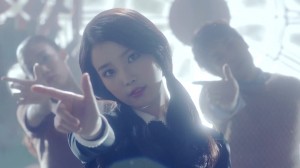 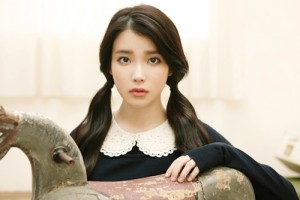 Another well-executed and cohesive album was IU’s Last Fantasy 2 whose concept was described as a “coming-of-age” or “transition from childhood into adulthood” through fantasies and childlike imaginings of adulthood. Her promotional song reflected her second full album in its entirety. With its dramatic and uplifting opening, high vocals and whimsical instrumentals, “You and I” expressed the childlike anticipation to become an adult and experience first love through ingenious musical composition. Its upbeat melody and metronome beat stood out from the typical dance pop music generated by most girl groups. Also, from her youthful, natural makeup, Peter Pan collared outfits and expressive choreography; IU portrayed a young girl with an innocent perspective on love without seeming ridiculous or perverse. Although she has yet to reach adulthood, this eighteen-year-old solo artist has earned her place within K-pop with her album debuting at number 6 and all 13 tracks of her album, simultaneously, ranking at top spots on various online music charts. 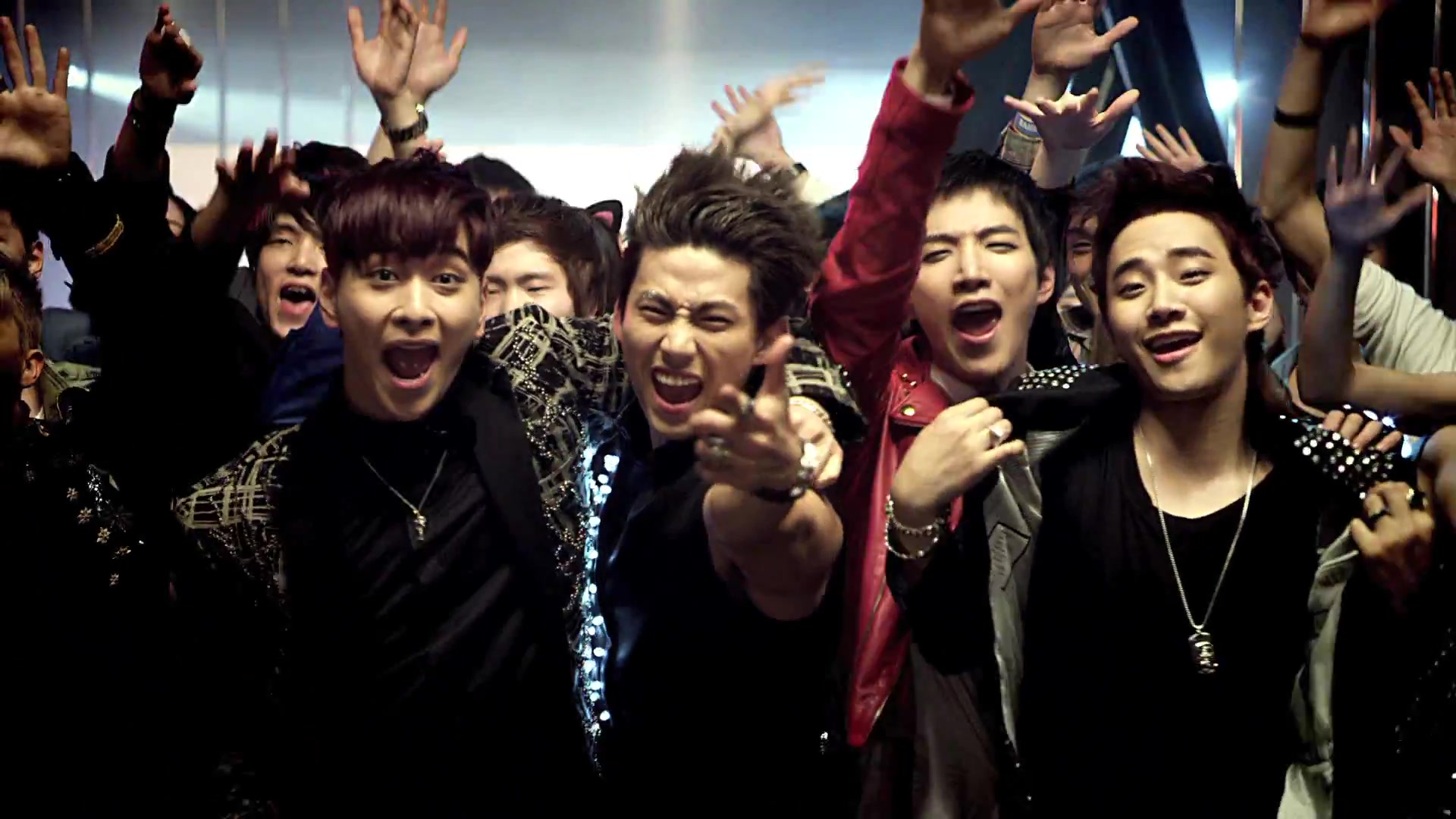 Jessie: The ladies of K-pop weren’t the only ones who had well executed and cohesive concepts this year. 2PM came back this summer with their second album Hands Up, which featured the title track of the same name, a catchy electropop club tune, that saw the boys adopting a party concept. By no means is this type of concept anything revolutionary in K-pop, but given 2PM’s previous releases like the smokey-eyed mess “I’ll Be Back” and the dark, emotional “Without U” this overdone concept suddenly became a breath of fresh air. In both the music video and stage performances, the members were seen partying in a variety of club appropriate gear like embellished jackets and metallic jeans while tipping back drinks and having a good time. The group known for their tight choreography presented easy-going dancing this time, that encouraged crowd interaction and added to the raucous atmosphere. The thing that made this concept though, was that everyone bought into and genuinely looked like they were having the time of their life with every performance, nothing seemed fake or contrived. It was a glimpse of the old 2PM everyone fell in love with in the first place. Of course, the Lite-Brite jackets didn’t hurt either. 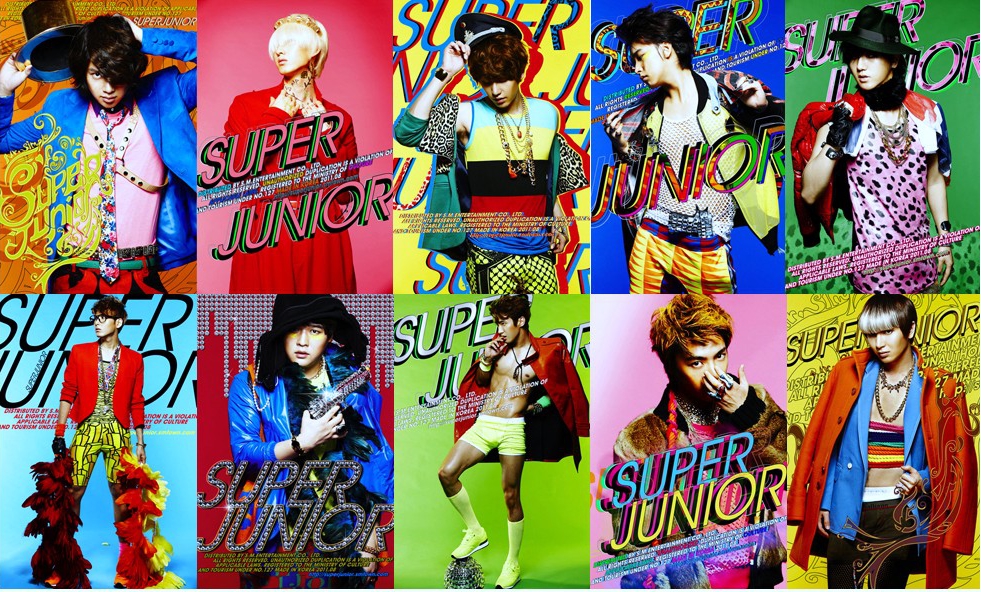 Jessie: Unfortunately, as with all things in life, every good K-pop concept out there is met with bad ones. Since rookie groups like the “D-Cup” Swing Girls or “International” Chocolat will make any crazy attempt to attract attention prior to debut, we are willing to give them a pass this year, but that gives veteran mega-group Super Junior no excuses. When the string of technicolor images began to roll out, jaws dropped. There was nothing about the excessive use of fishnets, feathers, blinged-out guns and underwear, nor the abuse of the rainbow that seemed to fit with the title “Mr. Simple.” No one knew what to expect. What we got was another “Sorry, Sorry” or “Bonamana” -esque music video and performance with the guys in nice normal clothes. The psychedelic teasers only served to scare people away from typical Super Junior fare, or disappoint the people that actually thought they might get to see Siwon dancing around in lime green underwear. 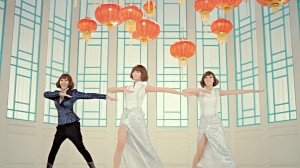 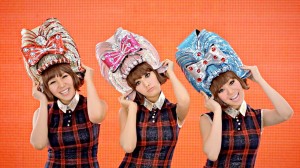 Natalie: Orange Caramel, by far, had the worst concept of the year. “Shanghai Romance” was just awful. The outfits were ghastly and hella tacky, I didn’t like the makeup or the hair, and the overall idea was just WTF. Aegyo and Chinese outfits do not a concept make. And the overly bubbly and cutesy song did not please me. 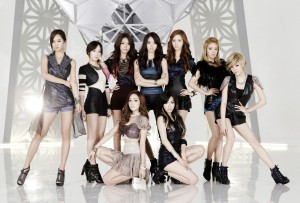 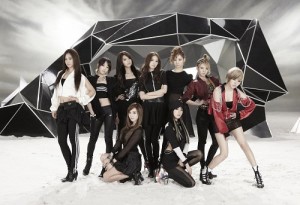 Maddie: A concept who received very mixed reviews this year because of poor execution was SNSD’s The Boys. Their third studio album (excluding Japanese version of Girls Generation) was produced with globalization in mind, and their promotional song was intended to be their introduction to the West. Yet, despite raising high anticipation for their innovative and original new concept, the most-dominating girl group in K-pop fell short in meeting expectations. Their promotional photos for “The Boys,” depicting them as fairytale heroines, were beautifully photographed yet were misleading considering that their lead single portrayed a completely different image. The choreography and styling in their MV for “The Boys” were impeccable and nothing short of SNSD caliber, but something seemed to be lacking overall. This owed greatly to the fact that the solid connection between the heroine concept depicted on album cover was neither present in their promotional song nor was it strongly illustrated throughout the album. Although “The Boys” (Korean version) ranked number one on both the Gaon and Billboard K-pop Hot 100 music charts, the English version ranked at 62 in Korea and didn’t even place on Billboard’s charts. SNSD still had the best selling album this year in Korea, yet it seems something was definitely lost in translation. 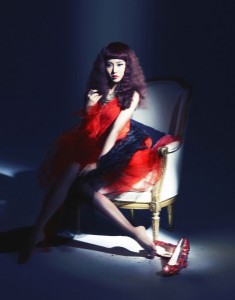 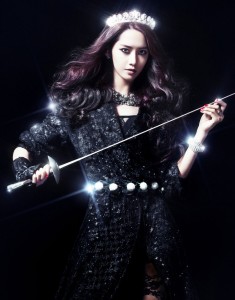 Natalie: I’m going to disagree with Maddie and say that “The Boys” wasn’t a completely bad concept because I liked the idea that their concept had, despite being disappointed by what was actually presented. The concept pictures were pretty and fantastical – the girls were made to look like various fairy tale heroines. My favorites were Yoona, Yuri, and Taeyeon. So I was all geared up for something dreamy and whimsical but instead we were delivered “The Boys,” which left a lot to be desired in a lot of ways. There was little to no connection between “The Boys” music video or song and the concept pictures. There was nothing dreamy or whimsical about “The Boys.” There is no symbolism or meaning in “The Boys,” and if there is it was a very shoddy job (let’s leave symbolism to BEG, please). Still, the fashion in “The Boys” music video was cool and the makeup and hair were pretty (excluding Taeyeon’s Neapolitan hairstyle) and at least the girls all had their own outfits. Their stage performance outfits were freakin’ bomb. So although SNSD’s concept wasn’t the year’s best, I still liked it. 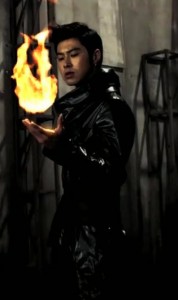 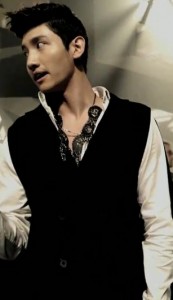 Jessie: It is pretty evident by now that SM Entertainment is unable to produce a concept that is consistent from beginning to end, and this was true with DBSK’s long awaited comeback that was supposed to show the “manlier” side of the duo. While “Keep Your Head Down” did feature fire and explosions and even some shoving matches, it also showcased a lot of cleavage, shoulder pads and diva poses. There was also liberal use of animal-print suits and fur, which doesn’t scream manly, unless worn in a fashion similar to that of Conan the Barbarian. The end result is not always good, but definitely not always bad which earns it a spot as an honorable mention. 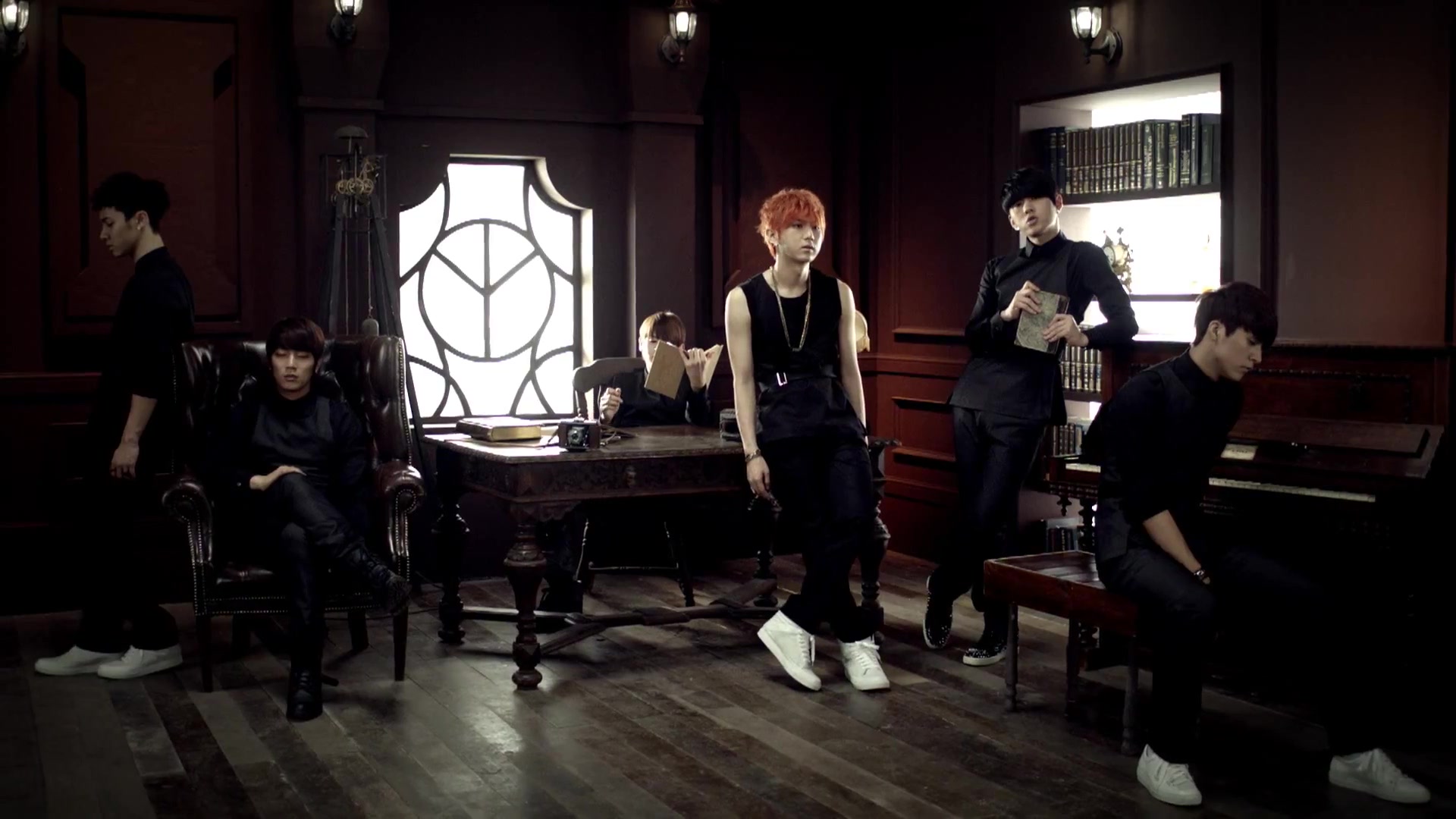 Maddie: This third honorable mention goes to Cube Entertainment’s BEAST whose first studio album was as consistent as it was well executed. By releasing the first track entitled “Fact” as an intro movie/teaser to Fact and Fiction ­and following it with its second track “Fiction”, 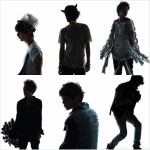 they presented their concept in a creative and comprehensible manner. The transition from inability to accept a break-up to the conscious decision to rewrite their story without an end was a seamless as the track arrangements, which resembled chapters of a novel. From the soft piano melody and poignant lyrics, BEAST broke away from their usual strong sound. The orchestra version of “Fiction” not only amplified the song’s emotionally level but also showed their musical range, and their unplugged version to “Lightless” gave a nice twist to the typical K-pop re-release of a previously recorded song on a new album. Now, although their album was cohesive and portrayed the dramatic novel concept, their promotional photos were very simple. I appreciated their minimalism and emphasis on texture and silhouette. I also acknowledge the difficulty in representing their concept without being melodramatic. How they choose to convey it overall gives them this recognition.

Concepts aren’t simply the integral part of album promotions, but at times also the depiction of the album’s overall concept. They are the first taste, the initial listen. For those who still buy physical copies, the anticipation and thrill in watching a teaser movie or the sequential release of promotional photos can be compared to the struggle in removing the plastic seal off a CD before inserting it in a car radio or laptop CD/DVD drive. Although some leave listeners hanging, others bring them in. Whether it be with a fierce symphonic sensorial experience, a whimsical ride on the Fantasy Express, or a killer electro pop dance beat, they all leave their impression transcending language and cultural barriers and isn’t that what music is supposed to do?