And another month is puffff…… Time flies, but the macabre keeps going strong. It seems that this genre is maturing, and thanks to the readers’ suggestions, there are minor tweaks that we’ll implement to our (dis)honor list going forward: Shindong and Boom are banned from the list. Because. folks, let’s face it: anything that comes out of those two’s mouths could be running for contention to the top 5 every month, and that’s not really fair – it would be akin to cheating. The ban, however, can be lifted at any time, if the two amigos outdo themselves beyond their usual shenanigans.

So, who are the lucky ones for October? 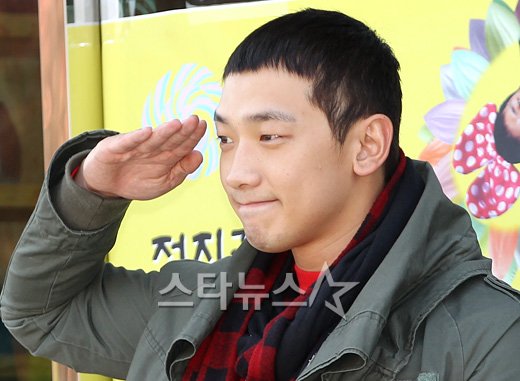 Rain getting ready to go join the army was akin to an elephant being pregnant: by the time he actually entered the gates of Gyeongido training base, one could have been forgiven for wanting to send him off to an Antarctic research station: it was exhausting. But fear not, Clouds: not a day goes by that the earstwhile crooner/dancer/actor does not post handwritten letters to his fans (relatives, managers, harstylists, lawyers). At this rate, by the time he finishes his mandatory 22 months, it will be like he never left. Gotta give Rain props – he’s one hardworking dude. Let’s hope that the Army Lean Cuisine tempers his promoting energies down a notch for the next year. 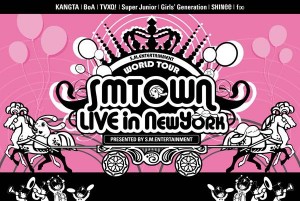 2) Rapping at SM Town In NYC

IT….WAS……CRAP. The rap, that is, not the concert. Not only did it not sound good in English (come on folks, with K-Pop vying for global expansion, hire some English tutors for those idols), it did not look good translated on Jumbotrons and giant screens. Actually, it rarely made sense at all. You’d think with all the formerly-glorious Yank producers that K-pop likes to employ, they’d splurge on a proof-reader or two, that would actually tell them that some of that stuff sounds outright goofy. 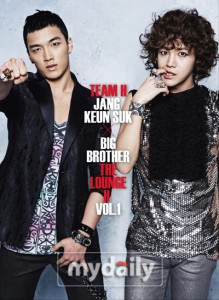 All I have to say after seeing this photo  – Holy S$%t! Is this what gets the ladies nowadays? Because to me, my friends, this does not look like a dude, more like a …..dudette? Or a poodle next to the real dude (aka Big Brother). I wonder if this again is the Attack of a Crazed Stylist, or whether Mr. Jang really thinks this makes him look hot (it does not). What is left to say here, but to use the winner of our last month’s poll – 뭐야???? It seems that Mr. Jang’s recipe for dominating the Japanese/Chinese/Marsian fan markets is to go “soft and cute.” Jang Geun-Suk shhi, this is not cute, it’s kinda outright freaky. 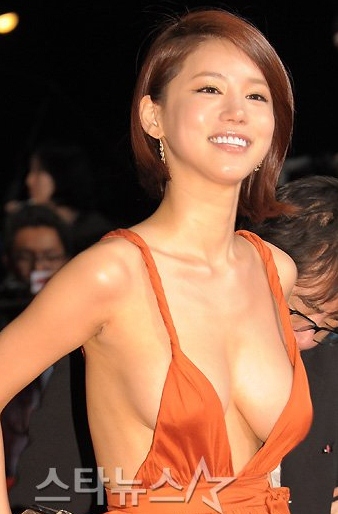 Ah, the annual Vanity Fair of Hallyu – a.k.a. the Busan International Film Festival! Time for the A-listers to shine, and for many non-A-listers to attempt a run at their 15 minutes of fame. This year, this particular non-A-lister, Ms.  Oh In-Hye proved that getting (almost) nekkid usually gets the job done. One could be forgiven for thinking she was walking the red carpet at a Vegas porn convention. Even with her bosoms flailing in the wind, Ms. Oh attempted an interview version of aegyo, stating that she was very inexperienced at attending red carpet events and did not know what would be considered a proper dress code. Big, smoking, steamy pile of BS, anyone? Ms. Oh cannot type and browse the Web? The word “research” is not in her vocabulary? Let’s give the props to Ms. Oh for what it really was – an attempt to get the tongues wagging and people talking about her, because let’s face it, she was successful – after all, we (and millions of others) are talking about her. 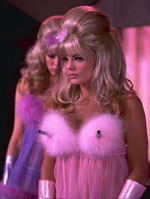 Do not be alarmed – the image on the left is NOT another SM idol group concept (although I would not put it past Lee So-Man) – you better brush up on your Austin Powers trivia. Recently, it’s been revealed that the 8-member girl group LeadersS is actually a unit of a larger girl group Leader, that consists of additional units LeadersG and LeadersT, bringing the glorious grand total to 24. Yes, you ready it correctly – twenty-friggin’-four. The only time a group comprised of so many members would be remotely entertaining is when it would look like the picture above. How many members is one too many? Who knows…