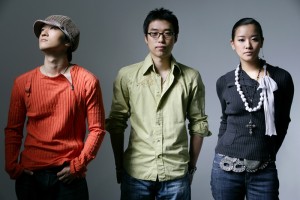 This week’s K-pop Indie Gem was a recommendation by a Seoulbeats’ reader who thought we should give a little more attention to Clazziquai.  Clazziquai or the Clazziquai Project, debuted in 2001 when DJ Clazzi (Kim Sung-hoon) began to gain a following online when netizens discovered his uploaded music.  He began his Clazziquai Project online with the vocals of Alex Chu and his sister Christina, Korean-Canadian siblings that he was acquainted with, their music was a mixture of genres from electronica to acid jazz.  The trio had three successful short experimental albums online after which they released their first official album Instant Pig in 2004.

Instant Pig proved to be a fairly successful album both in sales and critical acclaim.  Several songs from the album appeared in CFs and the song “Bossanova” was featured in the K-drama How To Keep My Love.  Christina Chu left the group due to commitments in Canada and was replaced by Horan.  But what would shoot Clazziquai into the mainstream was the inclusion of their songs “Be My Love” and “She is” on the OST of the mega popular K-drama My Lovely Sam-soon in 2005.

I loved the song “She Is” in the drama.  The group worried that their new found fame would affect the way their fans thought of their music, something that all indie artists encounter when they become more popular.  They released their second album, Color Your Soul soon after which had a funkier sound, but still shot to the top of the charts in South Korea.  The band continued to gain popularity and  reached another spike in their careers when Alex appeared on We Got Married as half of the “Romantic Couple” with his virtual wife Shin-ae. Their song “Romeo N Juliette” was featured on the show and become another hit for the group.

Clazziquai have a ton of great songs out there with their six full albums and 5 remix albums.  Their MVs are always great and so creative.  One of my personal favorites is the song and MV for “Tell Yourself,” check it out.

All three members DJ Clazzi, Alex, and Horan have also pursued their own solo work with all three doing solo songs and collaborations with other artists.  After his successful stint on We Got Married, Alex got involved in acting and appeared in the K-dramas Pasta and Smile, Donghae. Clazziquai’s latest project includes a collab with 2AM‘s Seulong on a track called “How We Feel.”  It’s the song that reader Lydia has had on repeat and prompted her to write in to us.

Thanks again to Lydia for recommending Clazziquai for this segment of Seoulbeats’ K-pop Indie Gem.  when you’re feeling like something a little bit different, try giving Clazziquai a listen.