Counterpoint: Big Bang, it ain't over yet 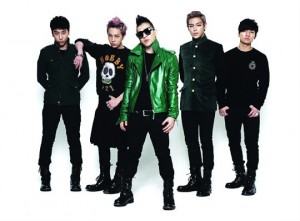 After the events of the later half of 2011 that plagued Big Bang, it’s only natural to question what will become of the band.  Last week, Megan wondered whether or not Big Bang would soon implode due to Daesung and G-Dragon‘s “scandals.”  While Big Bang did suffer a blow to their image and the individual images of Daesung and G-Dragon, it definitely isn’t the end of the band.  It’s not time for the Last Farewell yet.

When Big Bang resigned with YG Entertainment for another 5 years back in April of this year fans thought that they had escaped the 5 year curse which many other top K-pop groups succumbed to.  While Big bang survived disbandment, it seems as though the 5 year curse wouldn’t let them off unscathed and instead of breaking up they suffered some individual hardships with Daesung’s car accident and G-Dragon’s marijuana charge.

At the time of the incident, Daesung was probably at the height of his fame, but the accident that brought the much beloved idol down to Earth was almost too much for him to bear.  In May 2011, Daesung was involved in a car accident in which an individual was killed.  It was really a case of being in the wrong place at the wrong time for Daesung,  we all know what happened that fateful night which resulted in the death of the motorcyclist and Daesung facing charges for Manslaughter and Negligent Driving.  Fans anxiously awaited the results of the investigation and Daesung withdrew from all activities holed up in his room unconsolable.  Daesung wasn’t totally blameless, he had been speeding and distracted and while the victim might have been fatally hurt already there was no definite evidence that Daesung did or did not kill him by running him over.  He was able to settle with the victim’s family, receive their forgiveness, and was told by them he shouldn’t give up his career.  And while police recommended that Daesung be charged, Prosecutors dismissed charges in his criminal case because of insufficient evidence.

What was the most worrisome after the charges had been dropped was that Daesung might decide never to return to K-pop– to not having to deal with grueling schedules, the constant scrutinization, and anti-fans and trolls that called him a murderer.  Towards the end of the year, little by little, a story or two would be released about Daesung–that he was doing well and recovering his self.  In mid October, news broke of the upcoming YG Family Concerts in December and January and that they would mark the return of Daesung.  A week later, it was revealed that What’s Up, Daesung’s acting debut Kdrama which had been put on hold for almost a year was finally going to be aired in December albeit on a cable channel.  And just a couple of days ago, a candid interview of Daesung was released done with his church where he finally spoke of the accident, how it affected him and his faith, and how after the experience he could understand why some celebrities committed suicide.  But Daesung was able to find solace through his faith and decided that he wanted to continue with his career because his voice was a God given gift.  Unfortunately, the carefree and lighthearted Daesung that many of us knew and loved might be gone forever, but in his stead a hopefully wiser and stronger man will emerge. 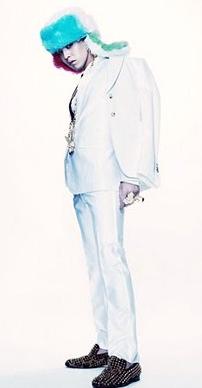 Fans of Big Bang may have thought that things couldn’t have gotten any worse, but they were mistaken.  At the beginning of October, news hit that Big Bang’s leader G-Dragon had been brought in by prosecutors for marijuana use.  The supposed incident happened while on tour in Japan in May with G-Dragon claiming he took a “cigarette that smelled funny” from a random guy in a club.  Seoul Prosecutors called G-Dragon to come in to their office in June to interrogate and test him for drug use.  Because he cooperated with prosecutors, admitted to the offense,  is a college student, smoked only a small amount, and was a first time offender G-Dragon was given a “warning” or suspended charges.  It wasn’t the end of the controversy though as questions arose over why the news broke months after the investigation, the validity of the statements that G-Dragon smoked only a small amount that one time, and that he received such a ‘light’ sentence.  The prosecutor for the case even did an interview to explain the particulars of the case, but you know netizens– it didn’t make a difference in the controversy.

Although not on the same scale as being involved in a manslaughter case, drug use is a big deal in the ROK so all activities for G-Dragon were cancelled until further notice.  What signaled that things might not be so bad for G-Dragon was that almost immediately it was announced that he would not be banned from any of the major South Korean broadcast stations and none of his CF sponsors dropped him.  He was still seen in The North Face, G-Market, Nikon, and Bean Pole ads although maybe on a muted scale.  G-Dragon is an intelligent and talented guy who trained and worked hard for years to get where he is–and I would hope he wouldn’t give all that up for a temporary high.  So, while G-Dragon may have been down, he was definitely not out. 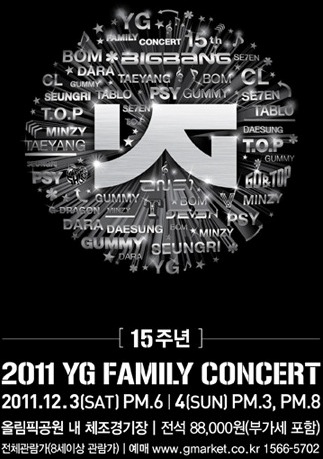 What signaled the comeback of Big Bang as five, was the announcement of the YG Family Concerts in December and January mid October.  While Daesung’s comeback at the concerts were confirmed, G-Dragon’s wasn’t.  But if you look at the promotional posters both Daesung and G-Dragon are included, even GD&TOP– which would make one think that they would both be performing.

While Daesung and G-Dragon were taking a break, the rest of the members carried on to keep Big Bang in the minds of the public.  T.O.P. appeared in a series of photo shoots for W Korea, Calvin Klein Jeans, and 1st Look which were shot in New York City.  There was also news that he might return to the small screen in the Korean remake of Absolute Boyfriend although nothing has been confirmed.  Taeyang featured in a song on new YG Family member Tablo’s new album in the song “Tomorrow.”  And T.O.P., Taeyang, and Seungri represented Big Bang at the K-pop Super Concert in Busan on October 28th.  It says a lot about a group being able to perform even when two out of its five members are sidelined.  It also goes to show how beneficial YGE’s decision to let the individual members of Big Bang do their solo work has been. 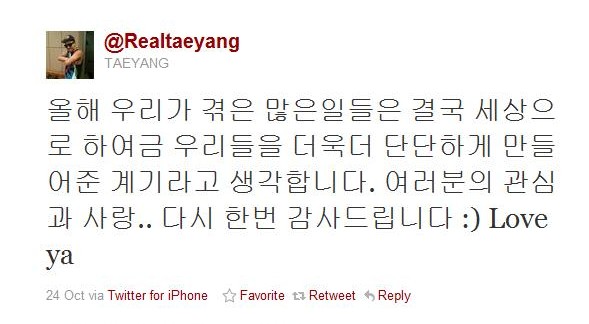 I like to think that the many troubles we went through this year are the world’s way of making us stronger. Thank you all once again for your interest and love :) Love ya.*

It appears to be the attitude that the whole group has been adhering to.  Through the trials and tribulations that Big Bang has endured this year, it seems as if the group stayed true to each other and gave their support to their floundering members. 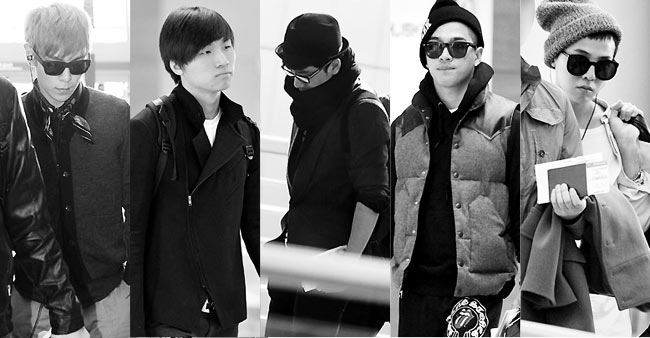 Then news broke that Big Bang won the Asia Pacific nomination for the 2011 MTV Europe Music Awards (EMA) Worldwide Act Award.  The win put them into the running for he EMA’s Worldwide Act Award against other artists like Abdelfattah Grini  from Morocco, German songstress Lena, Brazilian boy band Restart, and US pop vixen Britney Spears.  All five members left South Korea to attend the EMAs which will be held in Belfast, Ireland on November 6th.  Unless you’re familiar with the work of all the artists it’s hard to say who deserves the award, but Big Bang just might be the artist that needs the win the most.

Big Bang is also nominated for several awards for the 2011 Mnet Asian Music Awards including Best Male Group, Best Music Video for  “Love Song, ” Best Dance Performance Male Group for “Tonight,” Song of the Year for “Tonight,” and Artist of the Year.  So although they have been suffering from scandals they aren’t being shunned by the end-of-year awards.

A win at the EMAs could be the boost that Big Bang needs to get back on their feet.  Because while the citizens of South Korea can be unforgiving for every little misdeed of a celebrity, they also can be quick to forget those misdeeds when said celebrity brings international recognition to the ROK.  As K-pop continues to gain worldwide recognition and popularity as it tries to expand to the West, Big Bang is one of the foremost groups mentioned as a K-pop act that has the potential to make it.  It would be a shame if we weren’t allowed to see them try.

The end of their cursed fifth year is approaching and hope for their collective return looms ahead in the hearts of their fans.  Big Bang still has a few good years left in them before they will have to begin entering into military service and a lot more music to share.