This week in Kpop we saw Seo In-young go Oh My Gosh, Jang Woo-hyuk think Back To The Memories, Lady Jane say call her Janie (if you’re nasty), and Rania go Pop, Pop, Pop.  We also saw photo shoots by DBSK, 2AM‘s Jinwoon, and SHINee‘s Minho & Taemin.  Shinhwa‘s Jun Jin completed his military service, Park Si-yeon got married, Yoseob, Dongwoon, and Junhyung released “Dreaming” for the OST of I’m A  Flower, Too, T-ara returned live with “Cry Cry,” and the finals of the K-pop Road Show Cover Dance Festival.  What were the top 5 things that I thought were a bit more special than the rest?  Keep reading to find out. 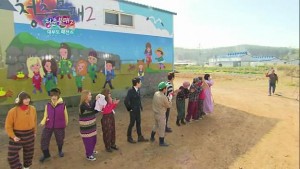 In episode two of Invincible Youth Season 2, some of the girls got woken up by either Boom or Hyun-woo much to their dismay.  Then at the fishing village the G8 competed in a halmoni fashion show, displaying their country work wear.  After Sunny and Ji-young were named ‘Best Dressed,’ it was off to the village mud flats for octopus… um, fishing?  After one of the harabajis showed the girls how to do it the right way, Hyoyeon did it the–wrong way.  I know it was going to get eaten eventually, but poor octopus. 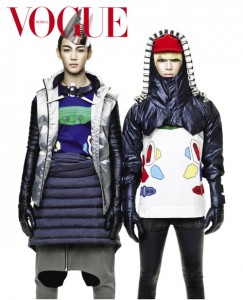 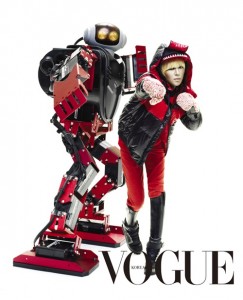 Okay, so it’s kind of weird, but not as weird as some other photo shoots that the boys of SHINee have done.  Minho and Taemin channel “Lucifer” and I guess this is what “Loverholic, Robotronic” looks like to Vogue Korea.  Or maybe it was for a Christmas themed issue so it was toy robot inspired?   The whole pictorial will appear in the magazine’s December issue.  Sign me up for a Minho robot.

On November 8th, Gummy released the short version PV of the Japanese remake of her song “I’m Sorry.”  The PV still starred T.O.P., but the bird man T.O.P. in the PV was vastly different from the motorcycle riding T.O.P. from the song’s original Korean MV.  Just last week, the Director’s Cut of the PV was released, an almost twelve minute PV showing more of the story.  We also learned that the PV was directed by John H. Lee who, unless there’s a bunch of directors out there with the same name, was the director of T.O.P.’s debut film 71:Into the Fire.  Gummy is always great and a few extra minutes of T.O.P… it’s a good thing.

Veteran actor Choi Min-soo returns for revenge on Yoo Jae-suk who sneakily took him out in his first appearance on Running Man back in July–so, it’s Grasshopper Hunting Season.  All the cast, except Jae-suk get taken hostage so Jae-suk needs to find and save all the members and escape from the Incheon Culture and Arts Center to win.  Grasshoppers must have four lives, because that’s how many chances Jae-suk gets to escape from Min-soo.  In the end, it was down to the last life, last lost running man, and last chance for Jae-suk to be triumphant again.

1. Jinwoon releases If It’s Not Now

2AM‘s maknae Jinwoon continues to spread his wings solo as he releases the MV for his song “If It’s Not Now.”  JYPE has allowed Jinwoon to explore his first love of rock music and so far he has been pretty successful in his efforts.  This song was written for him by Yoon Do-hyun, the main vocalist and producer of the Yoon Do-hyun Band, one of South Korea’s most famous rock bands.  The song is an emotional rock love ballad that highlights Jinwoon’s vocals.  The MV makes great use of colors and animation–it’s different, quirky, and well made.  Jinwoon will also be holding his first solo concert on November 25th at theV-Hall in Hongdae to celebrate the release of his solo debut single album.