Recently, YouTube had a featured segment called “K-Pop Fever” under the spotlight section of their main page. The videos included Girl’s Generations’s “Gee,” KBS Qualification of Men’s Senior citizen’s choir performance, 2NE1‘s “I am the Best,” and GD&Top’s “Knock Out.” 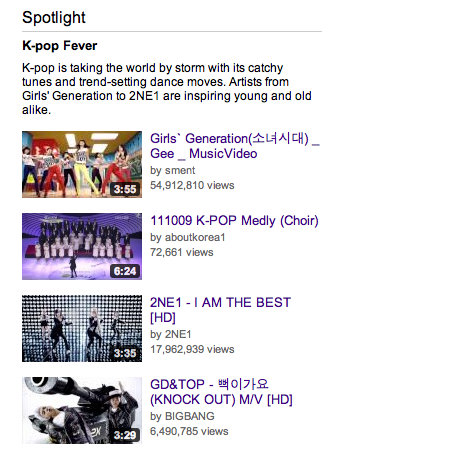 YouTube is one of the main mediums of spreading K-Pop all over the world. It has long been the website to count on for all K-Pop fans to watch music videos, live performances, and even concerts of their favorite artists. Since YouTube is a big part of K-Pop’s expansion, it’s nice to know that YouTube is also supporting K-pop to the viewers. I mean, why wouldn’t they? It seems like K-pop music videos constantly make it to the list of “most viewed” videos, and I am pretty sure all the YouTube viewers have at least clicked once to view one as a curiosity.

More importantly, YouTube does more than provide entertainment to those watching the videos, it’s also a tool for the public to get recognize unknown artists for their talent. One example would be Justin Bieber. We all know he is “The YouTube Celebrity” and since his career has gone off the roof, everyone is dying to be another Justin Beiber in America, and that includes our lovely K-pop idols. It’s no secret that K-pop artists’ goal is to make it out of the small country of South Korea and expand their music to other countries, especially the United States. So far, no one has succeeded in making a name for themselves in the U.S., but they are not about to give up. Because soon, we’ll be seeing both Girl’s Generation and the Wonder Girls albums released in United States.

According to YouTube, the views on Girl’s Generation and Wonder Girls’ videos are as high as other popular U.S. artists. Okay, so their views aren’t as high as Beyonce, Nicki Minaj, or Justin Bieber, but it’s high enough for it to have an impact on their careers. But the reality is, the only people who seems to know of their existence are us, the K-pop fans. While they may be spotlighted, their views don’t really mean a thing in the U.S. and the reason for it is because the problem lies within the viewers. So far, it seems that only those already knowledgeable of Asian pop and Korean pop in particular click on K-pop videos.

My suggestion is that groups trying to make it big in the states advertise their acts in a way to make it little more interesting and little more appealing to the new and casual Youtubers who might happen upon these videos by chance. Since Youtube is such a huge venue, entertainment companies and broadcasting companies should do more to encourage their material populate the site. Remember SBS’ huge crackdown of people who are uploading their videos online? That shouldn’t happen anymore — it’s bad business. Companies, and broadcasting stations in particular, should recognize how important a venue like Youtube is. It’s practically free advertising for anyone who happens to come across a video. Stations like SBS shouldn’t be cracking down like Youtube is the anti-Christ, they should smartly use it to their own advantage. In order to make K-pop truly global, companies need to take advantage of platforms like Youtube. They’d be stupid not to.