I’d imagine this theoretical scenario might sound familiar for some of you:

You’re sitting at your computer, checking up on the latest K-pop news, when you notice a new tweet from your favorite idol, saying something along the lines of:

“Hi Fans! I’d like to introduce you to my new girlfriend! Here is an attached picture. ㅋㅋㅋ”

You immediately freak out (WAIT WHAT?! GIRLFRIEND?! NOOO!!!), and you’re about to tweet a distressed and heartbroken response to your beloved yet traitorous idol. You’re also debating whether to open the picture or not.

After five minutes of agonizing deliberation, you finally make up your mind. ‘I’ve got to support him and be a good fan,’ you tell yourself. ‘I just hope she’s worthy of him‘.

You bravely sum up the courage to click on the link… and you get something like this: 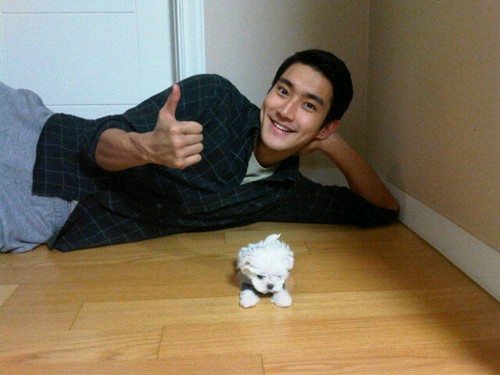 … congratulations, you just got trolled by a K-pop idol. 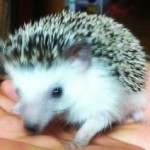 One of KARA's Seungyeon's hedgehogs

In all seriousness though, it does seem like a trend nowadays for idols and actors to post pictures of their pets onto Twitter – and who are we kidding, we love it when they do. What is there not to like? Not only are they cute, but an idol’s choice in a pet says a lot about their individual personality. Pets tend to break down all sorts of barriers in a non-discriminatory manner. People also tend to show a more raw and emotional side of themselves around their pets, who aren’t constantly judging and expecting things out of them the same way other people (managers, group members, fans, and even friends) do. In this aspect, I think owning a pet is something that can be emotionally stabilizing for a celebrity: providing a source of unconditional love and assurance to combat any symptoms of depression they may feel. 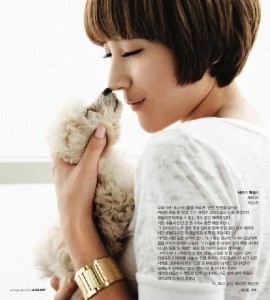 Seo In Young shoots a Vogue spread with her puppy, Bok Soonie

But is getting a pet necessarily a responsible thing for an idol to do? I guess it depends on the individual context. During one of the recent episodes on Season 3 of 2NE1 TV, we are taken through the story of how Minzy first adopts and begins to raise her puppy, Dougie. We are also treated to personal footage of Park Bom‘s two dogs (Choco and Button) as well as Dara‘s experiences with her brother Thunder‘s new kitten (Dadoong). While it is extremely endearing to see how the girls put out so much effort to try and raise their pets properly, the fact that the show also documents their travels to other countries such as Japan to promote for weeks at a time leaves me wondering about the fate of the pets while their idol owners are at work.

In some instances, the questions are already answered. For example, both Bom and Thunder’s pets live at the idols’ parents’ houses, leaving the responsibility of being caretaker in the capable hands of their mothers.

But what about Dougie, who seemingly lives in Minzy’s room at the 2NE1 dorm building? Who takes care of and plays with her when Minzy is pulling an extra-long workday at shoot location that isn’t pet-friendly? What happens when she goes to Japan? How exactly do idols living far away from home manage to have the time to take care of their pets when their schedules are already so tight they barely have enough time to take care of themselves? Does the responsibility resulting from an idol’s whim fall onto the already-burdened shoulders their managers? 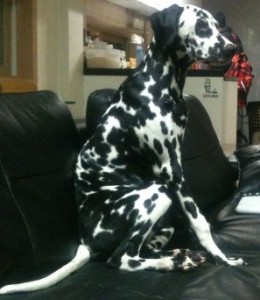 While sometimes I wonder about these things, most of the time, I just take it at face value and enjoy it for what it is. I’m not going to lie, part of the motivation behind this post is because I have a compulsive habit of saving idol pet pictures to a folder on my computer. What drives my fascination? The sheer adorable factor, to be sure. It also triggers my analytical mind into trying to assess just how much of the stereotype – that  people tend to resemble their pets (and vice versa) – is true. It makes sense: you bond with the people and pets that act like you, and therefore understand you the most. But at the same time, they also say that opposites attract.

So which idols have the most uncanny resemblances to their pets? There are many, but over years of observation and collection, I’ve narrowed it down to a top five (in no particular order). 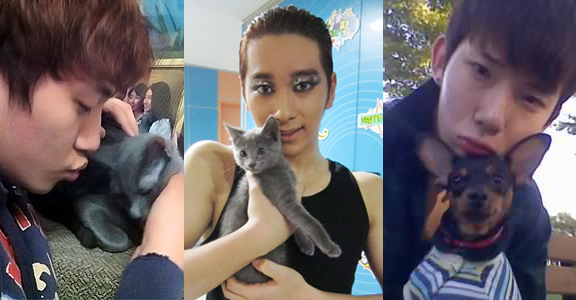 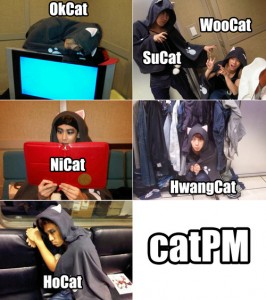 The obvious thing here is that Lucky resembles his owner, Jokwon. Uncannily. Some similarities include the abnormally large ears, the petite and delicate bone structure, and the energetic yapping/nagging temperament.

But here’s something surprising. Although one would objectively expect that members of a ballad group like 2AM would lean more towards preferring cats, while members of a ‘beastly’ group like 2PM would lean towards preferring dogs, it seems that the opposite is actually true. It turns out that quite a few of these ‘beastly’ idols are actually good old fashioned crazy cat (oops – I mean gentlemen. Sorry. Chansung‘s heavy eye makeup confused me for a moment there). Regardless, I have to express my approval, because personally I learn towards being a cat person… and both Chansung and Junho happen to be owners of my favorite breed of cat, the Russian Blue. 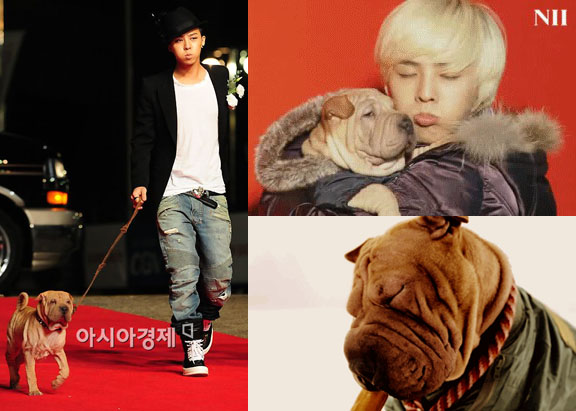 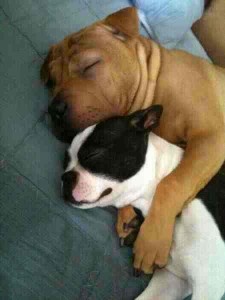 Just look at all those wrinkles! Isn’t he so precious?!??

Okay, so I may be biased because I have a weird fascination with wrinkly dogs. I guess it’s an acquired taste. But guess what? Being a little different just so happens to be the appeal of G-Dragon as well. What he lacks in conventional physical beauty (and this can be argued in a number of ways, depending on personal taste), he makes up in uniqueness and natural swag. It takes a different look and an independent personality to become a trendsetter, and that’s exactly what G-Dragon is.

Gaho might look all tough on the outside, but you can tell there’s sensitivity hidden underneath as well. Just look at him snuggling up to Taeyang‘s dog, Boss. 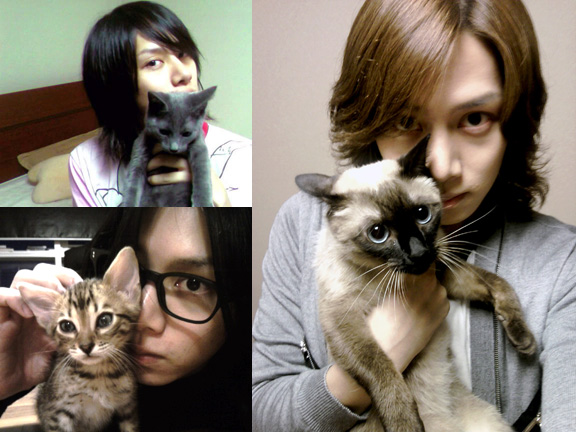 3. Super Junior’s Heechul and his cats: Heebum, Baengshin, and Champagne

Heechul and cats… just works. They resemble each other physically (the huge eyes and feminine features) as well as in personality. Vain, temperamental, highly independent, questionably evil…. but yet fiercely loyal to those that they choose worthy of their attention. And pretty darn cute and entertaining when they want to be.

Altogether it’s a bit of a handful, but that’s pretty much an accurate description of Heechul.

Or alternatively, a cat. 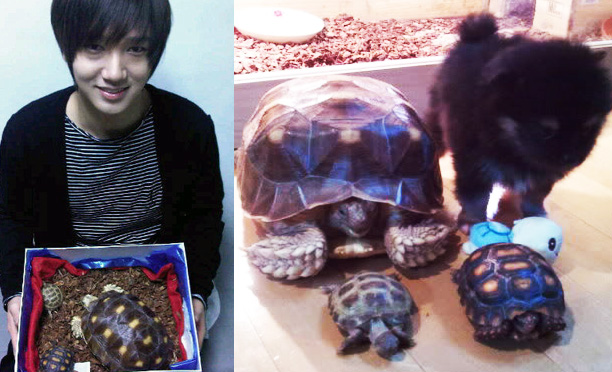 Can I just say, as weird as it is, I cannot think of a pet more suited to Yesung than these turtles? Seriously, it just cracks me up. In an odd but endearing manner. That’s Yesung in a nutshell. Like a turtle, Yesung seems to be moving slowly along his career – never really in the full spotlight and fighting hard for his face to show up on the screens during performances and variety shows. But you know what? Slow and steady wins the race. Yesung has a strong base – he’s an amazing singer – and is steadily accumulating fans and respect along the margins as he goes. I think it’s highly likely he’ll be one of those idols still pursuing music even after disbandment. His unique personality and oddball sense of humor will also help him go a long way.

* (he had to give Ddangkoma up for adoption earlier this year) 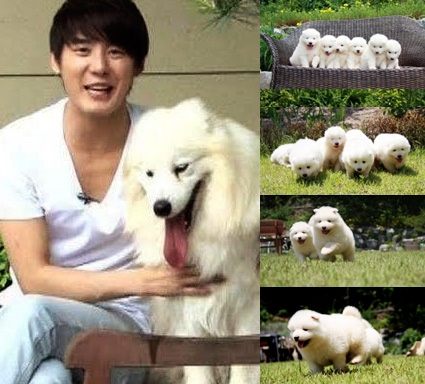 Junsu owns a Samoyed (incidentally, my favorite breed of dog). Samoyeds are also known by their nickname, the ‘smiley dog’, because they seem to have a permanent smile on their face (the edges of their lips actually curve up, which is unusual in dogs). They have a friendly and playful disposition, and are highly intelligent and active. Oh, and they really, really, really, really like to sing.

Oh, and I almost forgot to mention – Junsu also happens to own has six cats.

Well… the more the merrier, right?

What do you think? Who is your favorite idol pet? And for that matter, should idols even have pets?