Has it really come to this? We have SpinEL and other great indie groups, and now we have Clinah, who I expect are their management’s answer to female rock groups who are “relatable.”

At least Clinah appear musically talented: they have lead vocalist Yuna, first guitar Rika, second guitar Malja, and drummer Lee So Woon. However, their management releases statements like this and I just feel dead inside:

“Their title track incorporates guitar and electronic sounds, all making for a fast beat with an exciting melody. Clinah’s image is meant to be youthful and lovely so it all blends well together. They’re going to capture the hearts of rock fans and teenage fans alike,” officials of their agency said.

So they want Girl’s Day with instruments? I know, it’s unfair to make judgements until an album listen, but the statement bothers me to no end.

If I didn’t feel like the whole of rookie groups required this “fresh, youthful style” I wouldn’t have the sneaking suspicion this is just a strategy to get those Dal★Shabet fans gravitating to something that’s different – but not too different. Look, they’re all so cute and photogenic! And there’s even a quirky one, because she wears glasses!

There is also no indication on the album cover that they play instruments; if their bosses, Dino Entertainment, weren’t so gracious to inform us of this fact, who would know? 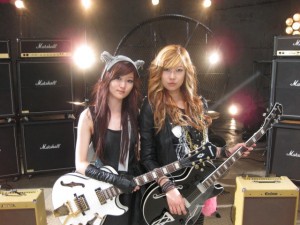 I’m not sure who to be more irritated at, the entertainment company for underestimating the interest of teen girls in a female rock group, or the fan girls themselves, many who pride themselves on being fans of groups like 2NE1 because they are so “different”; what if those ladies played instruments, huh? They would never debut because YG is savvy enough to know there is no market for it.

Is there a cultural reluctance to only actively support female artists who are either all sweetness and light, or sexy and provocative? Coincidentally, both concepts which are often directly marketed to men. Groups like CN Blue and FT Island have nationwide appeal; why is there no expectation that a female version can do just as well?

2NE1 has proven that a female group can subsist on a largely female fan base that they are specifically catering to. Perhaps the absence of most rock music from the mainstream has programmed fans to gravitate toward  familiar pop groups. It’s an easier sell — and well, I wouldn’t be here if I didn’t tell you it wasn’t addictive. It would be a benefit to Korea socially and culturally for that to change but we all know money talks, and maybe executives will find a female rock group worthy of investing time and money into.

To jump off my box of soap, thinking realistically, if a cutesy group is what it takes for a girl band to get attention then so be it. We haven’t seen them play, so maybe they rock as hard as the Rolling Stones. Whoever issued that statement from the company did not help my first impressions – here’s to hoping they are wrong.