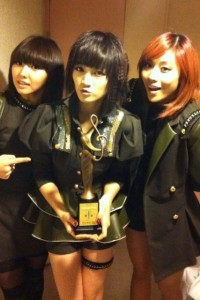 It’s already that time of year! In the world of K-pop, the end of the year has been synonymous with year-end awards shows and festivals. Every year, a predictable k-pop act wins the award and they cry and cry as if it means something. It seems that depending on the network and all the shady business politics behind the scenes, it’s already pre-determined who wins the award. Big entertainment companies like SM, JYP and YG Entertainment rule the shows. On top of that, the award shows are obscenely long. Each act has 30 minutes of performances and each act is ridiculously cheesy. The awards themselves are meaningless, because everyone is nominated in multiple, if not all categories (excluding gender specific categories).

So if everyone gets one, what’s so special about it?

Just in case you haven’t noticed, some acts don’t even show if they aren’t going to win anything.  The only difference is that someone gets it first, and someone gets it last. Why are they even award shows? I think the big networks have the right idea, just have a festival.

Every year, I see a group on the news crying their eyes out, over some piece of metal glued to a block of wood, which is certainly not given out based on merit. It’s like homecoming; it’s a popularity contest. Why can’t K-pop have an award show like the Grammy’s? A legit awards show, not just some 4-hour long music show. Maybe it’s because I’m a bit older, and don’t really care for every group that comes out, but honestly, the same group could come out on stage for 4-hours, and I probably wouldn’t notice a thing.

Quite frankly, I can’t even tell the difference between the groups, they all sort of merge into one, big K-pop blob anyway. Why can’t k-pop give credit to musicians in all different genres. There is only one genre in k-pop now. Idols. Boy idols and girl idols, although sometime the distinctions are questionable. So essentially, the awards are given out like party-favors and don’t really have any meaning associated with them.

So should we be excited that our favorite K-pop act won the last award? I don’t think so, everyone got one anyway. There’s nothing too special about it. So this year, when the borage of award shows start blowing up your holidays, don’t fret that your favorite k-pop act didn’t win an award. They’ll probably win something in the next show.