Why Sweet Revenge should be on your Kpop Radar 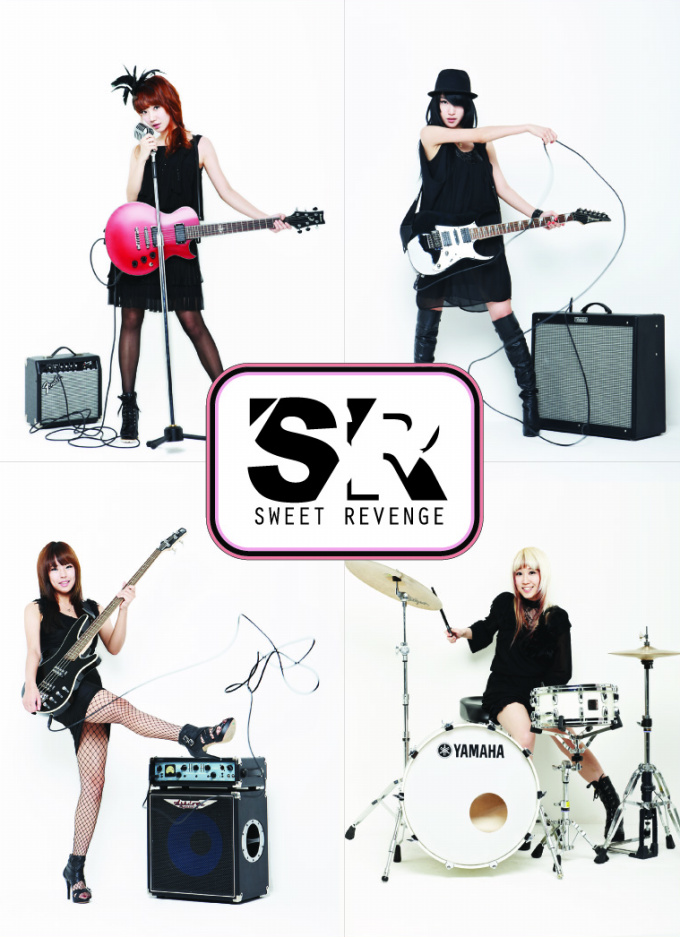 So those of us that have been around Kpop for a while always lament about the same thing:  finding something new in Kpop and having more diversity, especially with the girl groups.  We complain about the aegyo, the stale concepts, the boring recycled music, the too cute or too fake-ly fierce, and the catering to those darn ahjusshi fans.  Well, this is my answer to your complaints… the K-indie girl group Sweet Revenge.  They’re bringing a new level of musical ability to the Kpop girl group playing field and that’s why they should definitely be on your Kpop Radar.

The group is known as the “SNSD of Hongdae” due to the lead singers’ resemblance to SNSD‘s Taeyeon.  Sweet Revenge is made up of members Kim So-yeong on lead vocals, Kim Mi-jung on guitar, Lee Hwa-yeon on bass, and Jang Hyun-ah on drums.  They made their K-indie debut in 2009 releasing two EP albums and created a strong fan base in Hongdae, the breeding ground of great K-indie acts.  They’re now trying to break into the mainstream with their mini album Rule Breaker which was released on August  25th.  The mini album had four tracks on it: 1. Rule Breaker, Space Monster (Intro), 3. Space Monster, and 4. Love Virus.  The band is backed by Mirrorball Music, K-indie’s powerhouse production company, so they’ve got the backing to shake up the Kpop scene.

The girls have the full package:  they can sing (okay the lead’s voice is a little high, but she can sing), they play their own music, they write their own lyrics and music (they composed “Rule Breaker”), and they’re cute- which of course is the least important trait to me, but in Kpop it’s a big deal.  But, as always, what ‘seals the deal’ is the live performance.  If a Kpop group can’t perform live well, they aren’t that great a group.  Check out Sweet Revenge’s debut live performance on August 26th’s Music Bank.

The girls pretty much kicked ass in their performance.  Their playing skills are pretty legit, too.  Anyone else impressed by the guitar riffs?  Some may questioning their actual skills, because as we all know that most times on music shows in South Korea, they make you fake it.  Here are some live performances of Sweet Revenge I found pre-mainstream debut.

I guess they’re drama fans because I swear this is like Korean version of the opening them song of Meteor Garden,  情非得已 (“Can’t Help Falling in Love with You”).

And here’s their performance of “Blow Out’ from GreenPlugged 2010.

Sweet Revenge even snagged a gig performing for dENiZEN from LEVI’S, their Global Casual Denim brand, in their ‘Fit Out, Start Up’ campaign in which Jay Park also took part in.

They kind of remind me of a female C.N. Blue, but with a little more rock ‘n roll.  They paid their dues playing and developing their skills in the clubs of Hongdae, so they shouldn’t suffer the same kind of backlash that C.N. Blue did about being a ‘real’ band.  I really like the girls’ vibe they’re tough, but cute and rock out. They’ve gotten some praise from critics and some buzz about them due to being a girl rock band going mainstream, but the positive influence that they could have on diversity in Kpop girl groups will not come about unless they get the backing of fans.  If their debut falters, other entertainment company will look at it and say “I guess we’ll stay with the same girl group cookie cutter formula” and we’ll get another 5,7, or 9 member Barbie doll group.  I really hope fans support Sweet Revenge- support their music and buy their album.  Because if the Kpop gods offer us a girl group like Sweet Revenge that brings legitimacy, talent, and diversity and we don’t embrace them- we really have no right to complain about what comes next.  I’m guessing a 5 member girl group of 14 year olds with two rappers, two dancers, and one vocalist named Cherry Pop who only wear red, green, or white, have five different hair colors, and whose debut single will be “Oppa, I’ll Be your Cherry Pop.”

So please everyone, give Sweet Revenge a chance and put them on your Kpop radar.