The Idol and the CF 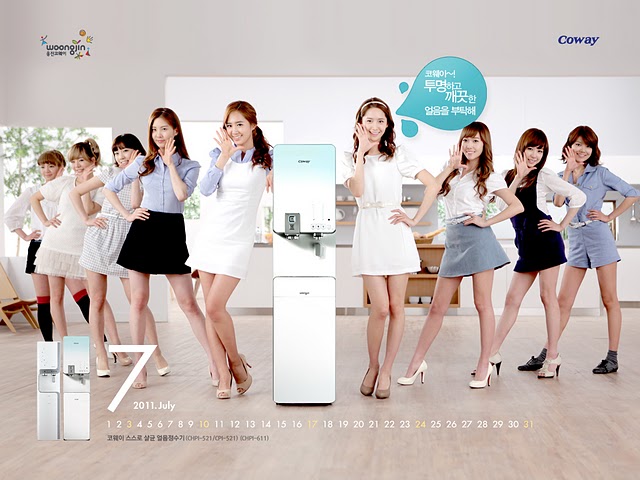 Idols are creatures of the media. They exist to sell, and to be sold. Sometimes, digital sales and albums are not nearly enough for them to make it to the profit margin. Only so much money can be made from the sales of posters and t-shirts, after all. That is where the CF comes in. Idols offer their singing, dancing, and oftentimes simply their faces and names, in support of everything from snack products to water purifiers. Is the idol and CF relationship a healthy one? Or does it add too much to the already stretched schedules of the most popular groups, and detract from the already tiny degree of artistic credibility that most idol groups have?

Very recently, SNSD starred in a small series of commercials for water filter manufacturing brand Woongjin Coway. The CFs themselves were not remarkable. The main commercial was a thirty-second snippet featuring SNSD wondering where their mothers could turn to find a favor, and suggesting the Coway company. Personally, I was baffled.

What does an idol group have to do with water filters? But clearly, this was not much of an issue to the general public. Woongjin Coway experienced an increase of sales of 400% in the quarter following the marketing campaign. SNSD are perennial CF stars, with products adorned with their faces flying off shelves, and into the hands of devoted fans and casual listeners who simply recognized their faces alike. They are certainly not alone in this phenomenon; any major idol group is bound to have multiple CFs under their belt. The reason is simple: the advertisement provides a source of income that they would not have had otherwise. Starring in CFs is often to the benefit of the idols themselves. Earnings from these ventures significantly pad their usually sparse incomes, and get their names out to an even wider public. Now, the ajummah who might never have bothered watching an episode of Music Bank will now recognize the members of any given idol group from that bag of chips that she bought at the supermarket.

However, CFs are not always such small, cheesy affairs. There’s been many a song and dance in the name of a product, from f(x) and SNSD’s shared “Chocolate Love” cycle, to the popular Big Bang song “Lollipop,” which launched 2NE1 into Kpop superstardom and even spawned a “Lollipop pt.2.”

These videos are often as intricately choreographed and styled as a regular MV may have been; sometimes the quality of the CFs can even transcend that of the group’s regular promotions. In fact, it can get to the point where one is unsure whether the video in question is a CF or a regular MV. As someone who tended to stray away from mainstream music before delving into K-pop, this made me distinctly uncomfortable. I understand that the primary job of an idol is to market themselves and make their company money.  However, the idea of having a marketing strategy centering on getting millions of impressionable young fans to listen to commercials, thinking it to be serious music from their favorite idol comes off as faintly tacky. There should be a dividing line between the music and the product placement; otherwise, who’s to know if you’re singing along to nothing more than a jingle for snack foods? What if entire albums devolve into nothing more than convenient product placement? Idols are shallow enough as it is, but the inclusion of advertisement takes the whole affair from the realm of profitable fantasy to pure corporate schmaltz.

But how much is that money worth, when it stretches an idol’s already thin-spread schedule? SNSD are infamous for their grueling schedules; additional filming cannot be a help. The strain definitely showed in their CF for HP Intel, “Visual Dreams.”

It was cheap and sloppy. It was hastily put together, and the girls looked tired. It made no one but HP happy, and even the most devoted fans were quick to point out the poor quality of the venture. And certainly, the Woongjin Coway advertisement could not have been easy to cram into a schedule already filled with overseas promotions and concerts. In the end, it becomes an issue of what has more weight: limited artistic merit and free time, or cash and a successful industry. CFs have now become necessary to perpetuate the idol industry. But should a more careful dividing line between music and advertisement have been drawn?

Do you think the pros of CFs outweigh the cons?