Well, this is the most unremarkable thing I’ve seen in a while.

So I could whine, bitch, and complain, but really- is anyone actually surprised? I think Super Junior is that one band you need to have literally no expectations for; otherwise you’re just going to spend your whole life wallowing in disappointment and pity. But it isn’t like I like them for their artistic merits or something, so I’m okay. Underwhelmed, but okay.

Although is it just me, or is this video the most boring thing to come out of SM in a while? It is exceptionally unremarkable, to the point where I couldn’t even comprehend I was watching something. As in, if this music video was a person, I would be friends with it. Because it is lazy, makes little sense, easy to mock, and awkward to watch. Just like me. This is not a good thing.

I’m not sure whether or not it’s because I’ve been spoiled by well-made and thought provoking music videos in the last few weeks, but this MV’s blandness is only rivaled by one other. At least Super Junior’s other cookie cutter MV releases Mr. Simple, BONAMANA, and Perfection weren’t a complete bore to watch. They at least had some kind of relevant camera work put into them, the production team attempted something resembling flow, and the MV was at least at pace with the song. But with ‘A-Cha’ it’s really like they aren’t even trying anymore – which they probably aren’t, but I’d expect them to try and hide it a little better. This music video is so boring, I can’t even let myself believe “well… at least it’s aesthetically appealing”. One reason being, well, it tried too hard with the aesthetic appeal. I felt like the MV relied too much on the solo shots and close ups of the boys’ pretty stature and faces- which ultimately resulted in the music video losing the fast pace that a song and dance like this so desperately needs- I’ll discuss this more later. Now, the other reason is more petty. I have two number one favourites in SJ, and what are the chances both of them are stuck with unimpressive styling and dye jobs? WHY CAN’T MY BOYS BE PRETTY TOO!? Pout. Cry. Sigh. 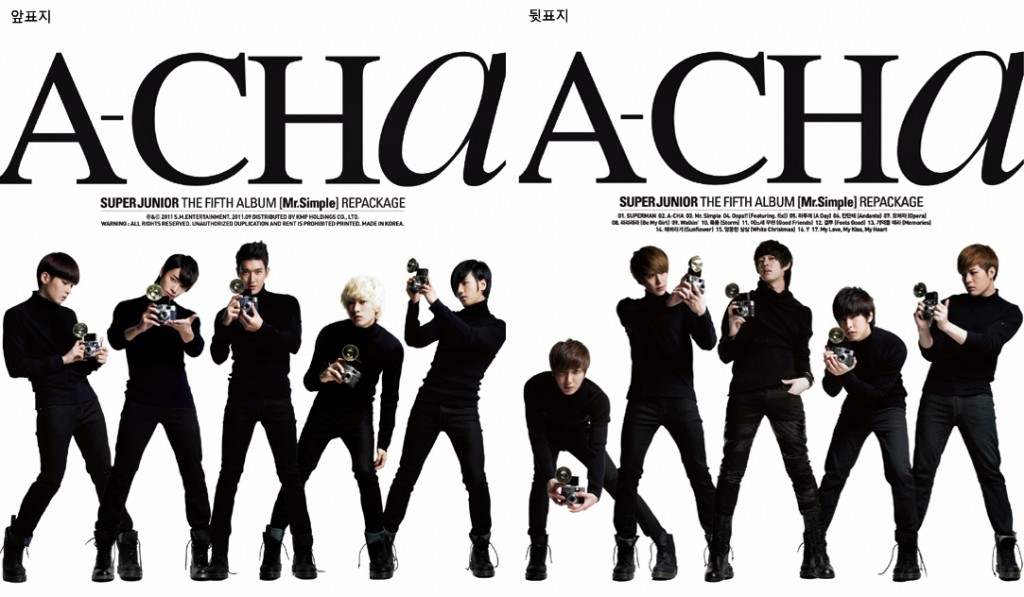 On the other side – and I’m not necessarily sure whether it’s the positive side – it looks like SM learnt some new special effects that they’re trying out. I am of course talking about that strange little mirror and masking overlay effect. The mirror thing is something new, but we saw some of that masking overlay used sparingly in SNSD‘s ‘Hoot‘. Of course they completely abused both this time around- most probably to distract the viewers from the little amount of effort evidently put into the MV itself. I’m not sure about everyone else, but it sort of backfired. Because the dance actually isn’t too bad. I didn’t really realise this until watching the live performance on Inkigayo, but there’s a lot interesting little tidbits involved in the routine, that with the right camera work, could actually turn out to be pretty pro in the MV. Instead however, we are left to deal with awkward shots like this:

And then we had SM try to be all cute and classy by putting some strange abstract-ish shots involving liquor, fire, and playing cards. Possibly trying to imply that the MV has some deep, classy meaning behind it- it’d almost be endearing. You know, if it wasn’t so cringe worthy.

The song itself has already been torn through with a stake, so I really don’t have anything to add to it. But check out the boys’ live stage at Music Bank: it’s nothing extraordinary, but I think it’s significantly more entertaining than the music video – even if the only entertainment you find is in the masochistic pleasure of watching pretty men come close to absolute exhaustion. Things to look out for include: EunHaeMin’s little leap, Ryeowook’s ad-lib, Leeteuk’s pro lip syncing, Kyuhyun’s extreme sleep deprivation face, and last but not least: the one thing in this entire article I’m not being remotely sarcastic about- the fact that there’s only 8 members left on stage… 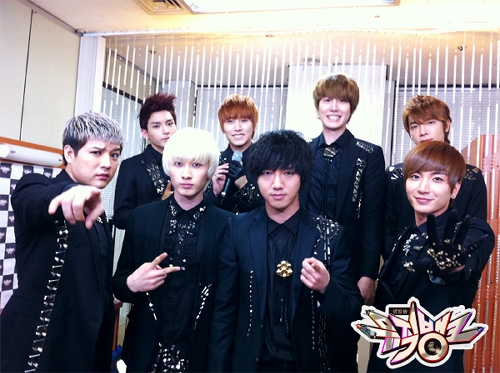 (Too many feelings. Can not compute. Sad face.)