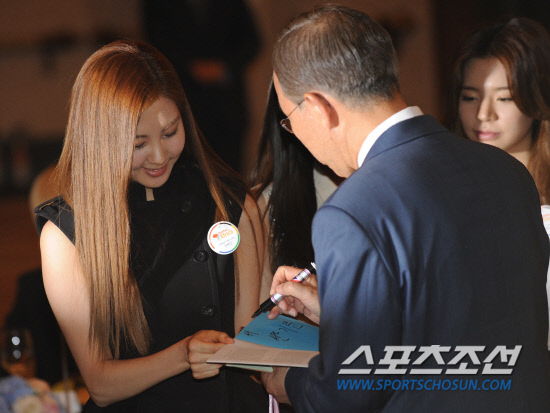 The meeting took place on August 12th, at the inaugural ceremony for UNICEF’s ‘Together For Africa’ Project. During the event, Seohyun presented Ban Ki-moon with a handwritten letter, a SNSD album, and some vitamin supplements as gifts. She was able to obtain his signature on a copy of his autobiography, ‘Study Like A Fool And Dream Like A Genius’, along with the personal message: “World peace through your music of love!”

Those who have watched Seohyun on “We Got Married” are already familiar with how much she looks up to Ban Ki-moon as an inspiration on how to live her life, having discovered his books at a stressful point during SNSD’s debut when she needed good life advice. Her profound respect for him as a man of talent and good character is one of the first things that her fake-husband Yonghwa learned about her (much to his bewilderment), and in later episodes, she even goes to the extent of buying Yonghwa a copy of Ban Ki-moon’s autobiography and getting him write a book report on it!

While her choice of a role model outside of the entertainment sphere might appear to be uncharacteristic for an idol singer, it is actually very practical. I’m not saying that there’s anything wrong with idol singers (especially those with musical talent) dreaming of continuing in the footsteps of other older and more accomplished singers. However, the sad reality is that most idols won’t be lucky or talented enough to continue a high-profile career in the entertainment business for more than a decade. The fact that Seohyun is looking forward and preparing for her future outside of SNSD (she has stated she has dreams of being a diplomat) is a very smart move.

Even more importantly, Seohyun’s example sends a much-needed message to the younger k-pop fans that it isn’t any less cool to want to be academic and dream of a career outside of being a k-pop star. In a country whose idols are not primarily singers, but rather representatives of the youth culture that sets the standard for how one should look and act, the reach of their influence bleeds pretty far out from the musical sphere. Idols are abundantly present in fashion, musicals, dramas, commercials, and public events as cultural ambassadors. Therefore, it comes as no surprise that a problem is arising in which idols are increasingly becoming the sole source of role models for children (other public figures just don’t seem as relatable). And if the youth are inadvertently trying emulate their idols, it only follows that their idols’ dreams and visions also become their own. 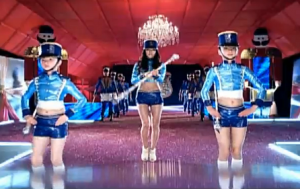 This is not to say that having a singer as your role model is necessarily a bad thing. Artists play just as an important role in society as scientists, businessmen, and doctors. However, it used to be that only those with an inherent and undeniable talent at singing or acting pursued those career paths, because only those with confidence in their abilities could afford to take the risk. Nowadays, an idol singer does not have to be good at singing to be successful, as long as they have (or can be created into) a pretty face. Trainees don’t need to be anything else but a blank canvas, to be trained and groomed into a final product.

The problem is- being able to debut is one thing, but having the ability to stay relevant for the rest of your life is another story altogether. Many existing idols and trainees with or without talent are increasingly throwing away any other dreams and interests (even their high school education) for their five seconds of singing time on stage. Similarly, many children without especial talent at singing are dreaming about becoming singers (for the glamour and fame) and consequently wasting their real talent and potential towards other sectors of society. The idols’ dreams are the children’s dreams, and so consequently the idols’ idols are the children’s idols. 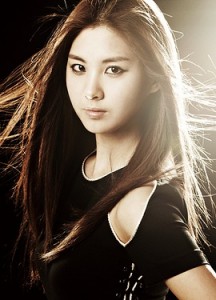 This is why I get so excited when someone like Seohyun comes along. People newly discovering her often are surprised at the level of maturity she displays not only in her mannerisms, but also her interests. However, if you really think about it, Seohyun and the majority of our other favorite idols are actually in their twenties – at an age when one would normally be enrolled as a bright college or grad school student preparing for their future. The fact that she is revealed to have deeper thoughts at her age is something that objectively should be normal. We oftentimes forget that idols purposefully act younger than their age, and dumb themselves down to the public to seem more humorous, cute, and appealing. They are selling their  images to us, but not necessarily showing their real selves. I can’t say to what extent the ‘innocent’ side that Seohyun portrays is an act, but I do believe that the ‘mature’ side of Seohyun is simply her being herself, and that speaks in much larger volumes than any carefully tailored action.

An idol teaching by example through genuine actions is actually a much more effective way of influencing the youth than a lecture from an adult. And I don’t mean those public service announcement songs about buckling seat-belts and drinking milk (they’re super cute… but basically ineffective since no one takes the lyrics of k-pop songs seriously… please take note MOGEF]). Idols have a lot more power than they even realize, except that normally they choose not to exercise it or are banned from doing so. I firmly believe that many problems with k-pop fan culture could be solved if only idols were given more freedom to express their true thoughts and feelings. If they act like slaves to the fans, the fans will treat them as their slaves. If they act like humans (and show that they have a right to be in romantic relationships, for example), the fans will eventually learn to respect them as humans. If they tell their fans to reach for their true dreams, they may just listen. The realm of influence of the idol is massive. Who knows, maybe letting idols act their age (being mature rather than childishly cute, and showing a diverse set of interests – such as Seohyun’s political ambition) might even influence a generation of fans to grow in maturity as well.