On September 17th 2011, G-Dragon commented that Korean actress Kim Min Hee is an ultimate true fashionista during an interview.   He said

Kim Min Hee nuna is able to pull off any sort of style. Every time I see her, she has this really distinctive flair that I think is amazing. Sometimes she’ll look boyish, sometimes innocent, and sometimes even sexy. She doesn’t stand out too much and matches to every situation she’s in. I think she’s pretty even in just a white t-shirt and jeans. 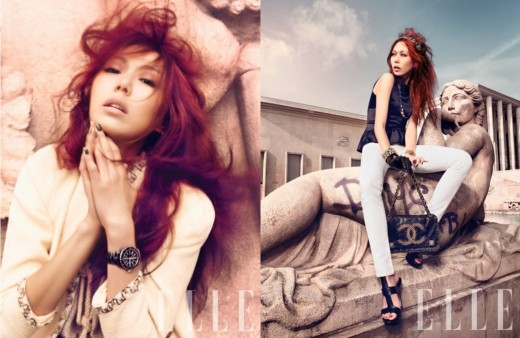 G-Dragon and I see eye-to-eye on this because I truly admire Kim Min Hee’s fashion sense as well.  The model turned actress is able to pull of any style and express herself through fashion.  And because of her looks and style, she is one of the most sought after models for CF’s and fashion magazines.  Nobody would argue that Kim Min Hee is one of the most talked about fashionista of Korean entertainment

However, as much as I like Kim Min Hee’s fashion senses, when it comes to acting, her skills are questionable.  Looking back at her past projects, there aren’t any dramas or films that makes her stand out.   As an actress, I would assume she would want to be known as an actress rather than a model.  Instead, she just continues to receive attention from the press about the outfit she donned, the hair style she’s sporting and the accessories she’s wearing.   Although Kim Min Hee continues to improve, I wonder if she would be ever to leave her “fashionista” label and really achieve herself as an actress.  Hopefully she will prove us wrong with her next movie, “Train” directed by Byeon Yeong Joo.