A Western Band with a K-Pop Obsession

There’s something about the West. We are behind. Literally in time zones, but also musically. Many westerns are unfamiliar with the genius that is K-Pop and many do not view it as a serious music form. In the U.S. it remains a niche genre, but with K-Pop concerts being planned in New York, and American performers such as Ludacris raving about the talent from YG Entertainment, I predict a K-Pop Western invasion. 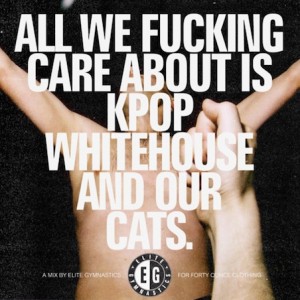 I envision Korean idols flocking over like the Brits in the 1960s and more American performers taking notice. One band in particular already has. Elite Gymnastics, a two man group from Minneapolis sites K-Pop as a major influence. The two musicians, Josh Clancy and James Brooks, list themselves under the K-Pop genre on their MySpace, but don’t expect their music to sound identical to Hyuna’s “Bubble Pop” (which James and Josh describe as “the perfect song. I can’t believe it. [We] love that song.”)

Elite Gymnastics have been making music together since 2008 and one of their first releases was a mix titled ALL WE F*CKING CARE ABOUT IS KPOP WHITEHOUSE AND OUR CATS. I spoke with Josh and James about K-Pop, a topic they said they could easily talk about all day.

Chloe: When did you first start listening to K-Pop?

James: I like to follow a lot of different music, a lot of different genres from different parts of the world and K-Pop obviously made a huge international splash a couple years ago with Girls Generation and continued on from there. I started getting really into it around last year and especially this year because musically I feel like some of the newer stuff, the Cube Entertainment stuff like Beast and 4minute, especially 2NE1, musically it’s way way ahead of anything else in the [pop] genre anywhere in the world.

Josh: I would definitely agree with that. And just considering how they use English in their songs, but they’re not doing it for Americans or Western culture by any means. They’re using it as language and that’s really advanced in terms of making music.

Chloe: When you share K-Pop with your friends do they have the same level of excitement as you?

Josh: My least favorite reaction that I get from people is if you show them the videos. Especially by the female idol groups. I don’t think they’re really overtly sexualized, but I think that it’s seen as somewhat pervy to American people. That’s such a shitty thing to have to deal with in conversation with people. There are so many people who can’t get past the language barrier, can’t get past the race barrier, can’t just take it on it’s own term. And we run into a lot of that with people we know. There’s a lot of trending towards darker more serious stuff. People are less willing to take the Technicolor, hyper everything aesthetic of K-Pop seriously.  But we love it [laughs].

Chloe: What are your favorite things about K-Pop?

Josh: With K-Pop some of the production is just so crazy and so out there and so forward thinking.  And it also just functions as pop music. The melodies are strong and it’s a complete package.  It’s not just a great single. You have larger than life personalities and these awesome dancers and everything that goes along with it.

Chloe: Do you see K-Pop becoming increasingly popular in the US?

James: Our manager is always giving us updates because he lives in New York. He really thinks that it’s starting to take off. There is something definitely cooking over [In New York] and the Western world is actually starting to take notice. As far as specific artists from [Korea] coming over here, I’d like to see that.  I think 2NE1 are amazing and they have the chance to do that. At the same time there’s this weird kind of wall.

Josh: There’s a barrier for sure.

Chloe: In what way’s is your music inspired by K-Pop?

James: I don’t know if it has that much in common with K-Pop musically. Our creative process is a lot more impulsive and instinctive. We take influence from a lot of different things and we do whatever feels right. So it’s not like we ever sat around and thought,  I want to make something that sounds like K-Pop or that can compete with it at that level. I can see places where that influence comes out, and I think in the future you’ll hear a lot more of that influence from us.

What do you think?  Do you think that K-pop can influence other western artists or are Elite Gymnastics an exception?