Say Goodbye to Summer With A Special Dance Stage 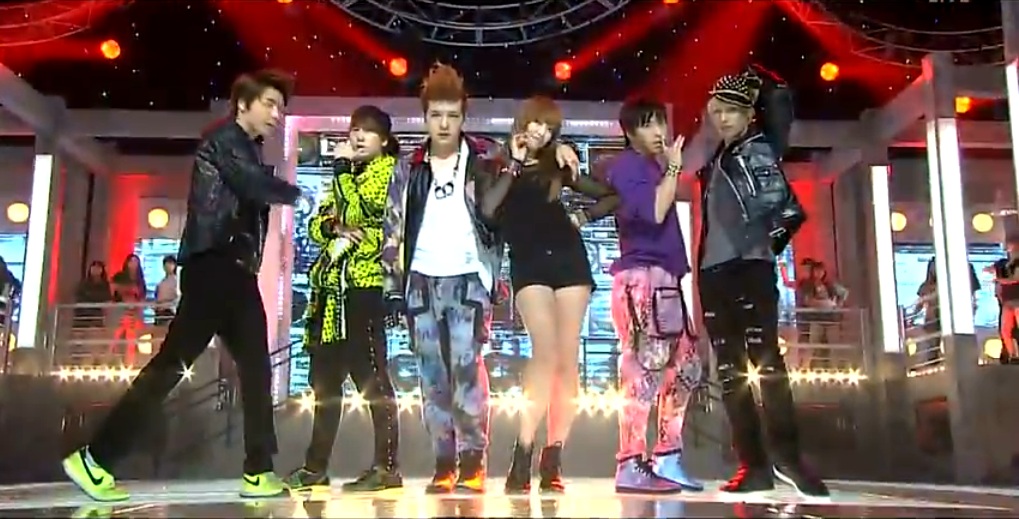 One of the chief complaints I hear from non-Kpop fans is the repetitiveness of the music shows – four times a week is a bit excessive, and you can be viewing the exact same performances note for note for over a month.

In some sick twisted way I enjoy all of it but it is perfectly understandable why others do not. So it’s nice when the PDs decide to change things up a bit;probably to the detriment of the poor idols who now have more choreography to learn but generally a nice respite from the the same-old every single week.

Or at least it’s supposed to.

Infinite did a hip-hop/b-boy routine to English songs ‘Foolin Around’ and ‘Freeze.’ Infinite has come a long way as a visible boy group – I see them now and they are shades of what 2PM could’ve been, Jay Park Era. Even if they are selling me an old bill of goods I like how they are doing it. However, I’m still waiting for a girl group to rock that type of a routine.

How do you do a dance stage without Miss A? You can’t, that’s the answer. The closest we’ll get to some real complicated girl group choreography at this juncture. Suzy’s dance moves are still impressive – but I finally noticed an observation others have been making, that she’s not as natural a dancer as the others. On that note, a comment on how old-school JYP’s style is. It’s not retro (unless on purpose) but I always feel that he’s memorized every hip-hop/r&b performance from his youth and expressing his childhood through his artists.

As you noticed, K-pop special isn’t a special dance stage without Michael Jackson either, as we prepare for the one-millionth cover of bowler hats and crotch-grabbing. In contrast to Infinite whose performance was admittedly less complicated, ZE:A is like wallpaper to me. Perhaps the Michael tribute didn’t improve matters since there isn’t much personality to be had with a stage full of ‘Smooth Criminal’ Clones.

Teen Top. Vanilla Ice. Brilliant. Maybe not something the boys will want to watch in a few years but perfect. Also I think someone’s been watching a little Glee Project; Teen Top could be the next wave of exchange students on the show. Ryan Murphy would be proud. But performing ‘Jump’ and no backwards jeans? For shame.

Sistar, and another exhausted idol  forgets their moves, though they weren’t given anything technically difficult. Same Pussycat Doll moves which is disappointing to say the least. Especially since I like that song.

In another move that might have indicated that this whole thing Was Probably Not a Great Idea, f(x) and Super Junior performed together. Apparently this stage was beset by injuries (Luna was supposed to be there).This was probably the most entertaining special stage, in no small part due to the combined groups (well Suju and Victoria). Victoria is also a recognizably good dancer, which helps.

T-ara did another Roly-poly stage, at least used  the same moves. Now, I’m not anti-disco but I have a low threshold for it. On the other hand, these girls likely had just hours to learn this, so I can’t blame them for recycling moves.

And now, for the dance stage Sony Music apparently doesn’t want you to see. “Wild Horse” HyunA is at it again. And again it’s much ado about nothing. They used the clean version of that song for heaven’s sake! Sony should be glad someone is still performing it.

All in all,I wish we could see more combos like Super Junior/Victoria as opposed to an idol group doing a “special stage.” What, I see them dance together every week! There were so many opportunities wasted – Minji could have shared a stage with ZE:A (or really just done one by herself) Heechul could have volunteered to be bad boy friend in ‘Hate You’, I’m surprised Hyuna and Super Junior couldn’t cross paths. If we can’t get recent music SONY, I would rather see some creative stages. Ah well, even with all my criticism, it was still a fairly entertaining Inkigayo.

What was your favorite stage? Do you agree that they need a makeover? Also, what was up with lackluster Encore stage from Super Junior?