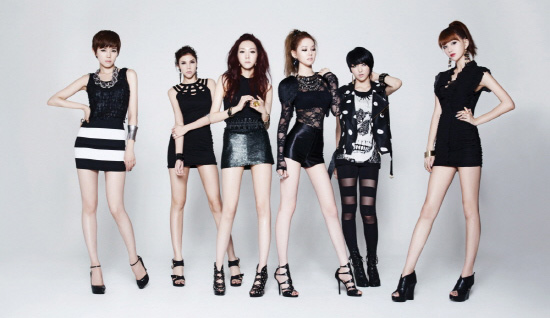 In September the world of Kpop will have yet another girl group named April Kiss, under Andy Brothers Entertainment.  They have been dubbed the “female 2PM” with 6 members, Soomin, Kuji, Haejeun, Sara, Julie, and Shiho. According to Andy Brothers

All of the members have refreshing looks and tall, lean bodies. They can not only pull off impressive performances, but are also highly talented in the areas of dancing, singing, and rapping. Their average height records at 173 cm, so all six members have beautiful long legs that will surely bring joy to those watching them. They all promoted in different areas before coming together under the mutual dream of becoming singers. They’ve undergone severe training ranging from three to five years. Although they’re a female girl group, they’re capable of a performance style like 2PM’s.

As lovely as all this sounds, I will believe it when I see it.

From what I have seen of April Kiss I’m less than impressed and would not even dare to compare them to 2PM. Back in 2010 Andy Brothers released a teaser for an unknown song, which went from OK, kinda boring to crash and burn. The teaser surely did not showcase any singing talent hyped by their entertainment company. Their voices weren’t even to par with some of the weakest singers in kpop. Nor did it showcase any 2PM like skills. All you see is 6 women oohing and ahhing and whinning in really sexy clothes with really large holes ( one had a huge hole showing part of her chest and her stomach, either wear a crop top/ bustier or wear a hole-less leotard) .

2PM like?  I think not. Before an entertainment company claims their new and upcoming stars are the female version of this or the male version of that, they have to make sure that it’s actually true.  Groups like 2NE1 or SNSD are truly the female counterparts to the male bands. 2NE1 is like Big Bang in style, genre, and sheer entertainment value. SNSD is like Super Junior in that they are extremely cutesy and ridiculously large.

It appears that Andy Brothers Entertainment is relying on 2PM’s fame to push their group into the spot light, which is not cool. Over hype of a particular gimmick such as the “female 2PM” will not work out well especially when they don’t deliver on that promise. Groups cant just be like ” hey look at us we can sing and dance we are like 2PM and were pretty ‘like us’ !”…..this is not Facebook. Live up to the hype (or at least adopt a permanent gimmick that never wears off) or you never reach the kind of superstar fame of Korea’s top idols. I would have been happy with them being dubbed the ‘sexy’ group as its easy to pull off and more believable rather than trying to live up to another groups standards and style. Besides, last time I checked wasn’t Miss A the female version of 2PM?

Maybe when they do a debut stage I can truly see their supposed talent, and they will be all they claim to be. I truly hope that less than stellar teaser was just a dark spot on the group and not a sign of things to come. However, unless I see something extraordinary on their debut stage, my opinion won’t change much. On a lighter note though, I do think it’s quite nice that the average age is 23 and not 14-17. It’s not often we get to see an older girls debut. Here is their teaser though, what do you think? Am I wrong in my judgment?