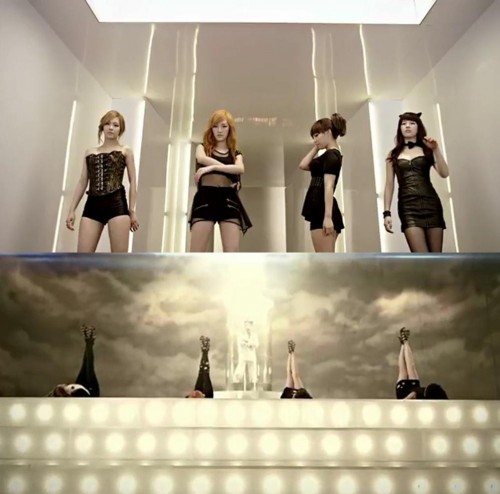 Miss A garnered a lot of love and praise with their debut; but do they continue to deliver with their comeback “Good Bye Baby?”

Miss A brought it. They brought it good. I’m not a HUGE fan of the song itself but there are definitely some interesting things in this MV that are worth talking about.
As much as we all love KPOP, I’m sure we can all admit that it’s not exactly brain food. But in this MV, we see the beginnings of not only creative thought, but intellectual thought as well. I really enjoyed the ticking clock, the cherries, the fire, the legs–it was all good stuff. I’m not saying that we should Siegfried Kracauer this MV but hey, it’s putting in an effort that cannot be found in mainstream KPOP.
Speaking of mainstream, KPOP’s attempt at appealing to an international market has consisted of throwing in some poorly pronounced English and the occasional Caucasian girl. But headlining news everybody, the international market consists of more than poorly pronounced English and Caucasian girls; it’s nice to see this MV acknowledging that. It’s not perfect but it’s definitely a progressive step in the right direction.
As for girl power? Though other SB writers have that covered, I will say that female empowerment is much more than putting on a black outfit, throwing on a crap load of eyeliner, and vocally raising the middle finger to a male counterpart. MUCH more than that. Is miss A succumbing to this? Not exactly. In fact, they’re furthering the narrative of feminine strength in KPOP, whether it be “Love Again,” “Bad Girl Good Girl,” or “Good Bye Baby.” They’re able to accept and deny men, all the while maintaining their feminine composure, backbone, and elegance. But at the end of the day, they’re still finding their strength in some shape, form, or relation to a man, whether it be loving him or hating him.

They’re talented; there’s no denying that. And though I won’t dive into all these topics but the fact that we can even think about all these things from one MV is definitely another achievement for Miss A. Congratulations to them! I definitely look forward to seeing more.