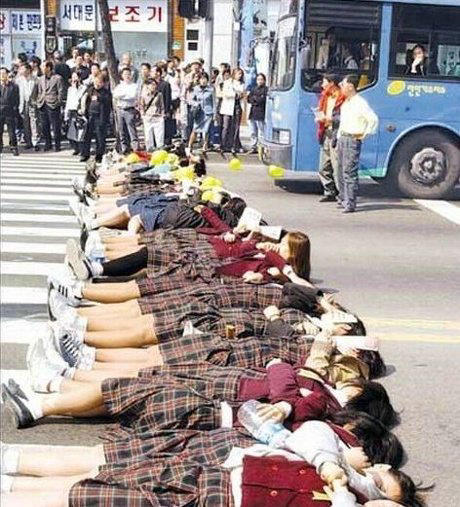 A DBSK fan protest from years ago.

It’s nice to see the youth is fighting for something in which they believe. It doesn’t always have to be about war, civil rights and debt ceilings. Sometimes it’s about the right you have to see your favorite entertainers on TV.

As many know KBS has been under the thumb of SM and not allowing JYJ to appear on any of their programs. Things came to a head when, according to JYJ_PH and JYJ_love, they “cancelled JYJ’s public television appearance in connection with the New 7 Wonders of the Natural World promotional campaign for Jeju Island.” Once again the corruption in Korea’s entertainment system makes itself evident and, once again, fans are saying enough.

KBS’ deception, extortion, theft and collusion with external forces come at the expense of international consumers of the Korean Wave, many of whom are suffering prejudicial financial damages as a result of KBS’ unlawful and unilateral decision.

While I was never the biggest DBSK fan, I respected the boys’ decision to get out of an unsavory contract and realize their worth as an entity separate from SM. This hasn’t worked out well for them as of yet, with the disastrous American leg of their world tour (they couldn’t make any profit) and limited presence on variety shows;  KBS isn’t making it any easier. I believe in what their fans are doing, standing up The Man.

The best part of these fans speaking up is that they are international fans. And if you remember, KBS released a ridiculous statement claiming that having JYJ on their channel was a disruption and taint of the Hallyu wave. By international fans standing up and saying, “actually, YOU are messing with the hallyu wave, KBS” it turns the already idiotic logic on it’s head.

Parts of the letter are  rather too intense for the matter at hand, but when all is said and done, what is happening to JYJ indicates a bigger problem that needs to be addressed and any attempt to point it out is beneficial.

Go here for full text. And for another opinion on the JYJ mess, check this out.