That's not how a jive actually works, Hyuna 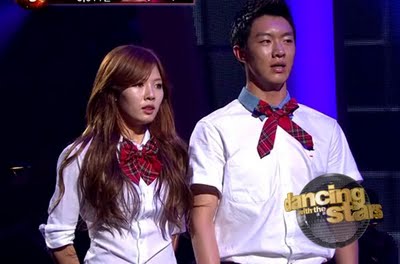 When news broke of a Korean version of Dancing With The Stars, I could smell the eminent disaster from miles away. But a part of me was somewhat morbidly curious about the show, as Dancing With The Stars is one of the few programs currently on American television that prominently feature celebrity guests – a practice that is all too familiar to the Korean variety show scene. I wanted to see how Korea would adapt the format of an American show and implement that ‘celeb guest’ practice that Korea is so good at. I wasn’t expecting much, but I had hoped that the Korean show would take advantage of the fact that so many Korean celebs are already slightly-above-average dancers. Given that, we probably wouldn’t have another case of David Hasselhoff flailing to “Sex Bomb” on the ballroom floor, at the least.

And we didn’t, but that doesn’t mean that the performances were any less unimpressive. Dancing With The Stars broadcasted live for the first time in Korea this week, and the highlight of the show (and the series, for that matter) was 4minute‘s Hyuna – but mostly because she was the only celeb on the show that people had actually heard of.

Hyuna danced the jive with her partner Nam Gi-yong this week, but I’m not really sure if I should even call it a jive because uh…it wasn’t really a jive.

What I love, though, is how everyone seems to be hating on on Hyuna’s performance (just take a look at the like/dislike bar on this Youtube video), and yet there are hoards of people gushing over Yunho and Krystal on Kiss and Cry. Maybe it’s because Hyuna’s the only significant celeb on DWTS at the moment and she seems to be gathering more haters than fans as of late – but it’s the same deal, guys. Kiss and Cry is essentially the suckiness of Dancing With The Stars with a pair of ice skates.

Back when Kiss and Cry first aired, Amy wrote an article saying that she felt the show to be an insult to the professional figure skaters who put in years of hard work to gain the level of recognition that Yunho received for “moonwalking on ice.” Dancing With The Stars is no different – I’m a member of my university’s varsity ballroom dance team and it was pretty irritating for me to see Hyuna do a little schoolgirl dance (in sneakers, dammit) and a few sloppy basic jive steps and call it a day. The judges didn’t seem to have much to say about the performance other than “Well, I guess it was nice, and I liked her ‘style'” – not that the judges themselves had much authority on the subject. One judge is a musical actor, one is a ballet dancer, and one is a dance sport manager.

All in all, this show reeks of cheap in every direction and we all know it. A (heavily delusional) part of me was wishing that the Korean version of Dancing With The Stars would completely trump the American version and show the west how celeb reality shows should be done, since Korea already televises their celebs so well and since the closest thing America has to a successful celeb reality show is Jersey Shore. But after seeing the messes that were Kiss and Cry and Dancing With The Stars – ROK Edition, I’m just left shaking my head and switching back to old episodes of Family Outing.