SNSD - No Joking in Japan 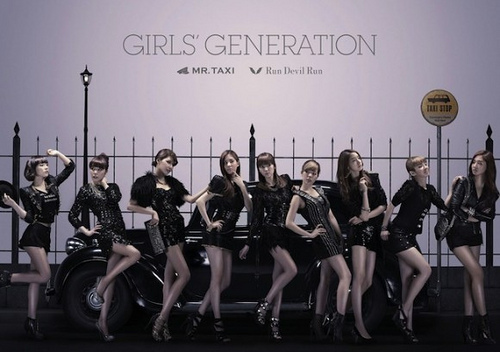 So Nyeo Shi Dae (or Shoujo Jidai as they are known in their new host country) recently performed on one of Japan’s regular music shows, Music Station. Is it just me, or are they actively going for a sexier, more adult image for their Japanese fans? Just me? Well I have to say, even if it’s a temporary concept, I like it. Sure, we have some of the awkward dancing that plagued “Run Devil Run,” but I consider that part of the entertainment – just keep your eyes on Hyoyeon.

I even quite like ‘The Great Escape’ and ‘Mr. Taxi.’ Both songs sound more of a natural musical progression for them than ‘Oh’ or even ‘Hoot.’ They are – less gimmicky? In any case, SNSD’s Japan personae kick ass all over their Korean ones, forever and ever Amen.

I’m  noticing a strange  desire for a KARA ‘good girls’ image versus a SNSD ‘bad girls’ one. It’s interesting in the land of Hello Kitty and “kawaii” SNSD  appear as “untouchable goddesses.” Not significantly so, but for a group of girls in their early 20’s I’m sure they’re yearning for a move toward sophistication.

After years of arrested development it’s time to say ‘ok’ to leaving the pink and the costumes behind. It may feel awkward in the beginning, but (with some reign-loosening) SM, you may luck out with a better group in the end.